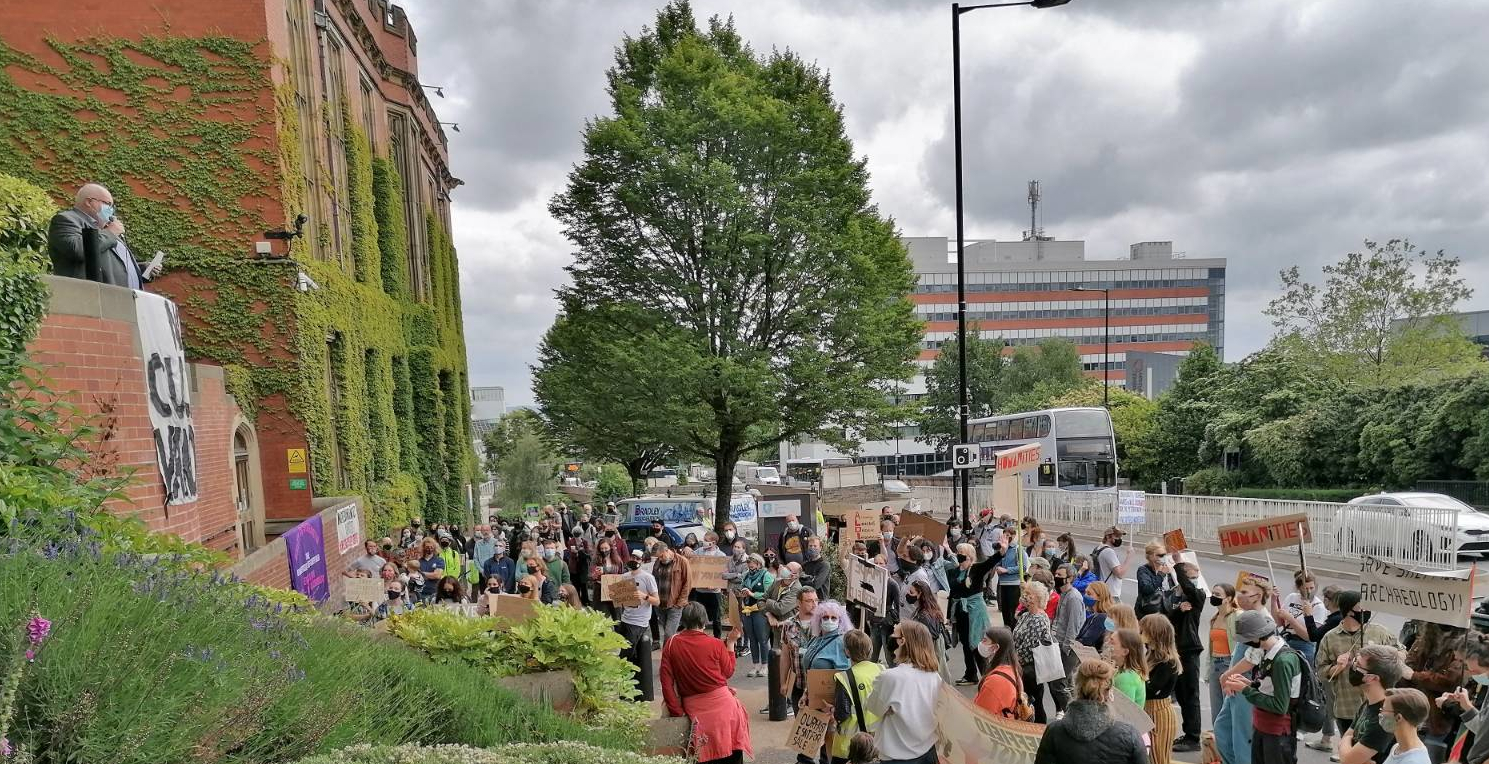 Fresh questions have been asked about the objectivity of the process which has led the internationally famous Department of Archaeology at the University of Sheffield to the brink of closure. In particular thePipeLine can reveal analysis by a professional quality assurance expert which appears to show that, with the exception of two external consultants, all the individuals who have been involved in the production of the Institutional Review of the Department are now involved also in the decision-making process, discussing, approving and then implementing the controversial Review. This is a situation which appears to lay senior University officers, including Vice Chancellor Professor Koen Lamberts and Deputy Vice Chancellor Professor Gill Valentine, open to the possibility of Conflicts of Interest [CoI] leading to potential bias in the decision making process. This is a situation which international standards suggest should be avoided by all well run companies and organisations and thus also calls into question also the competence and ability of senior University officers to properly manage the complex risks inherent in managing effectively a modern University.

This analysis of the potential exposure of the Sheffield University Executive Board and the University’s most senior officers to Conflicts of Interest was created by a scientist and quality assurance professional who has worked in various sectors of the economy, including for a FTSE100 company, who has asked to remain anonymous.

The work was offered Pro Bono.

The first stage in the analysis was to identify who among Sheffield University management, teaching and administrative staff was involved in the Institutional Review of the Archaeology Department and other relevant governing bodies within the University.

At this point it is worth looking at the recognised definition of a conflicts of interest (and why a simple declaration of members interests by the persons involved is not deemed sufficient to manage risks of Conflicts of Interest within a management process, or more widely to the governance of a company or institution).

In simple terms, a Conflict of Interest can occur when personal interests conflict with one’s responsibility to act objectively in the best interests of one’s organization.

It is important to note that a “personal interest” does just mean one’s own interest (a common misconception), but may arise also from one’s involvement with internal entities within the parent organisation [such as an individual with an administrative role also having a role within an academic faculty], or other external organisations that one is involved with, as well as the interests of colleagues (both subordinates & superiors), not to mention family friends, or even, as former Health Secretary Matt Hancock discovered in the PPE row, the landlord of the local pub.

It stands to reason that the larger and more complex an organisation is the greater is the chance that a Conflict of Interest might arise, and thus the greater is the necessity that such potential conflicts are managed in a formal and accountable, way by the organisation’s governing bodies, such as a Board of Directors, or in the case of Sheffield University, by its Executive Board, Council and Senate.

Governance and quality assurance experts consider that there are three types of Conflict of Interest,

It considered important for institutions, companies and organisations to assess and manage each of these areas actively because failure to do so might mean,

If that is the theoretical basis for the avoidance of Conflicts of Interest, the next stage in the analysis is to assess whether such conflicts can be demonstrated in the process of creating and ruling on the Institutional Review of the Archaeology Department at Sheffield University.

Perhaps the clearest way to demonstrate such issues is to create a Venn diagram showing, in graphic form, the intersecting areas of interest within the administration of Sheffield University.

A Venn diagram showing the distribution of individuals within the four main governing bodies of Sheffield University.

Professor Valentine in particular both led the review team and has a seat on the UEB, Senate and Council.

As far as the actual decision making by the Senior Management Team [SMT] and governing bodies at Sheffield University is concerned, from a practical standpoint, the question to be asked is whether, at any time during the generation or discussion of the Institutional Review of the Archaeology Department, any member of the UEB, Senate or Institutional Review Group who might have been, or was, conflicted, including Professor Valentine, queried whether they should:

Our analyst pointed out that these are all simple, non-bureaucratic, steps that would have, at the very least, protected themselves, their colleagues, and the wider organisation of Sheffield University from potential Conflicts of Interest and the resulting reputational damage as the Review progressed.

However, not to have reflected on this issue would represent a failure to fulfil a fundamental duty of care and, if nothing else, flags up a dire lack of self awareness.

“In my opinion, and given the apparent history of decisions pushed through by the University’s management team, the University Executive Board should have at least considered the potential overlap between their personal interests (as defined above) and their duties to the wider organisation. The Venn diagram provided indicates that they are unlikely to have undertaken this process.”

Our analyst concluded that such a failure is,

“Something I would characterise as decidedly non-trivial in a management team that operates at such a high level within the organisation.”

In essence, Conflict of Interest is a recognised issue in management, potentially leading to confirmation bias and poor decision making, or, at worst, the corruption of processes such as management and procurement, or even of individuals.

While there is no evidence that anyone at Sheffield has acted corruptly, campaigners against the closure of the Archaeology Department may well be dismayed, if probably not altogether surprised, that no attempt seems to have been made to ensure that the University Executive Board, Senate and now the University Council, have acted impartially by recognising and mitigating possible Conflicts of Interest of any kind in the Review of the Archaeology Department.

When it comes to the work of the Executive Board, the Sheffield University website shows that such governance issues fall within the remit of the University Secretary, Dr Tony Strike. The website states that,

“Tony works to ensure the highest standards of governance in liaison with the Chair of Council, President and Vice-Chancellor, University Executive Board members and Professional Services Directors.” adding,

Working with the most senior officers of the University, including Sheffield’s Vice Chancellor Professor Koen Lamberts, Dr Strike should have paid proper regard to the standard definitions of Conflict of Interest set out by the the International Organization for Standardization (ISO) and the International Electrotechnical Commission (IEC), which are used in the auditing and certification of management systems by inspecting bodies.

When it comes to impartiality the ISO/IEC standards offer this definition of the term,

Note 1 to entry: Objectivity means that conflicts of interest do not exist or are resolved so as not to adversely influence subsequent activities of the inspection body.

Note 2 to entry: Other terms that are useful in conveying the element of impartiality are: independence, freedom from conflict of interests, freedom from bias, lack of prejudice, neutrality, fairness, open-mindedness, even-handedness, detachment, balance.“

The International Standard has been drawn up with the objective of promoting confidence in bodies performing inspections. As such, a key requirement of the Standard is the need to maintain impartiality, which requires the ongoing assessment of risks to that impartially.

In itself, our analyst said, this is a pretty low-level, routine, even tedious activity. However, crucially, while there is no “trick” to it, because it is a mundane management process, it does require that the organization concerned is open self-reflection and the disclosure of interests.

This means being critically aware of the processes that are being undertaken by the organisation, and ensuring that personnel are deployed appropriately (both to protect their interests and those of the wider organisation).

While the Senior Management team at Sheffield will claim that they are following the University Governance rules as they are required to, those campaigning to save the Archaeology Department at Sheffield might be forgiven a wry smile when they read the terms “freedom from bias”, “lack of prejudice”, “neutrality”, “fairness”, “open-mindedness”, “even-handedness”, “detachment”, and “balance” in the official ISO/IEC definition of impartiality. These are the very issues which the campaign has claimed have been absent in the Institutional Review of the Archaeology Department.

The campaigners might argue also that the self reflection demanded of a well run organisation taking Conflict of Interest seriously, is a concept which appears alien to a senior management team which to opponents of the Review seems intent of railroading thorough a decision to close the Archaeology Department as quickly as possible, and with as little outside scrutiny as possible.

Certainly, our analysis suggests that, at least as far as potential Conflicts of Interest are concerned, the system at Sheffield, either deliberately, or accidently, has too the effect of avoiding also levels of internal scrutiny.

Essentially, unlike the students who claim their academic careers have been jeopardised by the uncertainty around the future of the Archaeology Department, the claim, supported by our analysis, is that the senior management at Sheffield University not only get to mark their own homework, they do not need to worry about an additional marker, let a alone an external moderator, to achieve the result they want.