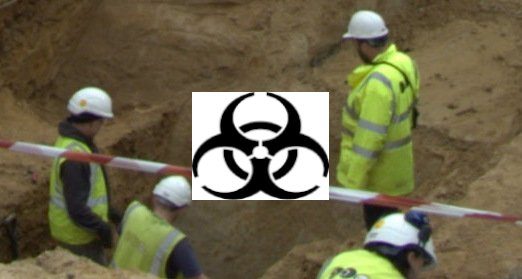 Responding to the growing controversy over the continuation of some developer funded archaeological work, heritage regulator and the Government’s principal statutory adviser on heritage in England, Historic England, has told thePipeLine, that at least for the time being, “for safety’s sake” archaeologists should be stood down from fieldwork, including on construction sites.

Confirming that the organisation was following the Government’s instructions, by closing its offices and withdrawing its own team of archaeologists from fieldwork, a spokesperson for Historic England told thePipeLine this afternoon that, pending further clarification and direction from the Government,

“We will support the Government line on this [Covid-19 distancing on construction sites] as and when it is made clear, but would for now support a position that for safety’s sake, archaeological excavations are stood down.”

The suggestion in the statement that the UK Government’s line on the issue is not clear will ring true to many archaeologists working in developer funded archaeology.

For the last few days, led primarily by the archaeological section of the trade union Prospect, there has been increasing concern that archaeologists, especially those working in London, are being forced to work in circumstances which are unsafe because they do not follow the Government’s instructions for social distancing, both on site and in travelling to and from sites.

The Mayor of London and the First Minister of Scotland have also called for a closure of non-essential construction sites, that is those not engaged in work directly applicable to combating the Coronavirus emergency, such work in hospitals.

However, other units are reported as attempting to continue working and, in a statement released yesterday [24 March 2020], the Federation of Archaeological Managers and Employers [FAME] stated that, while safety was a priority,

“Not all FAME member companies are stopping all site work; where work can continue safely, work is continuing  – and some are working on implementing measures that will allow them to come out of safety shutdown.”

At Prime Minister’s Questions today [Wednesday] Prime Minister Boris Johnson told outgoing Labour Leader Jeremy Corbyn that construction companies must follow NHS guidence on social distancing and have a duty of care to do so.

The duty of care is a statutory responsability under health and safety legislation, whereby an employer has a duty to take all reasonable steps to protect its workforce and the wider public who might be impacted by its actions.

However, a short while later Mr Johnson appeared to soften the Government’s line commenting,

“What we are not doing is closing down the whole UK economy.”

It is this apparent contradiction, echoing the comments of other ministers, including Cabinet Office Minister Michael Gove and Housing Minister Robert Jenrick, which has led to the confusion over whether or not to stand down UK archaeological fieldworkers.

“We agree with Historic England and think every site should shut.

There are good Health and Safety reasons for some work, including backfilling deep trenches, but no more than that. If site managers can ensure that work is safe then work could continue in theory.

However, our earlier Twitter posts and instructions to members show how impossible it is to maintain distancing in site huts and vans, not to mention work on sites where it is often necessary for archaeologists to work close together in tight spaces or in handling equipment and finds.”

“We are advising members and Registered Organisation to include the risks to staff and the public from coronavirus as part of their risk assessments and, where those risks cannot be mitigated (ie where it is not possible to follow government guidance to stay 2m apart, including on transport to and from site) we are advising that work should cease.”

“We recognise that there may be circumstances where this cannot happen immediately, eg where sites need to be closed down safely.“

Dr Lennox observed that the CIfA were aware of a number of cases where the necessary changes to working practices had not been made to bring site work in line with government advice, which with the passing of the emergency Coronavirus Bill, now has the backing of Law.

The organisation, which sets and regulates professional standards for many UK archaeologists, did not rule out that some work could continue for the time being. It had also had feedback from some members stating that they were able to work safely and wished to be able to continue to do so.

However, it is not known if this sample includes CIfA members working freelance who, under current conditions, would lose all income if they ceased to work and might feel severe pressure to continue.

CIfA had concluded also that it seems sensible that much work should stop for the time being while people design new ways of working.

On a more optomistic note, Dr Lennox suggested that once new coronavirus guidence compliant systems are in place and training given, it maybe that some field archaeologists could get back to work.

However, Dr Lennox echoed the Prime Minister’s initial comment at Prime Minister’s Questions, in warning that all accredited CIfA members and Registered Organisations have a duty of care to employees, colleagues and volunteers under Principle 5 of the organisations Code of conduct, adding,

“…we won’t hesitate to take action against members or Registered Organisations found to be in breach.“

FAME, and the Ministry of Housing, Communities, and Local Government have also been approached for comment.