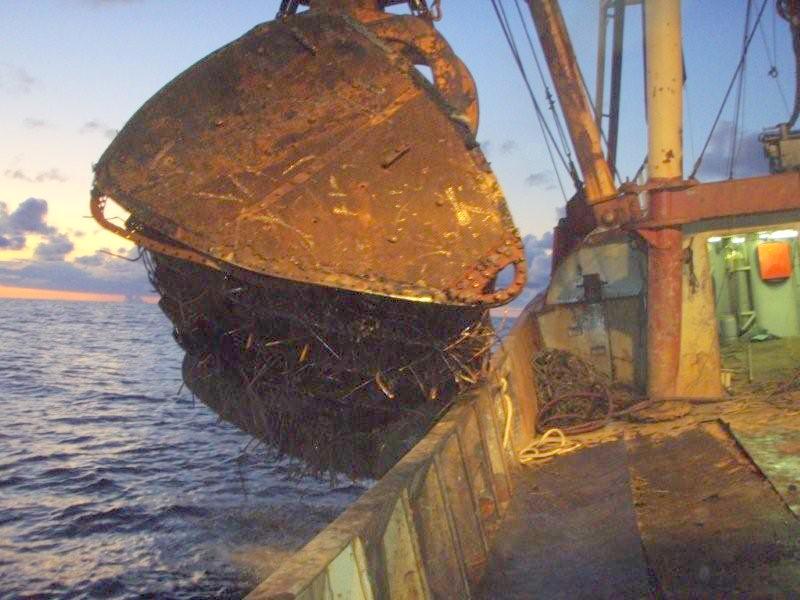 The Illicit salvage of engine room plant from HMS Queen Mary, sunk in 1916, as undertaken here by Dutch company Friendship Offshore, would be forbidden under the 2001 UNESCO Convention which protects underwater cultural heritage more than one hundred years old.

[Image:  Fair Use for the purpose of Reporting via thePipeLine]

There is widespread disappointment in the maritime archaeology community after the UK Department for Digital, Culture, Media and Sport [DCMS] announced yesterday that it is to postpone a promised review into the ratification of the 2001 UNESCO Convention on the Protection of the Underwater Cultural Heritage.  The UNESCO convention protects all underwater cultural heritage more than one hundred years old and states ratifying the convention also undertake to observe certain minimum standards for underwater archaeology.  In the statement announcing the postponement the DCMS stated that it was concentrating on what were described as “more immediate priorities.” However, thePipeLine understands that  officials speaking privately have confirmed that the immediate priorities concerned are primarily issues surrounding Brexit which are known to be consuming increasing resources across Whitehall.

The announcement of the postponement came in a written ministerial statement given to the UK Parliament yesterday [31 October 2017] by Minister of State for Heritage and Tourism John Glen MP.  In the statement Mr Glen told MP’s that, circumstances had changed since the Government had promised a review of the UK’s position on ratification of the 2001 UNESCO Convention on the Protection of the Underwater Cultural Heritage in it’s 2016 Culture White Paper.  Mr Glen’s statement continued,

“As a result, we have decided to defer the review while we focus our efforts and resources on delivering new and more immediate priorities.”

“We remain committed to reviewing the government’s position on ratification of the Convention when priorities and resources permit.”

Hopes had been high that following the UK’s ratification of the Hague Convention on the protection of cultural artifacts in war zones that the DCMS would have the personnel resources to move directly to its review of the ratification of the Underwater Cultural Heritage convention.  Indeed, sources close to the process have told thePipeLine that senior government officials gave no hint a U-turn was on the cards.

However, disappointment at the decision has been mitigated somewhat by the Minister restating to Parliament in writing that the UK has,

“…adopted the principles set out in the annex to the Convention as best practice in the management of underwater cultural heritage.”

The Minister added that there is no change to this policy.

Such a statement to Parliament is regarded as strengthening the position that all underwater  projects which would be covered by the convention over which any department of the UK Government has any form of control, must observe the Rules of the UNESCO Annex.  This includes the salvage of commercial cargoes, such as the silver alleged to be on board SS Mantola and other vessels lost during World War One, where the Government paid out on War Risk Insurance, or otherwise retained ownership of cargoes.

The alleged failure of the submitted project design to comply explicitly with all the principles set out in the annex to the 2001 UNESCO Convention has also provided the reason for the Government and the Marine Management Organisation to resist attempts by the Maritime Heritage Foundation to allow its contractor, Odyssey Marine Exploration, to salvage the wreck site of HMS Victory 1744.

Nonetheless the postponement of the DCMS review is still seen as a missed opportunity.  Speaking to thePipeLine Mr Robert Yorke, who chairs the cross sector expert group of stakeholders, the “Joint Nautical Archaeology Policy Committee”, stated,

“The Government promised this review in 2014 and again in its 2016 Culture White Paper, so we are extremely disappointed that it has been postponed.”

Mr Yorke went on to state that the UK needs to ratify the Convention in order to protect all wrecks over 100 years old of UK merchant vessels and Royal Navy warships (including the remains and possessions of their crews) throughout the world.  Mr Yorke told us,

“The Government needs to realise that ratifying the 2001 UNESCO Convention is the only way to protect historic shipwrecks more than one hundred years old, such as the Royal Navy ships lost at the Battle of Jutland and other First World War actions in the North Sea.  We know illicit salvage has taken place and we need a cluster of countries around the North Sea to ratify the Convention, including Great Britain, in order to enforce their protection.”