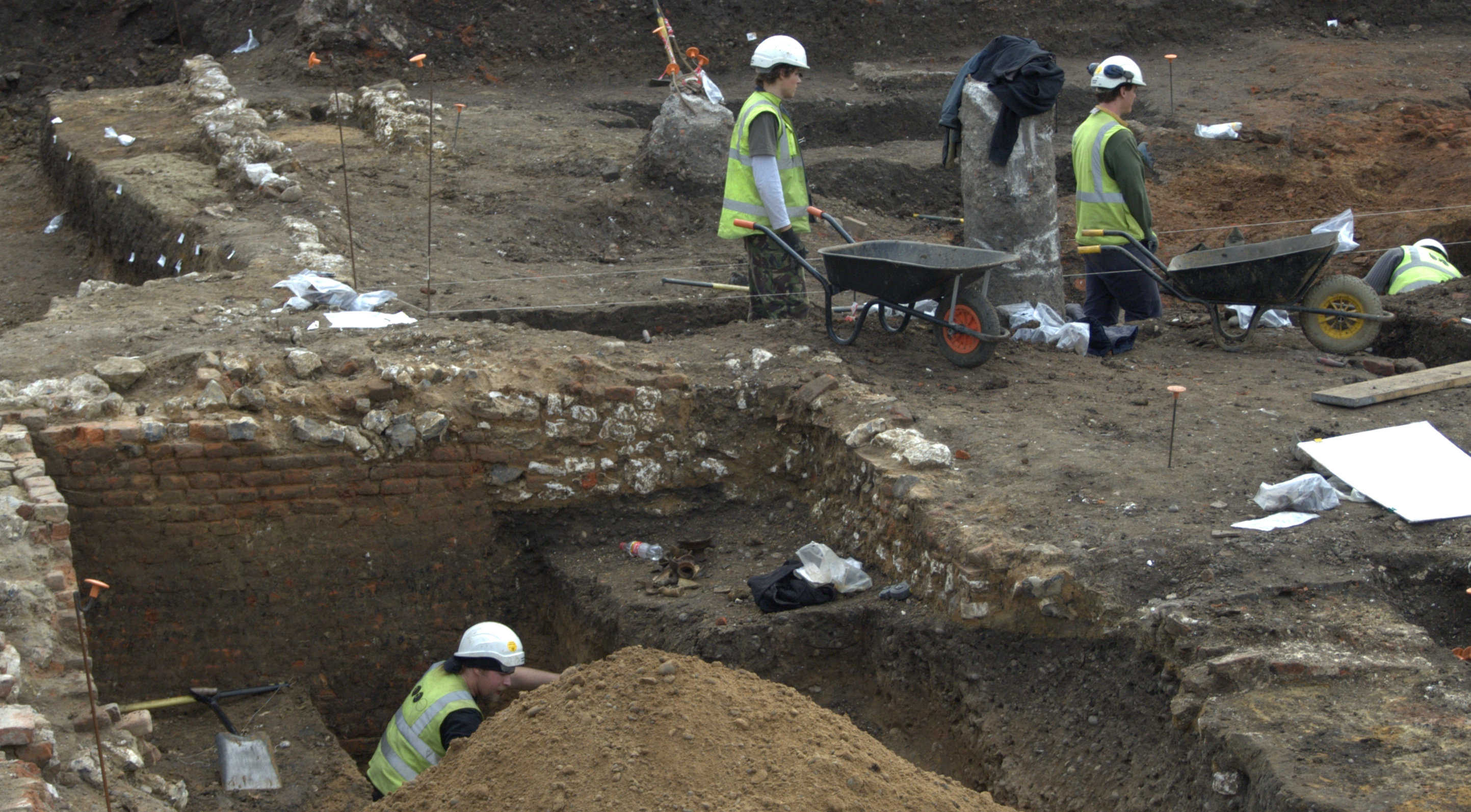 There are growing fears that the two core principles, underpinning all developer funded commercial archaeology in the UK are threatened by a clause in the Government’s EU withdrawal bill.  The bill is designed to import EU Law into the UK legal system, if the UK withdraws from the European Union, as the Government has announced it will, at the end of March 2019.  The controversial clause removes the right to make a legal challenge based on non-compliance with EU law and treaties.  Most importantly, these include the so called “precautionary principle” and the principle that the “polluter pays”.  The removal of the two principles would be popular with the Ministers, MP’s and construction industry lobby groups, who see Brexit as an opportunity for the further the deregulation and weakening of environmental and planning rules.  Faced with this, there are additional concerns that, while groups campaigning for the natural environment are active in attempting to ensure that there is no diminution of environmental protection based on these principles post Brexit, the actions of similar groups in the heritage sector are too low key and possibly too late.

As drafted currently, the EU withdrawal bill would not allow any legal challenge based on the failure of the Government, or any other party, to obey the principles embodied in EU Law and treaties.  Among other safeguards, these hold that the natural and historic environment have no owner and are held as a public good, therefore, anyone seeking to change that environment, for example by building a road, must demonstrate that no harm will be done [the precautionary Principle], or, if the environment is to be damaged by the development, that the damage is proportionate and that it can be mitigated in a manner paid for by the developer [the polluter pays principle].  Both principles lie at the heart of current planning rules with developers required to commission and pay for Environmental Impact Assessments [EIA’s] and fulfill planning conditions, such as funding the excavation and preservation by record of archaeology discovered on a development site.

Such “developer funded” work, is the bread and butter of commercial archaeological units which employ directly around 4000 people across the UK, to whom can be added specialised heritage advisers and consultants, as well as an already dwindling number of specialist officers in local government.  All these jobs would be under threat if the twin principles are not adopted by Parliament to underpin UK Law and guidance and to ensure continuity with current practice.

The threat to these principles, which date back thirty years to Policy Planning Guidance 16 [PPG 16] and which are enshrined in the current National Planning Policy Framework, lies in clause 3 of Schedule 1 of the EU withdrawal bill, which states,

(1) There is no right of action in domestic law on or after exit day based on a
failure to comply with any of the general principles of EU law.

(2) No court or tribunal or other public authority may, on or after exit day—
(a) disapply or quash any enactment or other rule of law, or
(b) quash any conduct or otherwise decide that it is unlawful,
because it is incompatible with any of the general principles of EU law.

In plain language, the clause removes the right of any group or individual to challenge any Government or local government decision on the grounds that it is not compatible with , for example, the EU Birds or Environment directives, or the Lisbon Treaty, which enshrine the two principles as the basis of best practice across the EU.

Summing up the threat to the natural and historic environment of the UK Tom Burke, of think tank E3G which specialises in issues relating to climate change, told the Guardian:

“It would not be an exaggeration to say that Brexit will have more immediate impact on our ability to manage the growing stresses on the environment than any other single political development of the past 50 years.”

Mr Burke expanded on this fear, telling the newspaper that,

“There is no formal place in British policy practise for the writing into legislation of principles such as the polluter pays or the precautionary principle. This weakens the guidance to policy makers and judges as to the tests that should be applied in policy formation or implementation.”

Fears have been expressed by environmentalists, among others, that a number of prominent pro Brexit individuals and organisations, including Cabinet member Dr Liam Fox, see the Brexit process as an opportunity to water down regulation impacting on free trade and the private sector.  This includes any regulations based on the two core principles.  Shortly before the EU Referendum in 2016, another leading Brexit supporter, former Environment Secretary Owen Paterson told the UK 2020 Think Tank ,

“Another change, of enormous significance, was the requirement from 1999 that environment policy was to be based on the ‘Precautionary Principle’. This marked a fundamental break with Britain’s historic ‘reactive’ policy, based on the idea that something was legal until the state said otherwise – and would have a huge impact on British farming and innovation.”

Adding to the concern are the comments of Sir Mark Boleat, the Chairman of the Housing and Finance Institute, who wrote in a recent paper that part of the problem of a “broken planning system” in London, and by extension elsewhere in the UK, was an inbuilt bias against development.  This bias includes, in his view, time consuming and expensive demands on developers.  Sir Mark, who is also the former policy chairman of the City of London Corporation, concludes that part of the solution to this was to ensure local authority planning committees undertook,

“…a rigorous assessment of whether [archaeological conditions on a planning application] conditions are appropriate and necessary (as opposed to nice to have).”

In a sign that the Government’s omission of the twin principles from the EU withdrawal bill has not gone unnoticed in Parliament, the Co-Leader of the Green Party Sarah Lucas MP, along with Labour MPs Kerry McCarthy and Mary Creagh, who is also chair of the House of Commons  environmental audit committee, have tabled an amendment to the bill which would have the effect of requiring all public authorities, including the Government, to have regard for the core principles enshrined in EU Law.

However, for now at least, it is the impact of the possible watering down of the two principles on protection for the natural environment which has attracted most serious concern.  In contrast, the possible impact on the heritage sector has received very little attention in public.

thePipeLine approached both the Council for British Archaeology [CBA] and the Chartered Institute for Archaeologists [CIfA] and asked them to respond to the failure of the Government to write explicitly the transfer of EU environmental protections into the EU withdrawal bill.  We also asked what steps the two bodies were taking to ensure that the principle that an evidence based  precautionary approach is taken to policy and practical planning decisions where the polluter pays for mitigation,  which underpin commercial archaeology in the UK, remain at the center of policy and planning decisions.

A spokesperson for the CBA told us,

“The CBA has not yet taken legal advice on this issue, but we are working with partners in both the historic and natural environment sectors to urgently clarify the potential impact on commercial archaeology and the UK’s historic environment if the EU withdrawal bill is not amended to ensure that the precautionary principle and polluter pays principle are not transferred directly into UK Law, by either separate Act of Parliament, or the exact mirroring of EU law and the Lisbon Treaty.”

“We are also discussing this issue with members of the All Party Parliamentary Archaeology Group who can raise the matter in Parliament at Westminster, as appropriate, as well as talking to colleagues in Scotland, Wales and Northern Ireland.

We believe that it is crucial to ensure that the precautionary principle and polluter pays principle continue to underpin all decision making relating to the historic environment in the UK post Brexit to continue to deliver appropriate public benefit.”

The Chartered Institute for Archaeologists has not yet responded to our request for comment.

Meanwhile, faced with an apparent deadlock in the Brexit negotiations in Brussels, a consortium of UK business groups, including the Confederation of British Industry, the British Chambers of Commerce, the manufacturing trade body EEF, the Institute of Directors and the Federation of Small Businesses, came together to make headlines by sending a letter demanding that the Government’s Chief Brexit negotiator, David Davis, provide clarity by the end of this year [2017] regarding a two year transition period post Brexit, or risk, in their words,

“…wide-reaching and damaging consequences for investment and trade, as firms review their investment plans and business strategies.”

With the construction sector reported to be “flirting with another recession“, and with complex and controversial projects such as the Stonehenge Tunnel already engaged in a planning process which will stretch far beyond the projected date of Brexit, and which could be thrown into chaos by the rules changing half way through, it remains to be seen if the commercial sector in archaeology, their regulators and their representative bodies, will make a similarly powerful public demand for clarity.  Particularly clarity regarding the continuity of the two principles underpinning the legal requirement for and the commercial viability of, their own sector?

With the Government’s statutory adviser on heritage matters Historic England hobbled by its direct relationship with the Government and with English Heritage now concerned primarily with the commercial viability of its portfolio of historic sites, some will doubt that the remaining sector voices, principally the National Trust, the Federation of Archaeological Managers and Employers [FAME], [which represents the commercial units such as Museum of London Archaeology [MOLA], Wessex Archaeology and Oxford Archaeology], along with the Association of Local Government Archaeology Officers [ALGAO], both of which service the current planning system, and the organisations such as the CIfA and the CBA who represent the interests of the people the commercial units employ, [not to mention the tens of thousands more who care about the UK Historic Environment] can come together with the will to campaign as a single voice and with enough force, to be noticed against the sound and fury generated by the wider battle to shape Brexit.

Given the heritage world’s track record in recent campaigns against decisions which impact negatively on the sector, most recently the loss of Archaeology A-Level and the Government ignoring the concerns of UNESCO and many independent experts regarding the A303 upgrade and Stonehenge tunnel, the fear will be that the archaeological sector has once again arrived too late at a political knife fight, friendless and armed only with a blunt trowel.

Up to the time of publication neither the DCLG, nor the DCMS has responded.