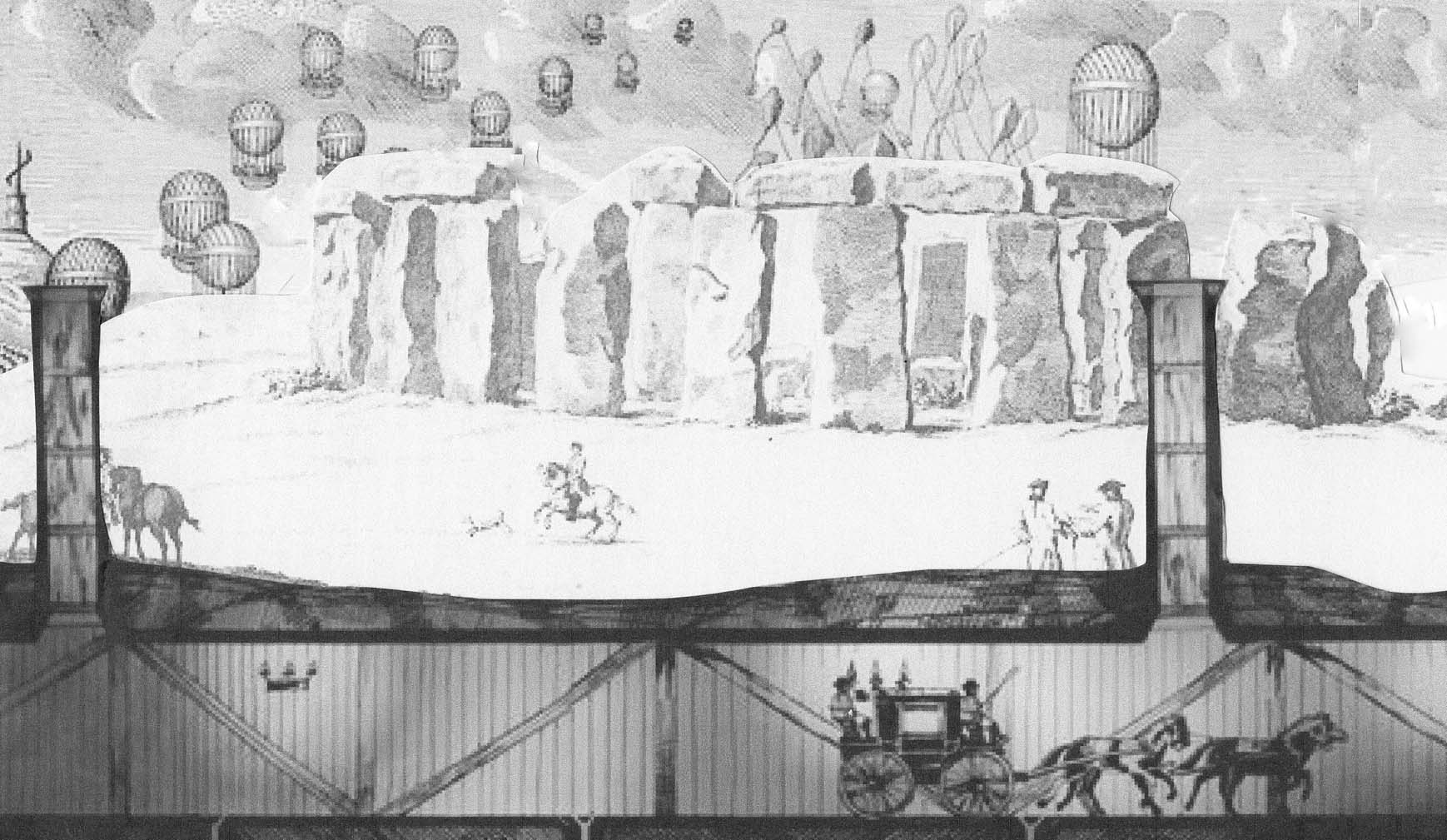 In a move which has been coordinated across Government and leading heritage agencies and charities, the Government’s road transport body, Highways England, has announced its preferred route for the proposed tunnel and upgrading of the A303 on the Stonehenge World Heritage Landscape in Wiltshire.  However the proposal is likely to prove highly controversial because, although a 2.9 km [1.8 miles] tunnel will remove traffic from the immediate landscape around the iconic monument, and adjusts the location of the tunnel’s western portal which was criticised heavily by independent archaeologists and agencies including Historic England, the proposal still includes  dual carriageway approaches and two tunnel portals within the designated UNESCO World Heritage Site landscape.  A factor which the UN body has warned could put the status of Stonehenge and Avebury as World Heritage Sites of Outstanding Universal Value at risk.

“Highways England is committed to delivering a high quality, modern road on this vital route between the South West and the rest of the country.

“The A303 and the World Heritage site has suffered from congestion for many years. This scheme will enhance, protect and restore tranquillity to one of the UK’s most iconic landscapes.”

“We have listened to feedback from consultation and believe this preferred route will help improve traffic flow, reduce rat running on the surrounding roads, bringing improvements to local communities and benefits to the South West economy.”

The route of the proposed A303 upgrade at Stonehenge

Meanwhile, in a joint statement the principal landowners within the Stonehenge landscape, the National Trust, and English Heritage, along with the Government’s statutory adviser Historic England, also welcomed the proposals, stating,

“The Stonehenge World Heritage Site is internationally-important not just for Stonehenge itself but for the unique and rich concentrations of burial mounds and monuments in the landscape. Brimming with nature, the open chalk grassland is also home to rare and endangered species of wildlife.”

“This is a once-in-a-generation opportunity to reunite this ancient landscape which is currently severed by a huge volume of road traffic.”

The statement from the three organisations also takes note of the changes to the initial short tunnel proposal which had been criticized heavily by independent archaeologists and campaigners commenting that,

“We welcome the amended route and believe it can, if designed and located with the utmost care, deliver a lasting legacy for the World Heritage Site and restore peace and tranquillity to the Stonehenge landscape.

“The route announced today will ensure the winter solstice alignment will be unspoilt by lights and traffic from the road. We also want to see the globally important archaeology protected, the settings of the ancient burial sites respected and the views between those sites restored.

However, it appears that support for the proposal, is not unconditional.  The joint statement also notes that,

“It is now critical to ensure that the benefits of this new route can be realised through careful design and mitigation of archaeological risks, particularly at the western portal of the tunnel and the approach road.”

The statement from the three organisations concluded,

“We remain committed to working with all those with an interest in the World Heritage Site to protect it and help people to better enjoy and explore this iconic place. We believe that this road scheme, including a bored tunnel of at least 2.9km (1.8 miles) can achieve that aim by opening up and re-uniting the historic landscape.”

However, this commitment to working with those with an interest in the WHS is not likely to satisfy campaigners opposing the so-called short tunnel proposal whatever form it takes.  Particularly as Highways England, the National Trust, English Heritage and Historic England have all chosen to ignore the concerns and advice of United Nations cultural body UNESCO.

In particular, while this proposal does make adjustments to the position of one of the tunnel portals, UNESCO’s principal concern was actually with the dual carriageway approaches.  A report to UNESCO published in March 2017 noted [our italics],

“Both portals would have visual impact, but the extent of new roads beyond, within the property, is of greater concern. The potential impact of some 2.2km of four lane approach roads in cuttings on the Stonehenge landscape could fundamentally compromise the OUV [Outstanding Universal Value] of the property.”

While a resolution adopted by UNESCO World Heritage Committee as recently as July 2017 stated that, in addition to the concerns about the approach roads the organisation also felt that other potential solutions had not been properly explored and that as a result UNESCO,

“Urges the State Party [Great Britain]  to explore further options with a view to avoiding impacts on the OUV of the property, including:

However, these concerns are completely absent from the Government’s media effort.  Placing another regulatory duck in the public relations row Secretary of State for Culture Karen Bradley has also issued a statement commenting that,

“Stonehenge has captured the imagination of people around the world for centuries and is a site of global importance. With over 1 million visitors a year it is one of the jewels in the UK’s crown and it is important that we preserve it for generations to come. This investment from the government will help make the visitor experience much more enjoyable and this is good news for local residents and businesses who will benefit from the new route.

“The government will also continue to work closely with key heritage bodies to ensure this scheme respects and protects the Stonehenge World Heritage site.”

However, once the initial flurry of publicity has died away it is likely that it will become clear relatively quickly that the Government and Highways England cannot have both the tunnel as proposed and claim to be respecting the UNESCO World Heritage Landscape.  A factor which is perhaps acknowledged implicitly in the fact that, while Highways England are happy to produce bucolic images of a Stonehenge sans forty foot articulated lorries and end to end bank holiday traffic, there are no images of the tunnel portals or of contentious dual carriageway approaches crossing the World Heritage Site in today’s press release.  Neither are there images of the site at night showing the impact of the necessary road and portal lighting on the landscape.

Commenting as news of the announcement was breaking a spokesperson for the campaign group the Stonehenge Alliance, which opposes the short tunnel, told thePipeLine,

“Our Government, having asked for UNESCO’s specialist advice on the way forward for the A303 at Stonehenge, has decided not to take it.  Should the road scheme go ahead, the consequences for the archaeological landscape at Stonehenge are deeply shocking: not only would there be serious damage to archaeology and setting but also the strong possibility of the loss of Stonehenge and Avebury’s World Heritage Status.”

“It is a sad reflection on us as a nation  that we would damage the surroundings of one of the world’s most famous symbols of the cultural heritage of mankind.”

The first big test of the new scheme will come as members of the National Trust vote on a motion before the Trust’s Annual General Meeting in October.

The motion, which has been put forward by National Trust members including the historian Tom Holland, would commit the Trust to protecting the UNESCO World Heritage Site as a totality and opposing today’s proposal.

The latest announcement also comes in the week that the House of Lords is due to debate a motion regretting changes made to the way claimants pay for judicial reviews in cases where it is held that Government bodies have taken inappropriate or unlawful decisions regarding the environment.   It is thought likely that the Stonehenge case will end up either in the Courts or as the subject of a public inquiry at some point.

In the end, in spite of Transport Secretary Chris Greyling tieing the Government’s colours to the scheme as a good news story, saying,

“This government is taking the big decisions for Britain’s future and this major investment in the South West will provide a huge boost for the region.

The scheme will also support 120,000 extra jobs and 100,000 new homes across the region, helping us build a country that works for everyone.”

, there is also a school of thought that the entire issue is academic and the announcement today may turn out to be merely a face saving placeholder.

This is because, like the many other proposals to remove the A303 from the World Heritage Landscape which have been mooted during the last three decades, the latest £1.6 billion proposal could fall by the wayside all too easily if it becomes mired in cost overruns, legal difficulties and protests, not to mention possible changes in transport policy in the face of climate change, developing air quality regulations, changing governments and government priorities and even autonomous vehicles.

In this scenario the tunnel is an eye catching, but outdated,  20th century solution crow barred into a twenty first century transport environment and in the end the status quo will be maintained.

At least until the next suggested solution to the Stonehenge conundrum comes along.