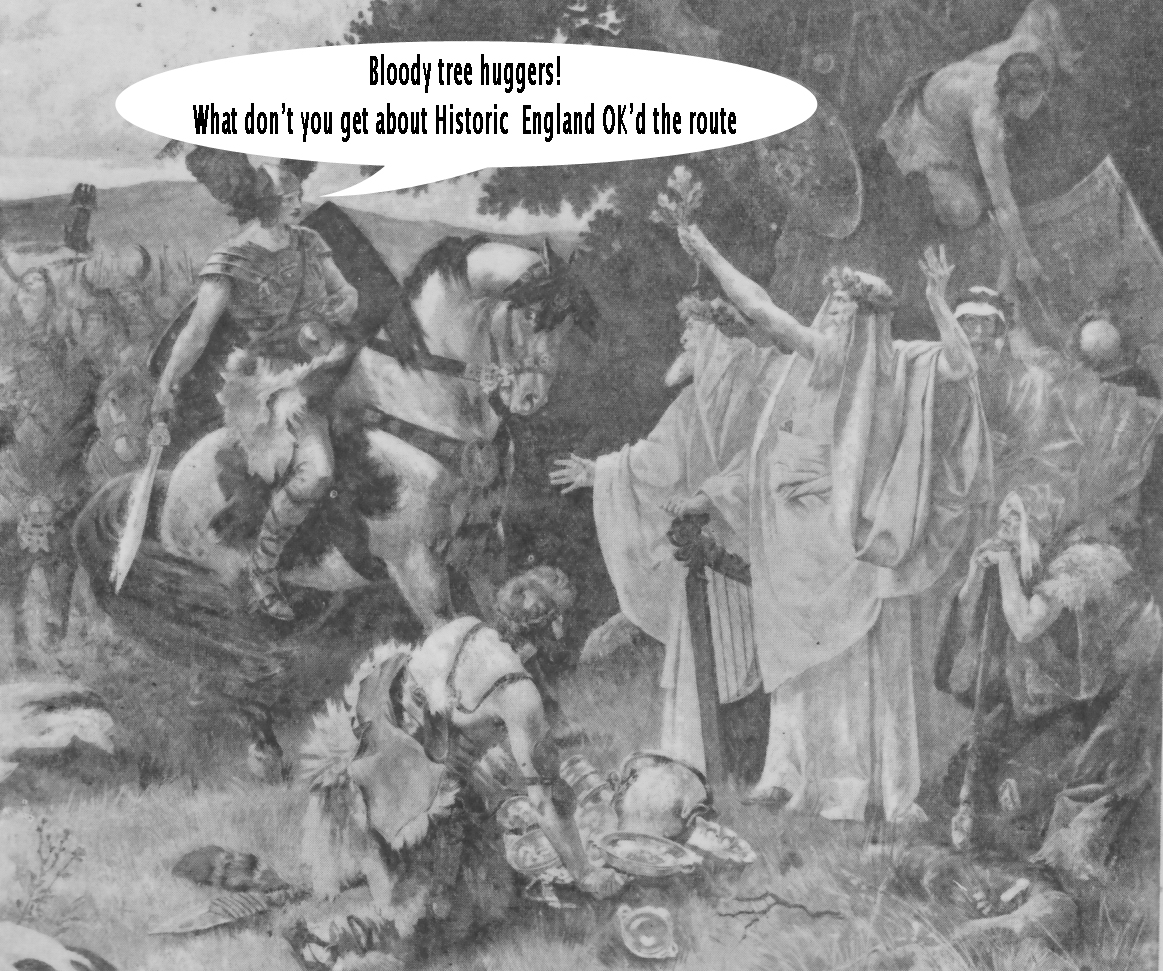 As the midsummer solstice dawns UNESCO, the body which  oversees the designation and conservation of the Stonehenge and Avebury World Heritage Site on behalf of the United Nations, has further ramped up its critical oversight of the proposed tunnel which the UK Government plans will take the A303 beneath the Stonehenge landscape.  A draft resolution to be debated by the World Heritage Committee of UNESCO has criticised the Government’s planning and consultation over the proposed tunnel while the draft also suggests that, in the opinion of the respected world body other options should have been consulted upon and that the World Heritage Site status of Stonehenge could be under threat if UNESCO’s concerns are not addressed.   These latest criticisms of the proposals derive from a new report into impact of the proposed tunnel on the Stonehenge World Heritage landscape undertaken by a joint UNESCO/ICOMOS  [International Council on Monuments and Sites} Advisory mission in February 2017, and they are also unlikely to be welcomed by the recently reelected Member of Parliament for Salisbury,  John Glen.  Mr Glen became Under Secretary of State at the Department for Culture, Media and Sport with responsibility for heritage, including Stonehenge,  in the post General Election reshuffle last week.  A statement issued by Mr Glen earlier this year [2017], suggests that while he is aware of problem of excessive traffic using the A303, and that he welcomes the support for a tunnel in the heritage community, he specifically cited support for the so called long bore tunnel which was not on the table during the Highways England consultation.  To add to the pressure on ministers and Highways England, the draft resolution  requests the Government to respond to UNESCO’s criticisms of the plan by February next year [2018].

The latest UNESCO/ICOMOS Advisory mission to Stonehenge which led to the resolution was tasked to investigate the latest proposals by Highways England to build a 2.9km twin bore tunnel underneath part of the World Heritage Site.  The tunnel forms part of a £1.4 billion scheme to upgrade the A303 in north Wiltshire and the mission came as the tunnel proposal was put out to public consultation during the first months of 2017 by Highways England.

In its analysis of the report,  published on 2 June 2017 for its World Heritage Committee, the UNESCO secretariat offered this critical assessment of the Stonehenge tunnel project,

In using such blunt language the analysis confirms view of many independent archaeologists, including the twenty one signatories of an open submission to the consultation criticising the plan, that the greatest flaws in the tunnel plan relate primarily to the positioning of the approach roads and tunnel entrances, with their attendant infrastructure including lighting.

The report states explicitly that,

“The 2.9km tunnel options presented in the public consultation would cause adverse impact on the OUV  [Outstanding Universal Value] of the property from their approach roads and associated portals.”

The UNESCO analysis adds this justification of the view taken by the reporting team,

“Both portals would have visual impact, but the extent of new roads beyond, within the property, is of greater concern. The potential impact of some 2.2km of four lane approach roads in cuttings on the Stonehenge landscape could fundamentally compromise the OUV of the property.”

It is the use of the term “fundamentally compromise”  in relation to the critical Outstanding Universal Value of the Stonehenge landscape which will ring alarm bells in the wider heritage community and in Whitehall.  The form of words suggests that if the UK Government does not take action to mitigate the criticism it may well find the continuing World Heritage Site status of Stonehenge has been placed under threat.  A situation currently faced by another World Heritage site in England, the waterfront at Liverpool.  A consequence which would be acutely embarrassing to the Government and national heritage bodies at best, and which at worst could also impact on the economic return the Stonehenge landscape offers in terms  of tourism spend.  A matter which would be critical to English Heritage in particular as that organisation relies on Stonehenge for a substantial part of its income as it seeks to put into practice the Government’s instruction to become financially independent of Government support.

However, the Department for Transport and quite possibly the Treasury and the Cabinet Office, will fear also delays and increased costs hitting a significant infrastructure project, the upgrading of the A303 trunk route to the west of England, at a time when the minority Theresa May Government is under pressure to deliver anything at all of substance.

As if that was not bad enough for the Government stance, the criticism offered by UNESCO is not confined just to the current short tunnel proposal.  The draft resolution to be considered by the World Heritage Committee also adopts further very strong language, at least in diplomatic terms, regarding the omission of other options from the Highways England consultation.  The draft resolution,

“Urges the State Party to explore further options with a view to avoiding impacts on the OUV of the property, including:

This view presents another problem for the Government and particularly for John Glen MP, the Parliamentary Under Secretary of State for Arts, Heritage and Tourism at the Department for Culture Media and Sport, who has Stonehenge within his constituency.

In a statement published on his website dated 12 January 2017 Mr Glen stated,

“A great deal of analysis of various options has been done to reach this point, and the tunnel remains firmly supported by both English Heritage and the National Trust. The Council for British Archaeologists have also said that ‘a long bored tunnel is the best means of achieving environmental gain while reconciling a majority of all demands and needs’. “

This stance is clearly at odds with the UNESCO report and resolution which strongly suggest that the analysis done “to reach this point” is not adequate.  More pertinently, Mr Glen also fudges the issue of the tunnel, referring positively to both the broad support for a tunnel on the part of the named heritage bodies which is accurate, but he also cites specifically to the Council for British Archaeology’s support for the so called long tunnel option which was not placed on the table by Highway’s England, but which UNESCO says should have been consulted upon.

Meanwhile, the draft resolution from UNESCO is also a potential embarrassment for the National Trust, English Heritage and Historic England in their own right.  Up until now all three English heritage bodies which have a stake in the Stonehenge landscape, as either landowner or as regulator, have adopted a broadly supportive stance regarding the short tunnel option and have declined to criticise overtly the narrow nature of the 2017 consultation.  A stance which some outside commentators saw as an attempt to rubber stamp the Highways England plan in order to avoid provoking a confrontation with the Government. However, in contrast to the English heritage bodies, UNESCO has not been afraid to demonstrate that it has significant reservations about the narrow nature of the consultation mounted by Highways England, with the draft resolution asking specifically that the two other major options for the Stonehenge landscape, a surface bypass or a long tunnel avoiding the World Heritage Site should also be included.  This would require the consultation to be reopened, potentially delaying the A303 project still further.

However, the draft UNESCO resolution does provide the three heritage bodies with both the top cover of an independent international body and ammunition to send in the direction of ministers, should they choose to use it,  regarding the aspects of the project which have drawn most criticism from expert prehistorians and other independent archaeologists and heritage professionals.  A joint statement by the three bodies issued in February [2017] accepted the tunnel option and welcomed the position of the eastern tunnel portal as a being a significant improvement on earlier proposals, while suggesting that other aspects of the tunnel, including the contentious western portal, required “significant improvement”.  A view which is given added weight by the wording of the UNESCO resolution.

As all parties digest the implications of the UNESCO resolution and the report which inspired it, the draft submitted to the United Nations body does not give them much time to reach a position.  The resolution concludes with the request that the UK Government submits an updated report on the state of the Stonehenge World Heritage Site and the implementation of the UNESCO recommendations by 1 February 2018.

The UNESCO World Heritage Committee meets in Krakow, Poland on 2-12 July 2017 and it remains to be seen if the resolution is adopted without amendments.