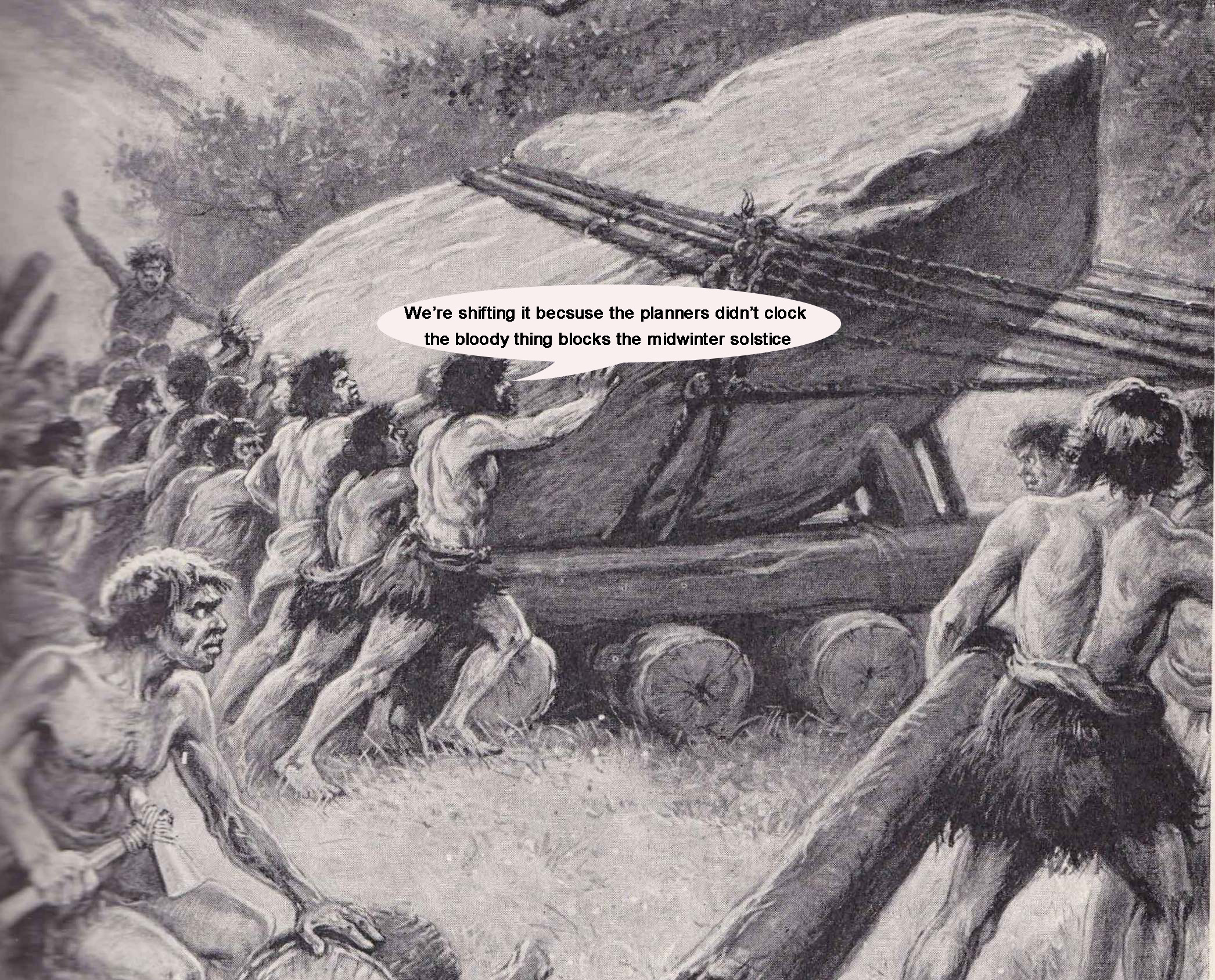 The publication of an outspoken  submission to the current consultation regarding the proposed tunnel at Stonehenge, authored by twenty one leading UK experts in the archaeology of the Stonehenge World Heritage Site [WHS] landscape, represents a major dilemma for the three principal bodies involved in the conservation of the iconic site, Historic England, English Heritage and the National Trust.  The experts, who style themselves  “a collective expert group”, not only state that the current consultation document launched by Highways England for a public consultation which ends on 5 March [2017] has been “based on  inadequate and obsolete information”.  The group also contend that the so called short tunnel option, currently favoured by Highways England and the British Government, is misconceived and that if the A303 is to be developed and re-routed, the option avoiding the WHS by diverting the road to the south has to be preferred.  It is this stance which could have serious consequences for the National Trust, Historic England and English Heritage.  Shortly after the consultation was launched in January the three organisations issued a holding press statement taking the position that, while the initiative was to be welcomed in broad terms, the Highways England scheme could be significantly improved in the area of the proposed western tunnel portal in particular.  However, if the Government ultimately opts for the short tunnel as proposed, and with it the inevitable damage to the WHS, such a powerful rejection of the whole tunnel scheme could end up with the three principal organisations in UK archaeology and heritage, including the Government’s statutory adviser, Historic England, either acting in direct opposition to Government policy by opposing the controversial proposal, or of supporting the proposal and facing inevitably the opposition of a roll call of leading national and international experts, at the head of a powerful independent lobby opposing the scheme, not to mention what is likely to be a vociferous public campaign led by organisations such as the Stonehenge Alliance.

The criticism offered by the “expert group”, which includes Professor Mike Parker Pearson of  University College London, Prof Peter Rowley-Conway of the University of Durham and Dr David Field, formerly of English Heritage, details a series of archaeological issues which can be used to question the scheme on heritage grounds.  For example it is pointed out that there are almost certainly sensitive archaeological sites along the floor of the valley of the river Avon which, the group argues, have not been properly considered in the current proposal.  The expert group also address the issues of the setting of Stonehenge and the other known prehistoric monuments of Salisbury Plain, and the potential for intrusive light pollution as well as the intrusion of the new road and western tunnel portal onto the sight lines from Stonehenge towards the Midwinter Solstice.   This is the time of the year which is now seen as key to understanding the importance of the monument in pre-history.  The group state that the construction and road alignment of the western portal in the form currently envisaged would be a “calamity”.  Finally, the group also express incredulity that the so called short tunnel option is preferred at all when the suggested southern diversion of the A303, the so called option F010 which was not even put to consultation, would be both less damaging and cheaper.

However, the group’s criticism of the consultation document is not limited to the physical impact of the specific engineering proposals for the tunnel and dual carriage ways, and the potential for damage to sensitive and irreplaceable archaeology and landscape settings.  In a key paragraph the group appears to undermine the entire academic credibility of the consultation document itself.  The the group allege that,

“Until now there has been no effective consultation with us, the wider community of archaeologists studying the Stonehenge landscape.”

This perceived lack of wider consultation is critical the perception of the Government’s consultation process because, as the group state,

“All of this knowledge is material which is crucial if the Highways England proposals are to have justified merit. The document we are responding to has evident weakness, as it is clearly based on inadequate and obsolete information.”

However, the criticism goes further with a subtext hinting that the Government and Highways England may not even have wanted to factor into the development of the preferred short tunnel option the most up to date and sensitive archaeological findings.  The submission suggests that, while the most effective route for feeding the most up to date archaeological data into the planning process is via the Heritage Monitoring and Advisory Group (HMAG) and Arup Atkins, the joint venture consulting engineers who are designing the project,

“Neither has thus far consulted the leading experts.”

Such a criticism is potentially significant as it could form the basis for a legal challenge to any decision on the grounds that due process has not been followed.

Those seeking to defend the proposal from Highways England might attempt to argue that the criticism of the expert group is overstated, even alarmist, as the proposal is not yet fully worked through and has yet to go through a full design and planning process.  Some critics of the group’s stance could even be prepared to dismiss the submission as “sour grapes” on the part of a group of snowflake academics who are piqued because they were not consulted by Highways England or Arup Atkins.  However, the impression created by any defence of the short tunnel proposal in those terms could be fatal for any attempt by the Government and Highways England to seize the moral initiative over the upgrade of the A303.  Such a combative approach would almost certainly alienate and provoke a large portion of the wider archaeological community into a defence of both the respected individuals making up the expert group, and the monuments and WHS itself.  In any case, some of the criticism the group offers is on purely objective, practical grounds.

In this vein the group point out that any archaeological work carried out as a planning condition on a road scheme which impacts on the World Heritage Site would of necessity be both time-consuming and very expensive.  It is pointed out that were the current proposal to be given the green light by the Government ” the proposed scheme would require the largest archaeological excavation ever undertaken within the WHS.”

In a final opinion which appears to be shading towards the suggestion, increasingly widely discussed, at least in archaeological circles,  that to do nothing for now with the A303 at Stonehenge would be better than to proceed with the current proposal, the expert group point up a series of developments in and around the monument which have been regretted subsequently, and conclude that,

“It follows that planning at Stonehenge must be cautious and always propose minimal intervention.”

This comment is justified by the suggestion that “There is no area in the WHS where we can say, ‘We know that it is safe to place a tunnel portal or major new surface road here because there is nothing there which is important now or will be seen as important in the future.’

While the release of the letter has clearly been timed for maximum impact at the start of the final week of the public consultation which ends on 5 March, that does not detract from the power of the arguments the submission contains, and ultimately the intervention by the new Stonehenge expert group has underlined that, whatever happens next in the long running saga of the A303, the decision which will be made by Highways England and the Transport Secretary is going to be both controversial and inevitably highly political.

Should the current proposal be given the go ahead, and bearing in mind the likelihood that any dispute around the treatment of the Stonehenge World Heritage Site would attract international headlines at a time when the Government agenda is also likely to be dominated increasingly by the Brexit negotiations and issues around how far EU Environmental protections will be absorbed into UK Law,  Transport Secretary Chris Greyling and the Theresa May Government, must decide if they are willing to take the time, and pay the political price, of facing down the opposition of what seems to be a highly vocal and increasingly media savvy opposition who can style themselves easily as the defenders of one of the World’s most iconic heritage sites.   However, this is not just an issue for Government.  English Heritage which operates the Stonehenge visitor center as one of its most important cash cows, the National Trust, and Historic England also face the unenviable choice as to how to respond to the current short tunnel proposal.

The situation is probably most simple for the recently devolved English Heritage charitable trust.  Shorn of any regulatory role, or of any real role in archaeological research, and tasked by Government with being financially independent by 2022, the charity’s main concern is likely to be to maintain, and ideally increase, visitor numbers at the Stonehenge visitor center, while not rocking the funding boat, although it could face pressure from its membership and volunteers who by definition are interested in the conservation of heritage sites.

For the National Trust, the charity which owns much of the Stonehenge WHS landscape, the issue is largely one of whether even qualified support for the short tunnel proposal could lead it into a confrontation with its archaeological and conservation staff, and perhaps even more importantly, with many of its sixty thousand volunteers and four million members.

However, it is for Historic England that the dilemma posed by the intervention of the expert group is perhaps the most acute.  Former Chancellor of the Exchequer George Osborne changed Historic England’s mission from that of being primarily a conservation body and the Government’s arms length technical and legal advisor as guardian of England’s heritage, to one of supporting explicitly what the Government defines in the National Planning Policy Framework as “sustainable development”.  If the Government is determined eventually to force through the short tunnel option on the basis that it represents such a sustainable solution to a national infrastructure issue, the archaeologists at Historic England could find themselves forced to defend, support, and even promote, a solution which the rest of the archaeological and heritage world views as utterly unacceptable, possibly because the senior management of the body might fear being further sidelined and starved of resources by a vengeful Whitehall and Downing Street.

The consequences of that eventuality for confidence of the wider archaeological community in the only body tasked by law to interact directly with the Government on English heritage matters is incalculable, but potentially highly damaging.

The Highways England public consultation into the proposed dual carriageway tunnel on the A303 at Stonehenge closes on 5 March.