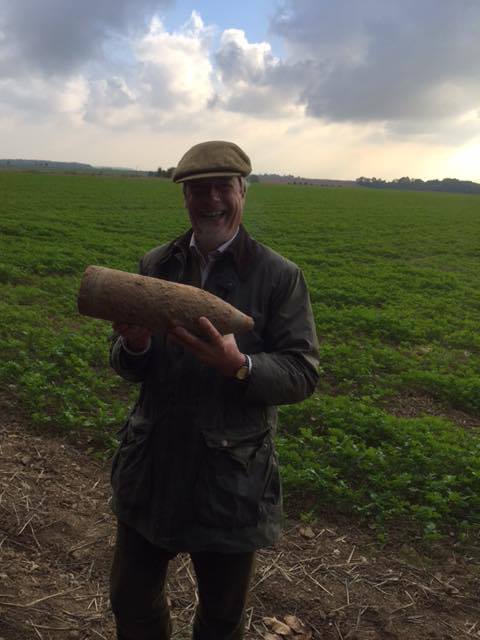 [Image:  via Facebook, Fair use for the purpose of reporting]

Last week the political world looked on incredulously as two senior Members of the European Parliament belonging to the right of center United Kingdom Independence Party [UKIP], exchanged blows during a fractious meeting of the parties MEP’s at the European Parliament in Strasburg, leaving one of them, Steven Woolfe, hospitalised.  Now acting UKIP Leader Nigel Farage seems to be attempting to go one better by risking his life, and that of the person taking the photograph, by being pictured on his verified  Facebook page apparently handling an unexploded high explosive shell, purportedly from the iconic World War One Battlefield of the Somme in northern France.

An expert in historic ammunition told thePipeLine that the shell, which Mr Farage is shown cradling in a post on his Facebook page added today [12 October 2016], appears to be a high explosive round from a 4.5 inch howitzer, which contains over four pounds of high explosive Amatol or TNT.

The largest type of field artillery used by the British Army during World War One, the purpose of the 4.5 Howitzer was defined in 1917 as,

“…neutralising guns with gas shell, for bombarding weaker defences, enfilading communications trenches, for barrage work, especially at night, and for wire cutting in such places which the field guns could not reach.”

It is estimated that over twenty five million rounds were fired by these weapons during the course of World War One and the failure rate could be as high as  30%, forming an unwanted legacy which is still lethal a century on from the carnage of the Western Front.  In the first six months of 2016 alone the French authorities in Amiens disposed of 25 tons of unexploded munitions from the Somme region.

Referring to Mr Farage’s handling of such a potentially lethal item of Somme memorabilia, our expert added,

“I’m glad it didn’t go off as it would be tragic if one of the greatest politicians of our time, who so successfully delivered BREXIT was no longer around.”

Indeed, had the shell functioned Mr Farage, and anyone else in his immediate vicinity, would have been spread across the local area, and UKIP would have been left looking for its third Leader in a week.

Mr Farage’s game of Russian Roulette with century old explosives comes as concerns are rising in the archaeological community at the casual handling of military explosives on television programmes such as Nazi War Diggers [aka World War Two Battlefield Recovery] and the growing popularity of collecting dug up battlefield militaria.  Only last month St Albans based metal detectorist and militaria collector Alan Tissington narrowly avoided a custodial sentence when he was convicted of three charges of possessing items of historic ammunition without a licence, and a further three charges of possessing banned ammunition.  Other charges were left on file.

The risk from handling historic ammunition is far from theoretical.  In July 2016, at the time of the centenary commemoration of the Battle of the Somme, Michel Colling, the head of the EOD team in Amiens which covers the Somme battlefield, told the Telegraph,

“We have accidents quite frequently. The rotor blades from tractors can set them off, though the farmers are generally protected as they are inside the vehicle and above ground.

There are accidents with collectors who want to empty munitions either for their collections or to sell them.”

Indeed, in February this year [2016] fifty four year old collector Yannick Le Poder, of Fontenoy, near Soissons, was killed when an item in his militaria collection exploded.  Press reports suggest Monsieur Le Poder lost three limbs in the explosion, one of which ended up in a neighbour’s garden.

Aside from its potentially lethal nature, if the shell was recently dug up it might also be the case that Mr Farage was handling it in breach of the French Code of Cultural Patrimonie.  The Somme battlefield is a protected site and excavations are banned unless a written project design has been submitted and approved.

Of course, it may be that the shell is a part of the so called “Iron Harvest” of  tons of World War One munitions which are recovered every year as the accidental by-product of ploughing and other legitimate activities and left out for collection by the French Army Explosive Ordnance Disposal units.  In which case Mr Farage may have fallen foul of the French laws over the unauthorised possession and handling of explosives.  Conviction for such offences could lead to imprisonment for up to five years and a fine of 75k Euro.

Mr Farage and UKIP have been contacted for comment.