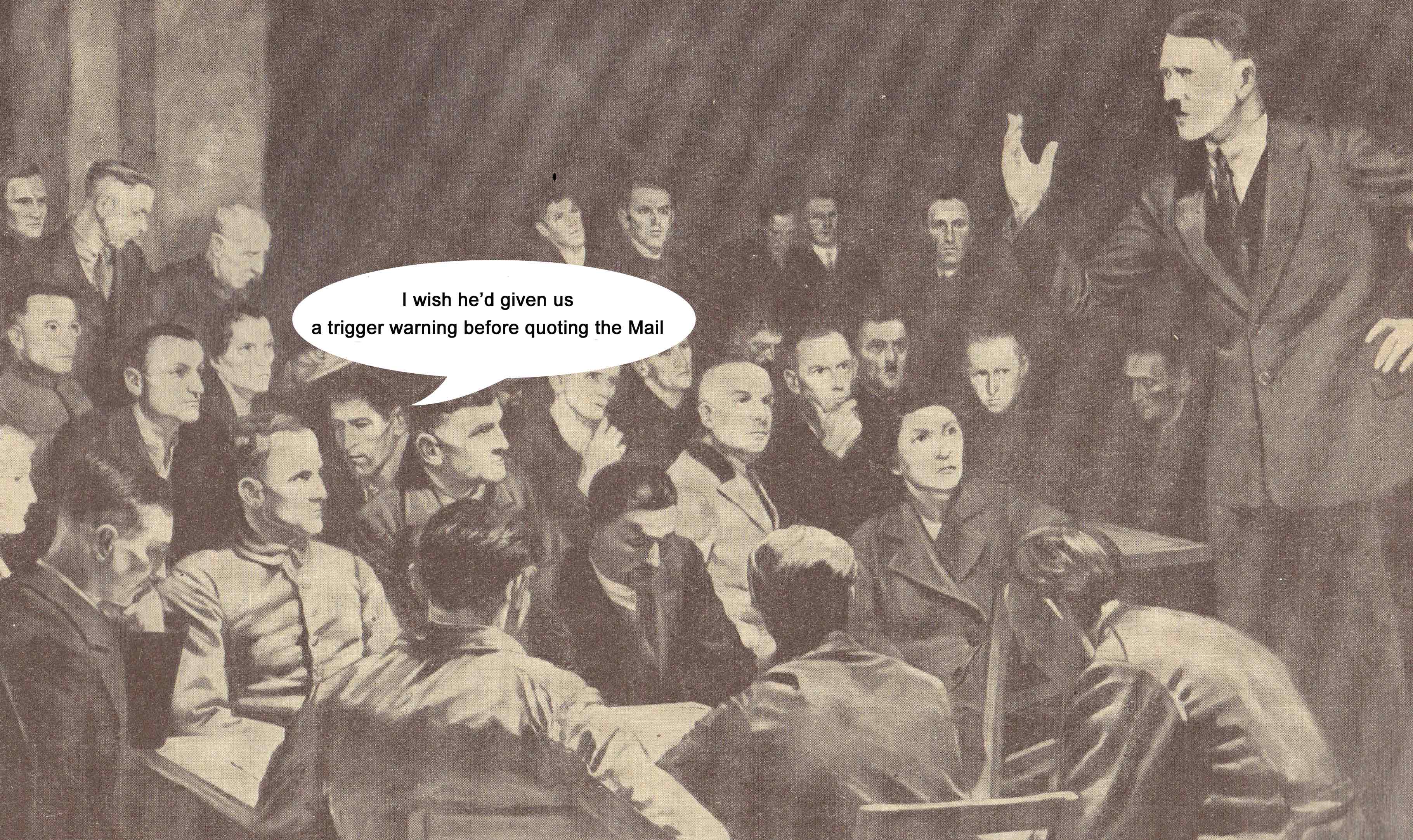 Archaeologists have been up in arms on social media since the Mail published a story on 25 September 2016, accusing the highly regarded conflict archaeology course at the University College London, Institute of Archaeology of issuing, so called, “trigger warnings” to students, before discussing material concerning human remains and war crimes, including mass graves, which might be upsetting.   To right of center commentators such warnings are regarded as a politically correct restraint on academic freedom and it was predictable that the story was subsequently picked up by the Spectator magazine blog and the Times, where the same accusations were repeated.  However, as well as the offence caused by an apparently ad hominem attack on the academic integrity of the respected leader of the course Dr Gabriel Moshenska, there are also concerns in the archaeological community that in apparently adopting a public relations strategy of ignoring the accusations in the hope the story will go away, University College London has allowed the integrity of its course, and above all the integrity of its staff, to be traduced by what most archaeologists regard as an ill-informed, politically motivated, manufactured event.

The Mail’s headline suggested that the practice of issuing a warning about elements of the content of UCL’s conflict archaeology course,

The article, which was bylined Jonathan Petrie, then proceeded to quote Chris McGovern, a former history teacher and chairman of the pressure group, the Campaign For Real Education [CRE], who told the Mail,

‘This is, in a sense, health and safety going mad again. We are back to an overprotective nanny state.

‘If you sign up for a course on the archaeology of battlefields or the poems of Ovid, you should know what you are going to get.’

“Yes, students  whose entire academic mission is to dig up bones, pore over old stuff and work out what the hell mankind was doing / thinking a thousand-odd years ago are being warned that such excavations can uncover ‘disturbing’ stuff that might ‘traumatise’ them because ‘bones can be scary’… Archaeology students being told archaeology is a scary pursuit — I think we’ve reached peak campus madness.”

In an exercise in mutual back slapping, or whatever it is naughty right wing school boys do in each others company, Delingpole then quoted O’Neill’s article in the Spectator, before concluding,

“Really, though, if you’re an archaeology student specialising in 20th and 21st century conflicts and you can’t handle the psychological trauma caused by studying what happened in battles wouldn’t the most sensible thing to do be to change course: kitten studies, maybe; aromatherapy; dolphin watching; whale song composition; advanced nurturing and caringness – something like that, maybe?”

Mr Delingpole, who is the UK Executive editor of Breitbart, and was allegedly a source for “Call Me Dave”, the infamous biography of former Prime Minister David Cameron by Lord Ashcroft and Isabel Oakeshott which generated “pigs head gate”, is a regular writer for the Telegraph, the Spectator and, you’ve guessed it the Mail.  You might sense something of a pattern developing here.

Faced with this mendacious nonsense, experts in Conflict and Forensic Archaeology were quick to point out that, far from allowing students to duck out of classes as the uncontextualised and unsourced report in the Mail alleged, the issuing of appropriate warnings was necessary pastoral care on a course where graphic material relating to issues such as contemporary war crimes is shown and discussed routinely.  A fact, the critics say, which also seems to have passed Mr Petrie, Mr O’Neill and Mr Delingpole by in their haste to show off the enormous size of their anti-PC credentials, and score a cheap political point.

It has also been observed that the passages quoted in the Mail article are not given any context.  thePipeLine can reveal that the contentious lines actually comes from the course handbook for the Archaeologies of Modern Conflict course.  The full passage reads [our italics];

At times during this course we will be discussing historical events that may be disturbing, even traumatizing, to some students. If you ever feel the need to step outside during one of these discussions, either for a short time or for the rest of the class, you may always do so without penalty. If you do leave the room for a significant time, please make arrangements to get notes from another student or see me individually.

If you ever wish to discuss your personal reactions to this material, either with the class or with me afterwards, I welcome such discussion as an appropriate part of the course.”

In other words, far from representing an excuse to withdraw from elements of the course, the alleged warning carrys the explicit expectation that any student who does choose to remove themselves form the class obtains full notes on the material they missed, and also offers anyone with concerns about their reaction to the course content the opportunity to use that experience as part of their response to the course.

Subject experts also point out that such a warning is a necessary exercise of a duty of care on the part of the University and the Lecturer, in part because students taking part in such courses can include those with a direct cultural relationship with victims, or actual experience of war zones, as civilians, as aid workers, or as members of armed forces, all of whom might be vulnerable to Post Traumatic Stress Disorder [PTSD] on account of that experience.

It is also the case that the importance of understanding the potentially traumatic nature of the evidence practitioners might encounter is built into professional protocols for investigating the war crimes discussed as part of the UCL course.  For example “The International Protocol on the Documentation and Investigation of Sexual Violence in Conflict” stresses the importance of investigators adopting the concept of  “Do No Harm”, including doing no harm to themselves, while the  Handbook on Assisting in International Criminal Investigations, published jointly by the Swedish Defence College, and the Folke Bernadotte Academy in 2011 states [our italics],

“If you begin to interview witnesses without extensive training, there is a substantial risk that you can create renewed trauma for victims, inflict trauma on yourself, permanently ruin the possibility for investigators to speak to these witnesses and also have a detrimental effect on the reliability and admissibility of any potential evidence. “

Aside from the, at best, ignorance and, at worst, deliberate misrepresentation, of the content of parts of the UCL archaeology of conflict course, questions have also been raised regarding just why the “Campaign for Real Education” was asked to comment on the allegations contained in their story by the Mail in the first place.

Founded by the late Nick Seaton, the Campaign for Real Education is regarded as a broadly right wing pressure group, which describes itself this way on its website,

“The Campaign for Real Education was formed in 1987 to press for higher standards and more parental choice in state education. It is not affiliated to any political party and is funded entirely by voluntary donations.”

However, to many in the educational establishment, Nick Seaton was a controversial and divisive character, holding what to some were dogmatic views and  leading an organisation which was seemingly determined to return schools to what critics would term an imagined halcyon period of Grammar Schools for the budding academic elite and Secondary Modern Schools for the other 80% of children.

It is also pointed out that if you look at the website of the Campaign for Real Education there is actually very little material relating to teaching in the University sector.  The concern of the CRE is principally with education up to age 18, seen through the prism of a binary view of an education sector divided between Traditionalists [Good] and Progressives [Bad].

That said, there is a particular emphasis on History as a subject area in the front line of this particular culture war, as the CRE website admits,

Seen in that context, and given that the original source for the alleged concerns raised in the story is not given, the Mail’s article can be seen as simply the vehicle for the views of the Campaign for Real Education, and as an excuse for the other distinguished denizens of the right of center commentariat, O’Neill and Delingpole, to gleefully pile in.

thePipeLine asked Mr McGovern if he was made aware of the context of the warning to students in the Conflict Archaeology module handbook, and if seen in that context the warning indicated that the University was simply discharging its duty of care towards its students.  Mr McGovern told us,

“I was made aware of the context of the ‘trigger warning’ and would question your claim that the university is discharging its duty of care. Students following the course should be in a position to access all of it. Allowing on to the course students who may be traumatised by part of its content could be placing them at risk. In my view all parts of the course should be accessible to all of students all of the time and, at university level, this should not involve any constraint on knowledge.
I have no doubt that the university is well-intentioned, but I consider ‘trigger warnings’, in general, to be a threat to subject knowledge and to academic freedom.”

Faced with what amounts to a calculated media mugging of its course, and a long serving and respected member of its staff, thePipeLine also approached the media office at University College London by e-mail on a number of occasions over the past two weeks and asked them to comment on the allegations carried in the Mail, and on Mr McGovern’s comments.  However, in spite of our being told that the request would be referred to the appropriate member of staff no comment has been forthcoming.  Other University based academics have not been afraid to comment however. Writing in a blog post another distinguished conflict archaeologist, Professor Tony Pollard of the Glasgow University, observed wryly,

“Do these same journalists get so agitated when a film on TV is preceded by a simple warning that it contains scenes of a sexual nature and graphic violence? I suspect not.”

Of course, there is a crucial difference between, for example, “Game of Thrones” and the courses tought by Professor Pollard and Dr Moshenska.  When viewers of the latest episode of carnage on Westeros are greeted with an Ofcom compliant “trigger warning” from the broadcaster, the scenes of a graphic violence were simulated, and everyone involved stood up and went home after the wrap.  The men, women and children in the mass graves of Spain, Guatamala, Sebrenica and Kosovo did not.

Universities teach the archaeology of conflict in part to ensure that the mute voices of the murdered can still be raised and their fingers can be pointed at the guilty.  It is a calling which most professionals in the field would argue is far too important to be used to score a few cheap and poorly aimed political points, and one which academic institutions like University College London have a duty to be seen to defend.

To its critics, this makes the silence of University College London regarding the so called “trigger warnings” row and the agenda driven storymakers who created it, all the more inexplicable and regrettable.

As is pointed out, the electorate in the United States is discovering at the moment that if you do not stand up to bullies and expose them for what they are, the risk is they get elected.  Worse they might maneuver themselves into positions of influence, in spite of their being completely unaccountable, pandering to a post truth, anti-intellectual zeitgeist, by revelling in an affectation of contrariness and wilful ignorance.  Just like the Mail, Mr Petrie, Mr O’Neill and Mr Delingpole in fact.