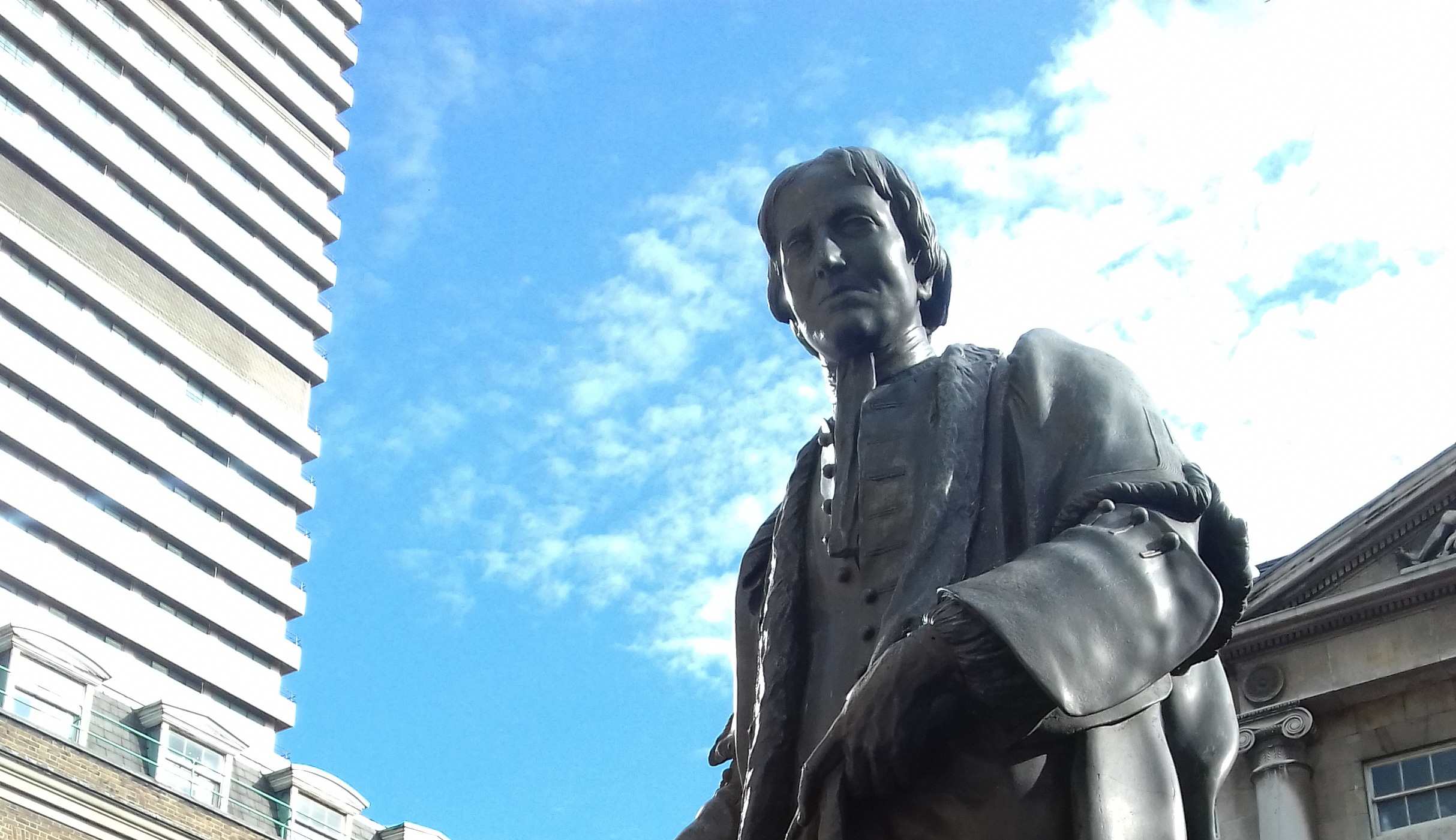 thePipeLine can reveal that in a report to Southwark Planning Officers in 1723, the Inspector for Hiftoric England said while “…the massing of ye buildings, ye uncompromising modernift design and ye use of use of imported materials, such as brick and stone which are not in common use in the local vernacular building style, did cause harm to ye historic Southwark slums and stews conservation area, the benefits of hospital facilities for ye poor did outweigh that harm.”

Sir Thomas Guy was a noted miser and rogue employer, paying his staff what were acknowledged to be low wages, even by the standards of the early 18th century.  However, his version of Free Market Capitalism made Sir Thomas a fortune as a book seller and stock market speculator, who profited from at least one company engaged in the Slave Trade.  As a result, whether out of conscience, or from genuine philanthropic idealism, this enabled him to fund the building of the Hospital on the south Bank of the Thames in Southwark, which adopted his name.  Guy’s Hospital opened in 1725 and support for its ongoing costs was ensured through an endowment from Sir Thomas of the then handsome sum of £219,499.

Fast forward to 2016 and Guy’s Hospital is now part of the Guys and St Thomas’s NHS Foundation Trust, and is world famous as a teaching hospital and centre for medical research.  However, the ownership and operation of the site is more complex with King’s College, Faculty of Life Science and Medicine and the Dental Institute, also operating at Guy’s.  Indeed, King’s is opening a flagship new Science Gallery in 2017.  The gallery, which is designed to promote creative thinking by bringing the public into contact with scientific research and the arts, will be the focus of a public space which will also include a cafe and access to the original Georgian quadrangle.  As part of the new development the public will also have access to one of the hospital’s longest standing residents.  The quadrangle has at its centre the statue of Sir Thomas Guy himself, who has kept a statuesque eye on the site since 1734, and is protected from the perils of the twenty first century, as he has been from the pranks of generations of medical students, by a barrier of robust iron railings.

Of course, street furniture and public art, including statues, are quite rightly included in modern planning decisions, such as that granting planning permission for the Science Gallery.  In particular it is recognised that such items can add greatly to a sense of place, but only if they are well designed, built from high quality materials, and placed appropriately.   However, as in many aspects of architecture and design context is all and the context of the Georgian buildings of Guy’s has changed radically since the hospital was built and is set to change even more radically, as the developments around the Shard continue.

In July 2015 architect Peter Foulsham RIBA attended the public exhibition on the proposed Science Gallery London, at the Guy’s site.  Mr Foulsham noted in the questionnaire which allowed the public to respond to the proposal that in his opinion it would be acceptable to relocate the statue of Sir Thomas Guy in order to  to make the quadrangle a more suitable as an intermittent external venue.

Subsequently Mr Foulsham become aware of the proposed Shard Phase 3; a 26 story, slab sided block of flats which are to be built opposite the Guy’s Quad on the North side of St Thomas Street, just 75 meters away from the statue of Sir Thomas Guy.

As a result of that discovery he proposed that the statue should be relocated to liberate Thomas Guy from being dominated and oppressed by the very high wall of the proposed block of flats [and his existing heavy metal railings], allowing anyone standing at the foot of the statue and looking up to see Sir Thomas set against the background of the sky, rather than a wall of glass.

It was suggested that the pedestrian area South East of the original Guy’s building was the best location for the statue: a move of 100 meters along the main axis to a location opposite Shepherd’s House, which is between two mature trees. Guy’s statue would face North East towards an 18th century extension to his original 1725 building, which lies 25 meters away.

It was also recommended that the statue should also be raised by 1.5 meters by increasing the height of the plinth.  An effect which could be easily achieved by placing a plain plinth below the existing plinth. This suggestion was made in order to give Sir Thomas both more physical presence and to liberate him from his protective railings.

Such a relocation of a historically important statue is not unusual. The Guy statue itself was moved from its original 1734 position to its current position in 1739, while perhaps the most striking example of statue being relocated is the iconic equestrian statue of the Emperor Marcus Aurelius, which was first set up in Rome in 175 AD, the subsequent existence of which has been positively peripatetic.  The statue has been relocated to numerous sites through its history, before finding its current position in the Palazzo dei Conservatori of the Musei Capitolini.  The statue on view in the open air of the Piazza del Campidoglio, on the Capitoline Hill, is a replica.

More unusually, alongside architectural plan and section setting out the proposed move, the attached poem by Richard Darbourne was also submitted in support of the scheme.  In the course of the poem the author imagines Sir Thomas Guy’s attitude to his current situation and voices his plea to be taken to a more friendly environment.  The poem is published here for the first time by permission of the author.

Ten generations past we sat and schemed
The use of land south side of Thomas Street
To serve the lunatic, incurable, and needy poor…

Now centring on my classic quadrangle
The planners come again to survey change,
And mark with aerosol-blue hieroglyphs
That which might release me from my purgatory:
Car­parked, confined, my railings manacled
With grimy, limp link­-chains padlocked
To sputtering scooters and motor bikes.

No need to keep me, fixed like tradition,
Where once I withstood blasts from Hitler’s bombs.
Let me retreat and rest my bronze­-eyed gaze
From blocks and steepling shards of glinting glass.
Make that public space and Gallery for Science.
Turn me south and through the Colonnade
Stand me, newly clean, where first I stood
To see the cattle grazing Great Maze Pond
And white­-bleached hides tenterhooked on Snowsfield.
I would be near reforming John Fry,
Wittgenstein’s secret serving intellect
And surgeon assistant Keats’ stone alcove.
Let me marvel at my hospital towers
And clanking din of promised cancer wards.

Regard me in my furling livery gown
And coat of arms that teach enduring good:
Azured charity, pious fleurs de lis,
Silver sincerity and crowns of reward ­
And grant that all at Guy’s and King’s might
Give and receive in wisdom and holiness.

However, in spite of this channeling of the spirit of Sir Thomas Guy, the suggestion to move the statue has, for the time being at least, fallen on deaf ears.

A spokesperson for Guys Hospital e-mailed Mr Foulsham to explain:

“We engaged in an extensive consultation process in the run up to our planning application for Science Gallery and, as you note, we raised the possibility of moving Sir Thomas to increase the range of public uses to which his courtyard could be put. In the end we concluded that moving the statue did not strike the right balance between conservation and utility…”

Sir Thomas Guy has not so far commented the decision made by the management of his famous hospital and remains imprisoned behind his railings.

Following the pulling down of the statue of English slaver Sir Edward Colston  in Bristol and the decision by Oriel College in Oxford to seek permission to remove the statue of Cecil Rhodes from the facade of its Grade 2 listed building, as part of the worldwide Black Lives Matter movement to address historical and current racism, the Guys and St Thomas’s NHS Foundation Trust announced that the statue of Sir Thomas Guy was to be removed from its public position.

In a statement the Trust said,

Like many organisations in Britain, we know that we have a duty to address the legacy of colonialism, racism and slavery in our work. We absolutely recognise the public hurt and anger that is generated by the symbolism of public statues of historical figures associated with the slave trade in some way.

We have therefore decided to remove statues of Robert Clayton and Thomas Guy from public view, and we look forward to engaging with and receiving guidance from the Mayor of London’s Commission on each.

The ultimate fate of the statue is not yet known.