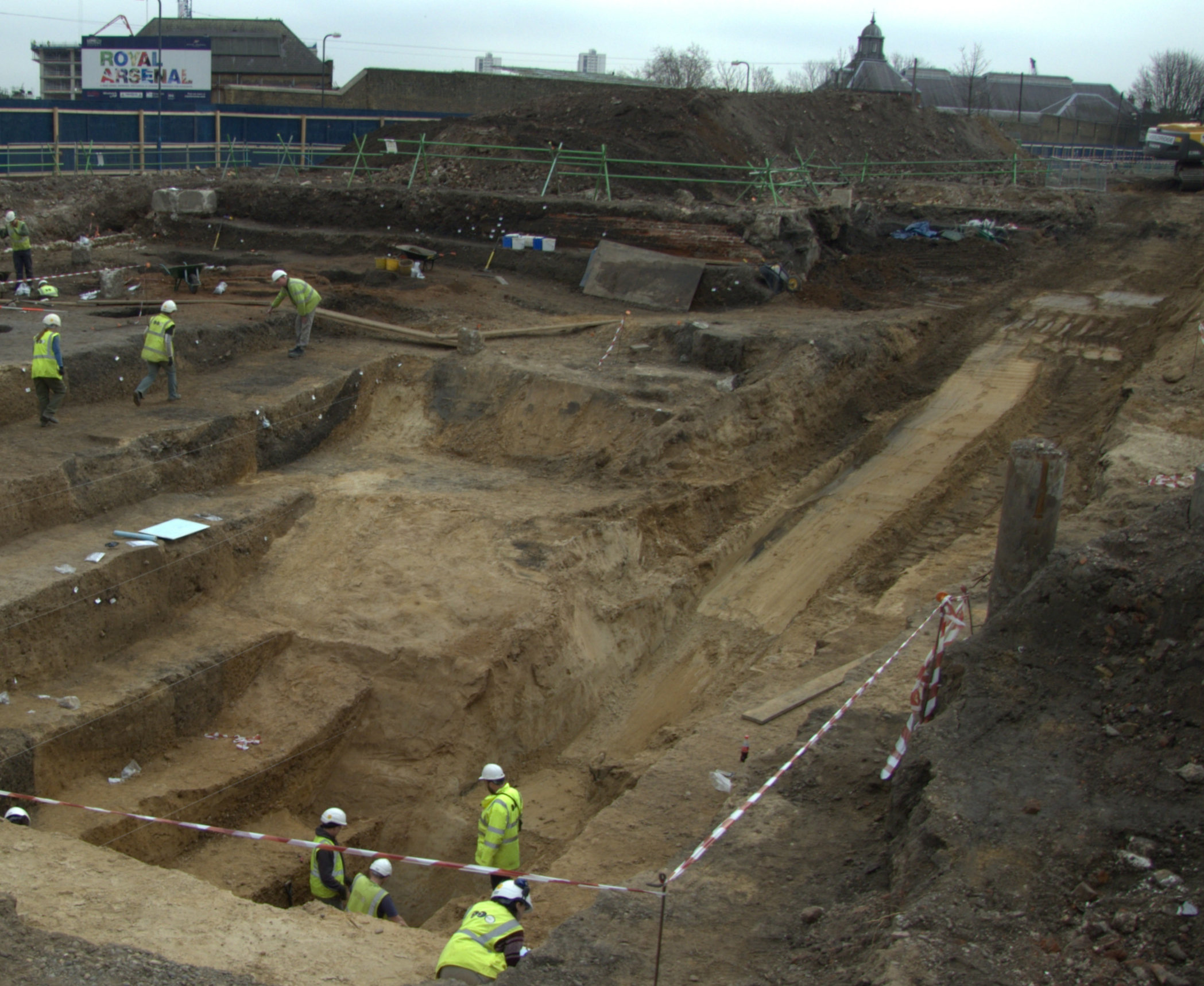 You only have to look at the “Latest Employment” listings in the British Archaeological Jobs Resource to see how important the planning process under the requirements of the National Planning Policy Framework [NPPF] is to Field Archaeology.  The very title “Planning Archaeologist” in some job advertisements gives the game away.  Indeed, the 2012-2013 Landmark archaeological jobs survey reported that 5,940 people then worked directly in archaeology, with some 81% of those posts depended largely on the supply of field investigation and historic environment advice.  However, in a move which looks like a slap in the face for heritage and conservation bodies such as the Council for British Archaeology [CBA] and the Chartered Institute for Archaeologists [CiFA], the Government’s Department for Communities and Local Government [DCLG] has announced the piloting of Brownfield Registers which would grant planning permission “in principle”, for sites defined as “brownfield”, that is previously developed, in seventy three councils as across England.  Many archaeologists and conservation bodies fear that the move could have profound , negative implications for archaeology and conservation in that it appears to undermine the principle that every proposed development should carry out a historic environment impact study before any form of planning permission is granted and that Councils should have the authority under the National Planning Policy Framework [NPPF] to refuse planning permission on environmental and conservation grounds.

Critics also argue that the DCLG moving to a pilot programme before the publication of the results of a consultation which only closed on 22 February and which received 1100 responses, looks very like an attempt to pre-empt the result of the consultation and head off any attempt to block, or circumscribe the move to Brownfield Registers.  This suspicion is enhanced because the “pilot” areas include some of the largest and most environmentally and historically sensitive areas in England, including two areas at the heart of the Industrial Revolution; Liverpool, Manchester, and Newcastle-Upon-Tyne which just happens to be the eastern terminus of Hadrian’s Wall as well as the historic towns and cities of Colchester, Oxford and Peterborough.

“A key part of our ambition to build 1 million homes is to get work started on brownfield sites across the country – many of which are currently nothing more than blight on a community’s landscape.

These councils will be at the forefront of these efforts to list land and encourage builders to deliver new homes for aspiring homeowners.”

Of course when he mentioned listing land, Mr Clark was not referring to having land listed under any of the criteria for conservation.

Mr Clark’s colleague, Housing Minister Brandon Lewis was also explicit about the purpose of the registers, although at a time the Government is being criticised for allowing excessive and inappropriate developments in rural and Green Belt areas  he presented the proposal as being a means of conserving the countryside;

“We want to help hard working families and first time buyers to own their home and to achieve this by building on brownfield land wherever possible to help protect our valued countryside. The register helps deliver both of these at a stroke.”

However, critics in the archaeological and heritage community are swift to point out that the concept of Brownfield Development Good, Greenfield Development Bad, is far too simplistic and that brownfield sites can contain nationally and even internationally important buildings, not to mention archaeology of periods other than the most obvious.

For example,  the brownfield sites in and around Woolwich Arsenal in south east London,  which is  currently undergoing extensive redevelopment under previous planning rules, contained evidence of a significant Pre Roman and Roman settlements as well as medieval kilns, not to mention a roll call of highly significant listed industrial buildings from the 18th and 19th centuries.  Indeed, the Grade II listed Building 11 was recently saved from proposed demolition to facilitate building a taxi rank for the  Cross Rail project after an outcry from conservation bodies and local people.

In its response to the consultation on the DCLG’s proposal changes to planning rules the Heritage Alliance, the representative body for heritage organisations, stated that while it supported the appropriate redevelopment of brownfield sites tailored to the needs of local communities;

“We are concerned, however, about the impact on undesignated heritage assets and on the setting of adjacent heritage assets of the proposal to grant ‘permission in principle’ for sites on local authority brownfield registers.”

“We believe that the proposed measures to facilitate the delivery of brownfield land for housing must contain adequate safeguards to ensure that the significance of any heritage assets are understood, and that such assets are adequately managed and protected in line with the NPPF.”

A separate joint response from the Council for British Archaeology [CBA], the Association of Local Government Archaeological Officers [ALGAO] and the Chartered Institute for Archaeologists [CiFA] also expressed major concerns arguing that;

“Any proposed changes to the NPPF should ensure not only that appropriate assessment and evaluation is undertaken before sites are entered on a register or allocated in plans, but also that legally-binding requirements for mitigation and/or compensation are imposed or secured where relevant and at an appropriate time.”

The Heritage Alliance also told the Government that it also fears the impact of the plan for Brownfield Registers, plus other measures in the Housing and Planning Bill which is currently making its way through Parliament.   Concluding its submission to the DCLG consultation the Alliance commented that while it accepted that there was pressure on the Government to deliver homes;

“We are extremely concerned that in the rush to meet the demonstrable need, some of the measures proposed in both this consultation and in the Housing and Planning Bill 2016, will result in the loss or damage of heritage assets in England.”

This stance was echoed in even stronger terms in a joint submission to the consultation from the Council for British Archaeology [CBA], the Association of Local Government Archaeological Officers [ALGAO] and the Chartered Institute for Archaeologists which warned the Government;

“If there is a presumption in favour of the development of brownfield land in plan-making and development management, development is likely to be permitted which will cause significant harm to heritage assets and consequently be unsustainable. This not only harms the historic environment but also introduces uncertainty, delay and cost to the development process when archaeological remains (some of national importance and some involving human remains) come to light later in the planning and development cycle.”

The use of the term unsustainable is significant because the National Planning Policy Framework, the Government’s overarching planning policy tool, requires that development should be “sustainable.”

Elsewhere in the Government the recent Culture White Paper from the Department for Culture Media and Sport  reinforced the potential for the historic environment to enhance local communities culturally and economically while acknowledging that developers often preferred to avoid or even demolish heritage buildings stating that;

“The development of our historic built environment can drive wider regeneration, job creation, business growth and prosperity. However, some developers regard these projects as too risky to take on, because of their heritage status. This is a particular issue in parts of the country where the property market is less buoyant and where there may be a lack of local expertise to call upon. Historic England has a key role in ensuring that developers and local authorities have the confidence to transform their historic places, ensuring that new development supports and enhances what is distinct and special about them.”

Cynics will point out that it is ironic that Mr Clark appears in the DCMS White Paper, being quoted as saying;

“…We want our national and local cultural institutions to work together to support places to harness the power of culture to drive economic growth, education and wellbeing.”

However, the Culture White Paper committed no new resources to Historic England and other bodies who would be required to undertake such support.  Equally, in announcing a pilot programme for Brownfield Registers, which just happens to include some of the largest and in heritage terms, potentially richest, areas in England and which appears to contain no safeguards for the historic environment,  many will think that Mr Clark and the Cameron Government has shown just how much it really believes in the fine words in the DCMS White Paper and precisely what value it places on the expert opinion of expert Archaeological and Heritage bodies.

The DCLG was approached for comment, but has not replied so far.

Both the CBA and the CiFA were also approached for comment, but neither has yet responded.

In a piece of research published on 16 March the Campaign to Protect Rural England [ CPRE] stated that in its opinion any rules for promoting Brownfield development should:

Meanwhile, in a written submission Historic England told the Parliamentary Communities and Local Government Committee that it was concerned that with so many reviews into aspects of planning policy underway;

“there is a real risk that the interrelationship of the various changes proposed cannot be properly understood, and their cumulative effect adequately assessed”.

“Historic England is keen to ensure that unintended consequences do not arise from the various changes, and would be happy to work with DCLG on matters of detailed wording.”

Of course, with Property developers donating £3.3 million to the Conservative Party in the three years before the publication of the National Planning Policy Framework in 2011, with high end property developers donating almost £800,000 to the Conservative Party in the run up to the 2015 General Election and with Lord Bamford of JCB being the Party’s largest single doner [donating £3,786,249 in corporate and individual donations since 2001], many will wonder if the consequences are unintended at all.