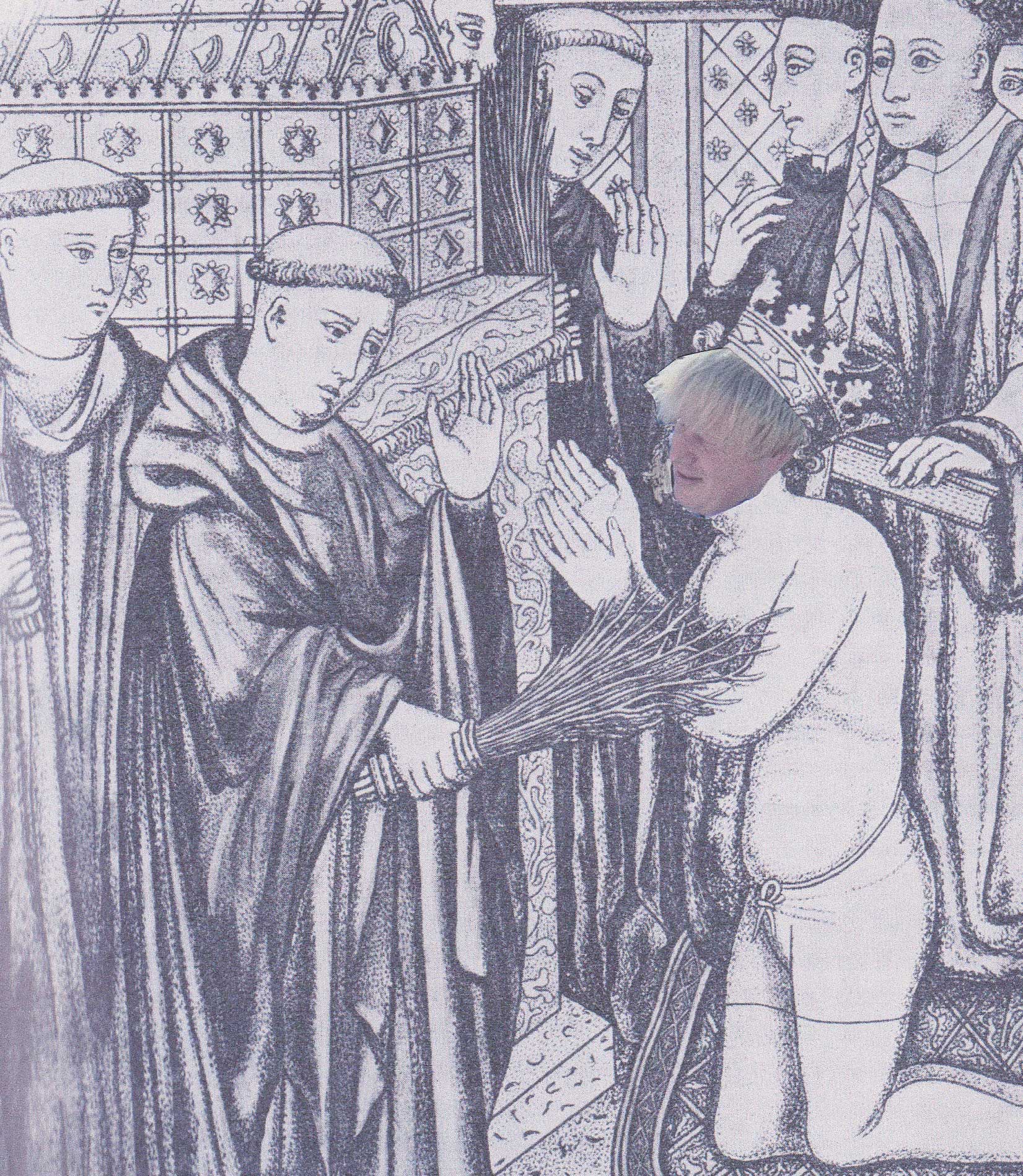 Ser Boris Johnson dreams of appearing before the London Assembly to be whipped in penance for the sin of prejudged procurement, and doing favours for friends.

Ser Boris Johnson, Mayor and High Yeceros* of London Landing as in the dying days of his pomp and power.

*Yeceros:  An honorific  title bestowed on Ser Boris  awarded on account of the legend that in every generation one child is born who is descended from an ancient and drunken assignation between a Yeti, which accounts for the wild mane of blond hair and a Rhinoceros, which accounts for the creature’s thick skin rendering it impervious to arguments or shame.  Also named for the characteristic inability of the Mayor to say no to family friends and property developers with wads of cash.

Deserted by allies over his dithering about which side to back in the great referendum on whether to declare independence from the Iron Throne and with his Chief Necromancer, Meister Lynton Krosby, Flinger of Dead Cats,  switching allegiance to the rich young pretender, Ser Zac, not even Lebedev, the Court Jester, could lighten the Mayoral mood with a tribute so glowing it read like a satire.  Instead, the mayor waited, grim-faced, for the latest embarrassing revelation from the pen of Wylliam Hurst, the Master Whisperer in the Journal of the Architects, who seemed to be able to read the Mayor’s very plans; as could anyone after a freedom of Information Act request, a fact which the Mayor cursed himself for having forgotten.

Meanwhile, in the Great Chamber which housed the Assembly of London Landing, the Assembly Members [AM’s] gathered and in a tradition which dated back to the far time of Ser Ken, the First Mayor who was called “Father of Newts”, they prepared put the Mayor to “the Time of Questions”.

The Mayor entered and took his place sitting upon the Assembly’s great leather throne, with his back to the river and the ancient royal prison of the Tower, which loomed through the north wall of crystal glass against the leaden sky.

The ancient skyline of the Tower was not yet completely crowded out by the new vertical mansions which were being built all across London Landing by the Mayors new friends.  They were known as “the Few” or “They Who Can Pay”, but behind closed doors and in the illegal broadsides which were handed out in the streets and Inns they were called “The Sullied” on account of the widespread belief that many had moved to London Landing because of the belief that the pickings were rich, the Mayors regulations light and the reach of the Law from their homelands across the seven seas too short.  In such company the great Tower represented a place the very presence of which reminded Mayors there was a price for failure [and for being found out].

Indeed, like the slaves of ancient times who whispered in the ear of a victorious generals, the great Tower seemed to say;

“Remember you are mortal.”

But for this Mayor, the slave added a terrible vision of mayoral mortality;

“For Winter is come early and the Judge comes too, in review of your e-mail which made promises far too soon to British Land over Norton Folgate.”

Adding to the tension of the meeting was the fact that the Assembly had gathered against the background of the Mayors favourite master of illusion,  Meister Thomas Heatherwick, facing still more criticism over his fantastical Garden Bridge.  The construction which seemingly had so beguiled and befuddled the Mayors senses.

Even as the Assembly gathered rumours were running that Ser Amyas Morse known as “Iron Banker”, Meister of the National Audit Office, had described the funding of Meister Heatherwick’s pet project by the High Vi Sparrow, Chancellor Osborne of House Tory as “unorthodox”.  A word which chilled the blood of the Mayor’s bond men, who feared being called to account before the great inquisition of the Westminster Ironborn of the Green Benches.

Ser Tom Copley, the Chief Wilding of House Corbyn of the North [London], began the Time of Questions with an account of the Mayor’s dragon flight to Los Angeles which was paid for by the citizens, even though it did not appear in the Mayors chronicle of days, as published on the gates of the Assembly.

“I would, indeed.” said the Mayor, smiling inwardly and outwardly at the thought of a particular person.

“…on the plane to San Francisco.” teased Ser Tom, his hand tightening on the lever of the metaphorical drop onto which Ser Boris was about to step.

“You honestly cannot remember?” Ser Tom said in a tone which suggested that he thought that honesty and the mayor met but rarely.

Thinking himself free, Ser Boris launched into a catalogue of self-justification.

“Transparency, yes!” interjected the Lady Arnold, sitting in the High Chair of the Moderator.

“No. You are talking twaddle…” the Mayor subsided, resorting the same childish argot which he always adopted when he was caught with his pants on fire.

However, wounded and angry as he was, this was just the opening encounter in the latest episode of this Game of Garden Bridges.

The silk toned speaker was no enemy or sell sword, but one of Ser Boris’s own bondsmen.  Ser Andrew Boff, called “Razor Tongue”, the  AM of Londonwide for House Tory.

Ser Boris turned to take in the Assembly with a tone of utter reasonableness.

Ser Andrew was certainly not convinced, particularly by the reference to the Evening Standard which everyone knew to be one of the Mayor and Meister Heatherwick’s familiars.

“That is the top end I think of the of the estimates,” shot back Ser Boris thinking he had the drop on the would be assassin.  “and there is quite a lot of contingency built in.”

Ser Andrew smiled as he drew a verbal stiletto and carefully inserted it into the most tender part of the Mayors argument.

“It is the figure which is published by the Garden Bridge Trust on their website,”  With the blade sunk deep, Ser Andrew fixed the Mayors eyes, and twisted it “and similarly they say on their website also say that they are £30 million short.”

In a desperate attempt to deflect the blows the Ser Boris reeled back and reached to unsheath his great sword, fashioned from the most slippery of steels, forged in the fabled lost furnaces of Tata.  Upon the blade was inscribed the sword’s name in letters of fire.  The sword was called “Distraction”.

“I can only think that the negativity surrounding this comes from a certain amount of professional jealousy from the architectural world, who don’t happen to, you know, are not sure about the architectural qualifications of Thomas Heatherwick and I think there is a certain amount of that going on in some of the coverage.  And the rest of it, I think, is politically driven twaddle!”  Ser Boris harrumphed.

Lady Jenny Jones, Mother Of Greens, spoke aloud to the room saying “We don’t want it?”

“I don’t understand why you don’t want it?  I thought the Greens liked Gardens.” sneered Ser Boris.

But in spite of the attempts of the increasingly desperate Ser Boris to defend himself and the credibility of his Garden Bridge Project the verbal assassination continued as Ser Andrew drew another stiletto which he pushed up to the hilt into the Mayoral logic .

“So the potential is there for us to have a half finished bridge?”

“…perhaps we could build a Garden Pier way out to Lambeth and stop short.  I don’t think that’s likely to happen.” quipped Ser Boris attempting to counter with his own jest.

Ser Andrew  warded off the joke and struck the Mayor another stinging procedural blow.

“How would a Garden Pier meet the objectives of TfL to assist in getting people across the river?” he said coldly twisting the blade once again.

“I am absolutely confident that the funding gap can be, as it were, bridged.” countered Ser Boris, but the Mayors parrys were becoming weaker and more obvious.

“It’s not just the funding gap, it’s the gap between the shore and the bridge that I’m interested in.” Ser Andrew struck again in a style which would have had the legendary exponent of the Game from long ago and a fantasy kingdom far away, Tyrion Lanister, grinning from ear to ear.

“As you’ll appreciate the gap at the moment is very wide indeed, there being no bridge at all…”  concluded the Ser Boris, with many of those present no doubt adding the mental note that given this performance it would probably be a very good thing for London Landing if it stayed that way.

That night, as the Mayor drifted off to a troubled sleep, he was disturbed by the manifestation of Lady Lumley the shape shifter, who appeared at the foot of his mighty, reinforced, iron bed.  She came to him not in her habitual guise as Treasure of the Nation, nor even as Associate Lobbyist for the Meister Heatherwick, but in the guise of his ancient babysitter of childhood days and she seemed to be saying now, as she had done then;

“Boris, Boris, just do as you are told…”

It is not known if, following the latest Time of Question  at London Landing, Ser Boris has also been disturbed by visions of assassination by crossbow bolt, fletched with purest FOI Requests, while seated on the City Hall garderobe.  But he knew that after the on the strength of the performance of Ser Andrew, he would be well advised to keep the door to the Mayoral throne room locked, at least until he could finally escape up river into permanent exile at Westminster Landing on 5 May.  That said, he feared that even then in Lady Theresa May and the High Vi Sparrow, George Osborne, he faced opponents who were both skilled and ruthless in the dark arts of “The Game” and House Tory were past masters at the art of political assassination.   As anyone engaged in the Game of Politics knows, you must keep your enemies close, and those who claim to be your friends closer still.

However, even more deadly is the truism, dating back to at least the Ides of March 44BC,  that when your supposed friends start to knife you in the front there is no way of spinning the fact that you are in deep trouble.  In those circumstances the alternative of a naked walk of shame from City Hall to Westminster to exculpate the sins of favoritism and rigged process might seem almost attractive, like a quiet stroll in the park, a real park that is.

Ser Boris Johnson, Mayor and High Yeceros of London Landing is in the dying days of his pomp and power.

And Spring is coming.

The Garden Bridge:  Arup Image [Fair Use for the purpose of reporting and review]