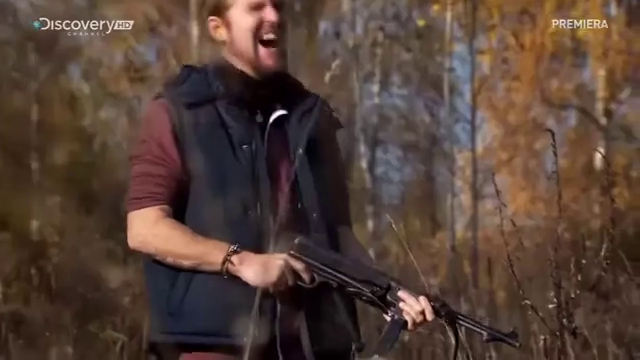 [Discovery Channel Poland:  Fair Use for reporting and review]

Archaeologists, including former Time Team presenters and experts, have reacted with fury to an apparent claim by musician, metal detectorist and co-presenter of the controversial TV series Battlefield Recovery, Kris Rodgers, that in his opinion, in its obtaining of permissions and licences, its recording and reporting of finds and its reburial of human remains, the Channel 5 series was the opposite of, and by implication superior to, Channel 4’s long running archaeology series “Time Team”.

Mr Rodgers, who posts on internet forums and on You Tube as “Addicted To Bleeps”, had stated in an earlier post on the UK and European Metal Detecting Forum, that “Archaeologists are capable of politician levels of hypocrisy”  However, he opened his latest post by saying that comment was a tongue in cheek “giggle”, then said;

“RE; the show [Battlefield Recovery], I’m still very much proud of what we achieved, and no academic snobbery can take that away from me. Finds recorded and handed to relevant authorities or now in the museums. licenses gained, permissions gained, and brave soldiers and civilians given proper, official burials.”

“in a nutshell, the opposite of time team.”

It is this last comment, which has been taken to suggest that the long running and much loved, Channel 4 series did not record and report finds, gain licences or permissions and treat human remains ethically, which has caused most anger.

Former presenters and experts employed by the programme, were quick to point out that Time Team excavations were always fully compliant with applicable legislation and that such compliance was often referred to by the presenters on screen, not in generic terms in hastily added subtitles as seems to be the case with Battlefield Recovery.  Time Team’s work was also clearly supervised and undertaken by trained personnel, with finds being placed in appropriate archives where they remain available for research.  It was also pointed out that full reports on almost one hundred Time Team excavations are available on line through Wessex Archaeology, with other reports appearing in archaeological journals and in other publications so that the number of sites remaining unpublished as of 2012 could be counted on one hand.  Again, contrary to what was seen on Battlefield Recovery, the excavation of human remains on Time Team was always undertaken by experienced archaeologists and osteologists.  While on military sites Time Team was a pioneer in the best practice for archaeology and media companies of having on site Explosive Ordnance Disposal [EOD] safety cover when investigating a site where dangerous ammunition and explosive devices might be present.

It has also been pointed out that Time Team ran for twenty years and 230 episodes; became a national institution and far from being an exercise in “academic snobbery”, probably did more to demystify and educate a general audience about the process of archaeology than any other programme, attracting at its height more than three and a half million viewers; more than three times the figure achieved by the most watched episode of Battlefield Recovery.

Time Team also pioneered cooperation between archaeologists and metal detectorists, but was also not afraid to question the effects of the hobby as it did in the Time Team Special, Codename Ainsbrook in 2008.

When told of Mr Rodgers comments, Dr Francis Pryor, a former Lead Presenter with “Time Team”, who has also presented specialised series on the archaeology of World War Two for Channel 4, told the PipeLine;

“That comment was cheap, nasty and wrong. To be quite honest I won’t dignify it by responding.”

Mr Rodgers comments may also be causing concern among some metal detectorists and militaria collectors.  thePipeLine understands that, as is suggested in responses on metal detecting and militaria collectors forums, a number of detectorists and collectors fear that the practices shown in Battlefield Recovery, especially the apparently cavalier handling of human remains and allegedly reckless handling of ammunition and explosive devices, which appear contrary to the voluntary UK Code of Practice for Ethical Metal Detecting,  are reflecting badly on their hobby.   Posting in answer to Mr Rodgers, on the same forum thread, another forum user posting as “Fris” suggested;

“I think you need to reflect honestly on whether it [Battlefield Recovery/Nazi War Diggers] was actually not such a great idea, and maybe it’s not just a large number of grumpy archies going mental for no reason.”

“…casts all collectors, and especially collectors of ground dug items, in a horrendous light. Would it be acceptable to have your parent, grandparents, sibling or other family members remains handled like this? Absolutely not. I recommend every buddy that is able to call the station, the news agency, the promoter and complain, and complain again. This is truly disgusting.”

The disquiet at the potential damage the series may be inflicting appears to  be even reaching the highest echelons of the metal detecting hobby in the UK.  Yesterday [26 January 2016] the blog “Northern Ephemera”  reported that Trevor Austin, the General Secretary of the National Council for Metal Detecting which represents many detectorists and endorses the Code of Practice, had stated that organisation’s Chair had written to Channel 5  “expressing concerns” about the series, and that the series would be discussed by the NCMD’s Executive in February, with a view to the organisation agreeing a position on the controversy.  On 12 January Mr Austin had told thePipeLine;

“The Code of Practice for Responsible Metal Detecting is a document relevant to England and Wales only and is not applicable to other countries which may have different laws and regulation regarding the use of metal detectors, digging of archaeological material or the discovery of human remains. The C of P is a voluntary document which the NCMD has endorsed and recommends as good practice to its members  when detecting in England and Wales for which it was drafted.”

thePipeLine approached ClearStory, the makers of Battlefield Recovery through its public relations company and asked if they wished to comment on Mr Rodger’s apparent allegations regarding “Time Team”.  Up to the time of publication ClearStory has not replied.

We also asked Jim Mower, a former development producer on Time Team [the person in the production team who actually coordinated the pre-production and post excavation elements of each programme, including permissions, research designs and health and safety risk assessments],  how he reacted to the apparent attack on the programme’s integrity by Battlefield Recovery’s Kris Rodgers.  Mr Mower told us;

“Whilst I am certain that responsible metal detecting can make a valuable contribution to our knowledge of the past  I must take issue with the suggestion, from a member of the detecting community, that Time Team did not fulfil its professional responsibilities to the archaeological community during its long run on British television. As an archaeologist and staff member on the programme for almost a decade I can confirm that Time Team, without fail, obtained all necessary licences and permissions for excavation (including Scheduled Monument Consent, Human Remains licences and Natural England Derogation). I know this as I was responsible for obtaining these permissions.

I can also confirm, contrary to the assertion of the poster, that Time Team has an almost perfect publication and archive deposition record. Of 200 excavations, only 5 remain unpublished to date. These are from series 1 when the programme was first finding its feet. I know this as I was responsible for managing the post excavation programme. Over 20 years Time Team worked with English Heritage (now Historic England), Historic Scotland, Cadw, numerous local authorities, volunteer groups, community groups, schools, University Departments, the Young Archaeologists Club and, yes metal detectorists.

The production investigated over 60 Scheduled Ancient Monuments, made revelatory discoveries and even undertook projects at Buckingham Palace and Westminster Abbey. To suggest that Time Team was somehow unprofessional in its excavation or post excavation practice is to suggest that national heritage agencies, university departments and leading experts of all stripes failed to recognise this for over two decades. Such an assertion is, frankly, ludicrous and unkind.”