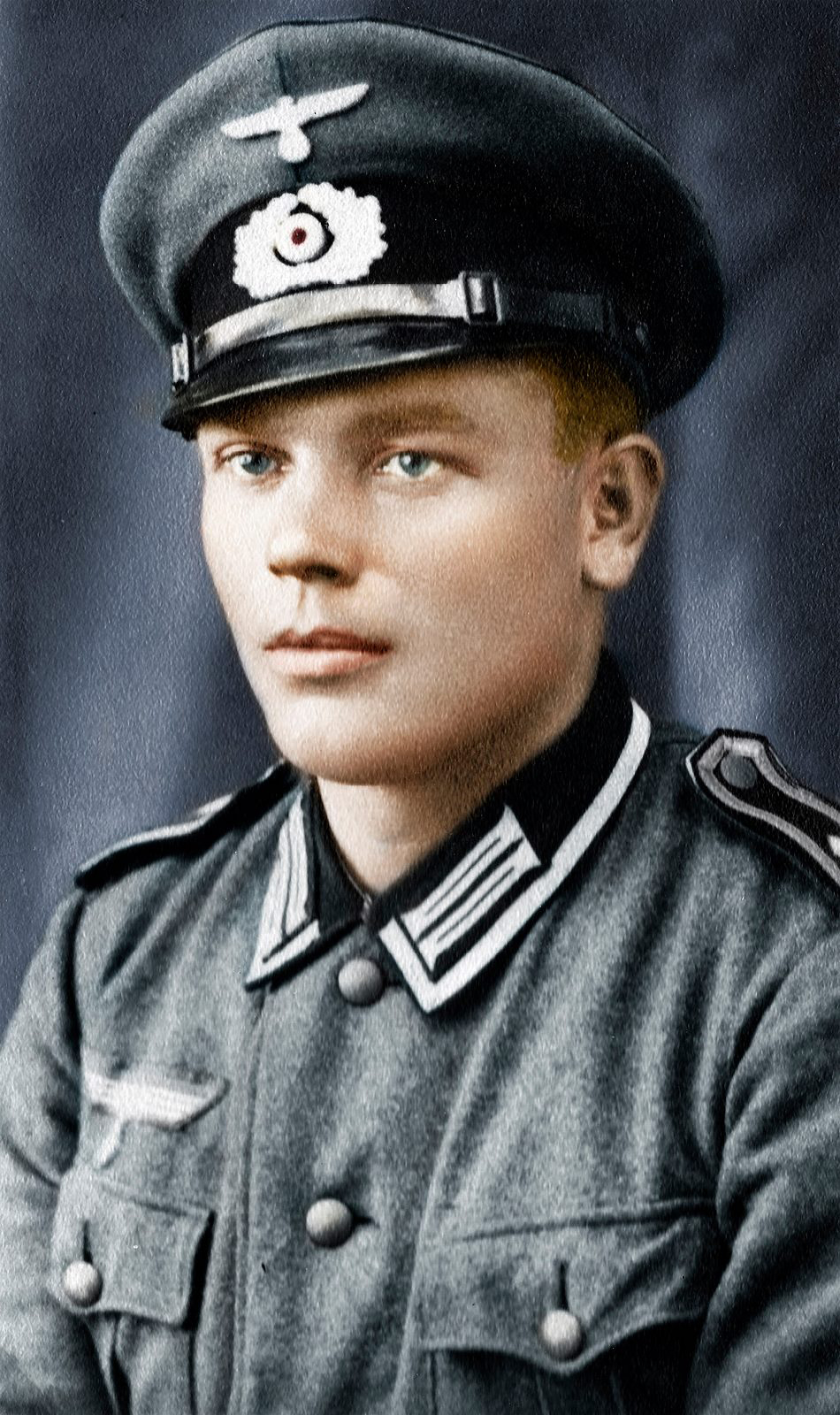 The face of a victim of “Black Digging”,  Feldwebel Heinrich Gilgenbach of Pionier-Battalion 291 KIA near Krasnaya-Ghorka, March 1942  [Copyright:  the Robin Schäfer collection]

German Military Historian Robin Schäfer is the grand nephew of a German soldier killed on the Eastern Front in March 1942.  In this personal view he describes the emotional cost to one family of “black digging” and describes his fear that, far from saving history as the producers claim, “Battlefield Recovery” is an invitation to the ignorant and the unscrupulous which could put that history and even the peace of mind of other families of all nations who still grieve for the missing, at risk.

In March 1942 my great grandparents were informed that their eldest son, Heinrich, had been killed in action during a patrol operation in the area of Krasnaya-Ghorka, in the swamps and pine forests south of Leningrad in Russia. He was the first of their three sons they would lose during the war, the other two were killed in action in 1944 and 1945.

They were told that Heinrich had been buried on a divisional burial ground in a place known as Glubotschka, 12 kilometres south-west of Tosno. For my great grandparents these names where just as alien and difficult to place as they were for me, when I started researching Heinrich’s military career in 2006. While during the time of Heinrich’s death, the cemetery lay more or less safe behind the German lines, that changed when the Soviets opened their offensive to relieve Leningrad in January 1944. Glubotschka was overrun and it soon became forgotten, fell into disarray and was reclaimed by nature shortly afterwards. As the village itself, like so many others in the region, was never reoccupied after the war it did not take long to disappear off the maps completely. Glubotschka became the name of a region, which could only found on some obscure, Soviet era, maps. After about 2 years of work, using veterans accounts and data found in a number of German regimental war diaries I managed to pinpoint the location on modern satellite maps. In 2008 some friends in St. Petersburg did me an incredible favour and travelled into the wasteland of swamps and forests south of the city in the hopes to find the place where Heinrich had been buried.

I was over the moon when a couple of days later they send me some photographs by email and the announcement that they had found the remains of the village and the German cemetery which was still marked by three large earthen tumuli. I didn’t take long until I was able to spend a week in St. Petersburg to have a look at the location myself. My Russian friends had found the correct spot. It was untouched, overgrown by grass and pine trees and the graves mounds clearly visible.

When I returned to Germany I sent a letter to the German war graves commission (the Volksbund Deutsche Kriegsgräberfürsorge or VDK) informing them about our discovery. Finally, after all those decades we would be able to bring at least one of my grandmother’s brothers home to Germany. Personally I never got any direct feedback on my letter, so it came as a bit of surprise when in 2011 I read that the Volksbund had staged an expedition to Glubotschka to exhume the soldiers buried there. What I read came as a bit of a shock as the article in the Volksbund magazine spoke of an expedition to a “partly plundered” cemetery. My fears were confirmed in a telephone call where I was told that the cemetery had indeed been plundered. The team (consisting of German Reservists and serving Russian soldiers) had been able to exhume 21 bodies (out of more than 120 that should have been there). They had found two Erkennungsmarken (dog-tags). 19 of the individuals found could not be identified. The remains of the other 99+ German soldiers had been strewn across the landscape.

My granduncle Heinrich had not been identified. In the years between my visit and that of the exhumation party Russian black-diggers had struck and by retrieving valuables, equipment and dog-tags had efficiently destroyed the identities of more than 119 German soldiers. By stealing their names and identities they were killed a second time. They are now gone forever.
Even though Heinrich was ‘lucky’ enough to have been buried in a registered burial place in 1942 (something denied to his two brothers who lie where they fell in the steppes of Russia and a field somewhere in Silesia), he has disappeared. His grandson will never have the chance to visit his grave.

His dog-tag, like so many others, might have ended up on E-Bay. It might have fetched a price 15 or 20 Dollars and maybe it forms part of someone’s WW2 relic collection right now.
Nearly a million German soldiers still rest on forgotten cemeteries and battlefield all over what was once Soviet Russia. Every German family has a father, a grandfather, an uncle or brother who never came back from the Ostfront and who is now resting in a shell crater or ditch somewhere in Stalingrad, Demjansk, Courland, the Crimea and in countless other places where German soldiers fought and died. Every year thousands of those men are effectively killed a second time by those who make a good living by selling their equipment, their medals and their dog-tags. Whereas in the past decades these ‘black-diggers’ have been primarily Russian, a quick look on YouTube and various “collectors” boards on the internet shows that today their ranks a swelled by metal detecting collectors from Holland, Great Britain, France, America and even Germany. The severity of damage that is done by those people can’t be described by words.

I was among those who fought against the screening of “NAZI WAR DIGGERS” when it was first announced in 2014 and I happily joined the fray again, when I learned that Channel5 was to show in Britain under the new name of “BATTLEFIELD RECOVERY”.

I can hardly describe how much this show offends me, so I try to sum my main concerns as briefly as possible.

I know that the producers of the show worked with semi-official organisations in Poland and Latvia (Pomost and Legenda). Having witnessed the exhumation of WW2 casualties myself, I know that the methods used by groups such as this are probably not state-of-the-art archaeological techniques. Looking at the mass of bodies (both Russian and German) that are still out there, these groups work to achieve quick results, mainly trying to establish an identification of remains found. Yes, sometimes their heavy machinery is parked on the lip of a hole and yes, they do not usually wear helmets or protective shoes. Nevertheless, they do a great job for both the German and the Russian war graves commission. I do not have a problem with that. I also do not mind that the military equipment these groups find might not necessarily end up in Museums. Military museums all over Russia, Latvia and Poland are crammed with rusty plunder and it is no wonder that they are not interested in yet another rusty steel helmet. I do not have a problem with that either.

What I have a problem with is, that instead of producing a documentary on the great work these groups do, ClearStory chose instead to create to what amounts to a series of advertisements promoting the illegal digging of relics in the greatest, free of charge, militaria store in the world. And not only that, instead of using the experienced professional archaeologists they had actually approached for advice and then ignored, ClearStory made the insulting choice of choosing a renowned dealer of ‘Nazi’ militaria and a bunch of British metal detectorists with no relevant experience whatsoever to host the show. By dropping them into locations chosen by the professionals of Legenda and Pomost and by making it appear that it is actually almost entirely them (and only them) who are doing the digging, they have created what is to me and many other people a cheap and nasty piece of television that is likely to tempt dozens of metal detectorists to go ‘over there’ to dig a steel helmet and a cool machine gun themselves.

The show has zero educational value. I failed to hear any mention on how many millions of Russian and German men are still out there in unmarked graves. I failed to hear any credible description of the Courland battles, or the horrible massacres that happened in and around Poznan in January 1945. The hosts of the show have no link to the men whose remains they are digging up. Faced with a complex set of human remains, or an unexploded munition they appear utterly clueless (which is possibly because they are indeed utterly clueless about the real meanings and dangers of these things). In fact all too often they behave like children playing soldiers, treating guns as big toys and the fact that Herr Gottlieb manages to force himself to squeeze out a few tears for the camera whenever he handles a skull or bone does not make it any better. For me it makes it even worse.

Not only due to my family history, but also due to my job as a military historian, I identify with the fallen and their families. I have spent unmeasurable time looking at the faces of the missing in the photographic registers published by the German Red Cross in the early 1950s. Millions of faces, millions of stories of men whose final resting place is unknown and whose identities are wiped out by illegal digging. Illegal digging, which is (in my opinion and that of many experts who are not heard in the films) only promoted by “BATTLEFIELD RECOVERY”.

This must not be allowed to continue.

Two pages of lost lives pointing to grieving families, a two page spread  from the German Red Cross list of the missing.
The 225 volumes contain the names and photographs of 1.4 million missing soldiers [Courtesy:  the Robin Schäfer collection]