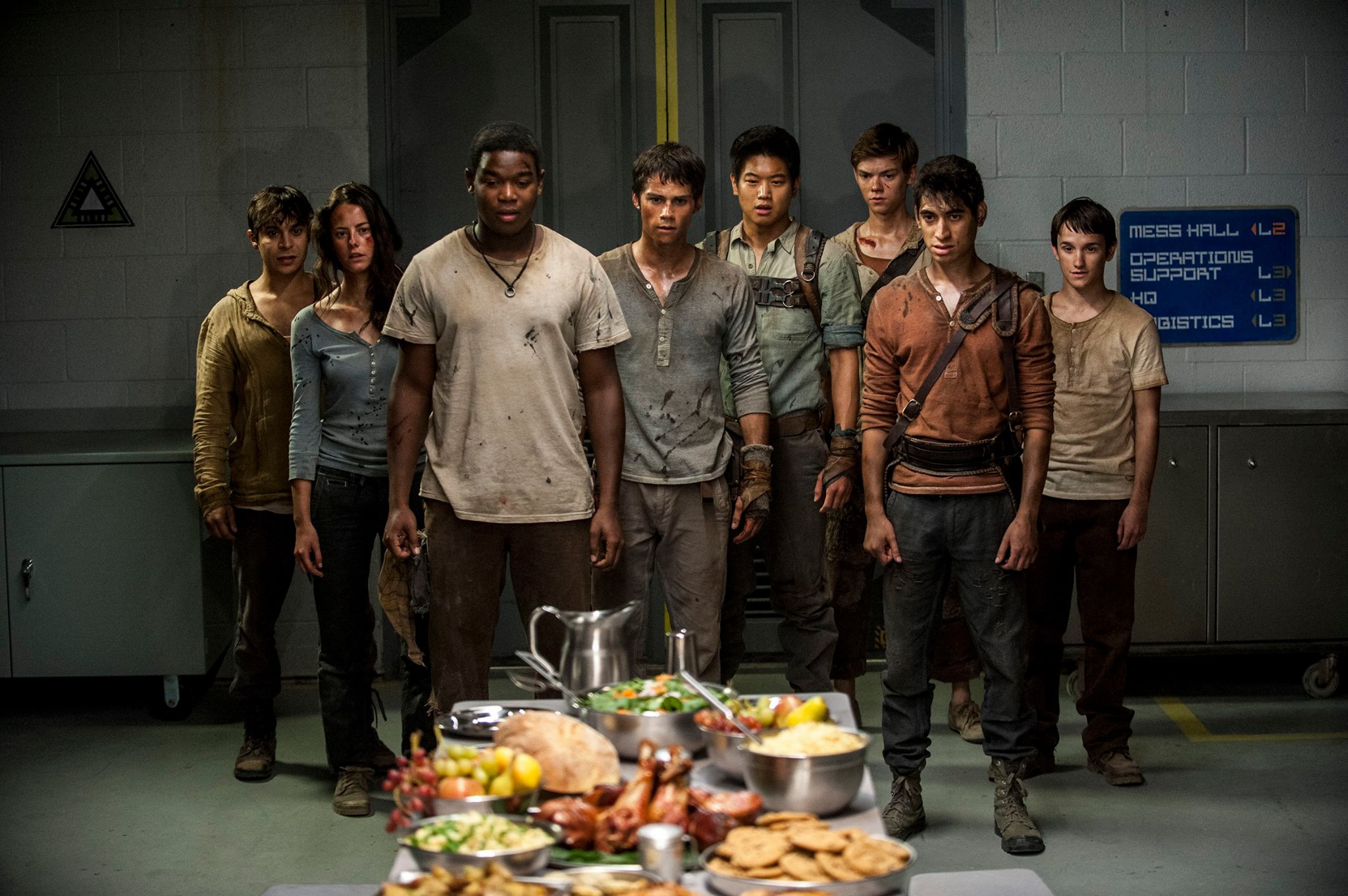 The Cursed Cast of “Maze Runner: the Scorch Trials” on a lunch break, but no Native American artifacts to be seen.
[20th Century Fox via Facebook]

Questions are being asked about the origin and reasons behind rumours of a “curse” linked to the unauthorised removal of Native American artifacts from the location of the new action blockbuster “Maze Runner:  the Scorch Trials”.  The rumours came to public attention after a casual comment by heartthrob actor and star of the film Dylan O’Brien during a soft publicity interview for the new film.  In the course of an interview to mark the opening of the dystopian action sequel to last years low budget hit “The Maze Runner”, O’Brien told chat show hosts Kelly Ripa and Michael Strahan  that, during filming on a Native American site on the private Diamond Tail Ranch, north of Albuquerque, New Mexico, unidentified members of the film unit took Native American artifacts which were lying on the ground in the area they were working, when they had specifically been told not to.  The area is associated with the Pueblo people and the claims have prompted protests and an investigation by the film’s producer 20th Century Fox.   However, five days before O’Brien’s comments, in an interview with the Radio Times published on 10 September, British actor Kaya Scodelario linked the unauthorised removal of a Native American arrowhead from the location to fellow Briton and cast member, Thomas Brodie-Sangster and claimed that as a result of this inappropriate behaviour the last weeks of the shoot were “cursed”, with members of the cast and crew falling ill or being involved in accidents.

The row was initially sparked in a television interview on the “Live with Kelly and Michael” show in the USA, where O’Brien explained that when the film unit arrived at the location, which had not been used for filming before:

“They gave us this big speech when we got there to shoot, and they said, ‘Don’t take anything. Respect the grounds,” O’Brien then added “They were very strict about littering and don’t take any artifacts — rocks, skulls, anything like that. And everyone just takes stuff, you know, obviously.” https://www.youtube.com/watch?v=wsEnu67sDrU#t=4m53s

O’Brien’s comment that members of the unit had removed artifacts led nineteen year old fan Maeve Cunningham to set up a petition on the Care2 petition website demanding that:  “O’Brien, the film’s director, and other crew members involved need to apologize to Pueblo tribal leaders for their behavior and return any artifacts they removed from the site.”

Explaining why she was taking this action Ms Cunningham is quoted as saying: “Native American rights are important to me, and hearing someone who you have a lot of respect for completely disregard someone else’s culture and basic human rights in such a disrespecting manner was just this big letdown for me. I believe a lot of other fans are disappointed and angry, too.”

While no-one has accused O’Brien or other members of the film’s cast and crew of deliberately stealing artifacts for trafficking, and it is not even clear from his words if O’Brien himself actually took any items at all, everyone concerned with the filming at an administrative level seem to be taking the actor’s comments at face value and seriously.  This is hardly surprising given the sensitivity of any action which might seem to disrespect the culture of Native American peoples.

Nick Maniatis, the Director of the New Mexico Film Office told Associated Press:  “If artifacts were taken, we believe they should be returned immediately. Twentieth Century Fox has been extremely cooperative and shares the Film Office’s concern and sensitivity toward the matter,”

Meanwhile, putting the alleged thefts in a wider context archaeologist Maxine McBrinn, curator of Archaeology for the Museum of Indian Arts & Culture in Santa Fe, pointed out that while it is illegal to take Native American artifacts from public land, it is not illegal if the land is private.  However, Ms McBrinn also told Associated Press that “Regardless, it’s disrespectful,” adding. “When you remove an item, you destroy the archaeological information in the contexts it provides. You have done damage to the information.”

“Twentieth Century Fox and The Scorch Trials production team take these issues very seriously and we are conducting a thorough investigation into the matter,” the studio representative also pledged that:  “If any artifacts were mishandled or removed from the location, we will do everything to ensure they are restored.”

However, in the latest twist to the saga, while Mr O’Brien’s comments in the USA may have kicked off the row, it now transpires that former “Skins” star Ms Scodelario told what is essentially the same story to the UK magazine “Radio Times.com” at least five days, if not more, before the O’Brien interview with Kelly Ripa and Michael Strahan was published on Youtube on 15 September.  In an interview with Huw Fullerton published on 10 September 2015 Ms Scodelario is quoted as saying:

“The last two weeks we shot on an ancient burial ground, a Native American burial ground,” the actress explained to us. “And we were told when we got there that we weren’t allowed to pick up any rocks, or arrowheads, or artefacts, because it would bring bad luck.”  She continued:  “But Thomas Brodie-Sangster picked up an arrowhead, and took it home to his Mum. And then the next day five of us ended up in hospital. I think it’s all his fault.” http://www.radiotimes.com/news/2015-09-10/maze-runner-sequel-the-scorch-trials-was-cursed-by-a-native-american-burial-ground-says-star

This suggestion was supported by the director of “Maze runner:  the Scorch Trials” Wes Ball who told the same interviewer “It was just crazy, the kind of luck that we had.”

This seems to demonstrate that the story that native artifacts had been taken from the Diamond Tail Ranch location was current in the “Maze Runner:  the Scorch Trials” unit to the extent that two of the leading actors and the film’s director felt able to highlight it in separate publicity interviews and wanted to suggest that standard ailments and accidents, which might be common to any film unit working hard on location, towards the end of a long shoot on an action movie, might be down to the suggestion that members of the unit had angered the spirits of the Pueblo people by getting bored and taking a few inappropriate souvenirs.   As Ms Scodelario told “The Radio Times”.  “The film was haunted – it was cursed! Just at the end, though.”  In this scenario the whole “curse” was just a leftfield story which nobody expected top bite back in the way it has because no-one took into account the feelings of the owners of the ranch, archaeologists and the Pueblo people.

Of course there is another possible interpretation for the fact that both Mr O’Brien, Mr Ball and Ms Scodelario seem to have independently come out with the same story in separate interviews.  That is that someone in the “Maze Runner” PR machine thought that such a story, which plays to a standard reality TV and teen horror, supernatural trope appearing from “the Amityville Horror” to “the Simpsons”, would be a good hook to slip into interviews and garner a few headlines worldwide.  thePipeLine is not suggesting for a moment this is what happened.  But the story has now gone viral and everyone who is covering it is name checking the film, so in the greater scheme of things, upsetting a few archaeologists and even the Pueblo people, might just be some minor collateral PR damage on the way to a $211 million box office take so far.