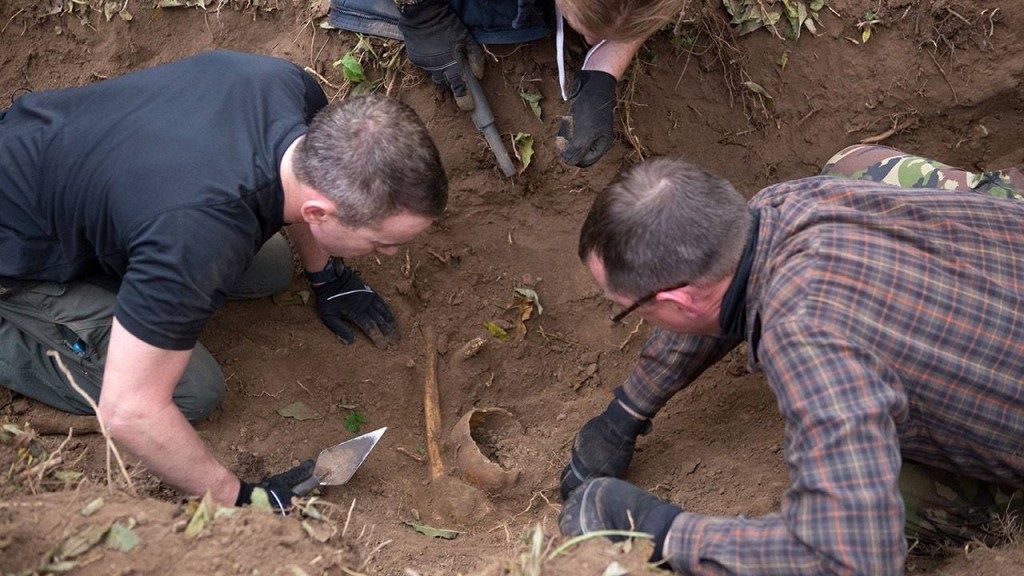 News has emerged that a Nazi Zombie may be about to walk the TV schedules of Britain.

In an apparent object lesson in trying to polish a turd, London based production company Clearstory have rebranded the programme formerly known as “Nazi War Diggers” as “Battlefield Recovery” and clips from the programme appear in Clearstory’s current showreel on YouTube.

The relaunch of the programme, which was unceremoniously pulled from the schedules by the commissioning network the National Geographic Channel in the Spring of 2014 after a worldwide outcry from the archaeological community, is accompanied by this cringingly hilarious explanation for the programme’s original disappearance.

Now marketing people can be blamed for a lot of things, but no-one denied that the visual material shown in the catastrophically misjudged publicity for the original scheduled broadcast actually came from the series.

In fact far from being “misinformed speculation” the work of a number of archaeologists including Sam Hardy, Paul Barford, Dr Donna Yates and the magazine Heritage Daily                                      [ http://www.heritagedaily.com/2014/03/springtime-for-hitler-and-nazi-war-death-porn-diggers/102632 ] soon established that the series was an unbroadcastable catalogue of unethical, bad and even dangerous practice, starring a group of ammateur metal detectorists from the UK and a US based dealer in Nazi memorabilia, who were metaphorically parachuted in to Latvia and Poland, to undertake some of the most sensitive archaeological work possible, the excavation of human remains on battlefields and sensitive sites of ethnic and political conflict. [And to dig up as many big boy’s, explosive, toys as you can find on one of the most dangerously contaminated battlefield sites in Europe]

Certainly there were allegations that local workers in Poland were far from happy with what went on during the filming  at sites allegedly including the mass grave at Sarbka where the remains of two women in German uniform were recovered.  Shortly after the cancellation of the original broadcast a spokesperson for the respected organisation POMOST which cooperated with the filming but which had no editorial control over how it was presented, told thePipeLine that the work in Poland was undertaken according to Polish law by trained personnel and Clearstory’s  “talent” were only inserted into the scenes to make it look as though they had more involvement than was actually the case.  If that is what happened it is standard “Reality TV” fakery   However, as a result of the experience and the marketing of “Nazi War Diggers” POMOST  had concluded

“We don’t want to cooperate with National Geographic or Clearstory any more. We’re not interested in taking part in TV series like “How to learn to dig a grave in one weekend” or “Many Nazi Badges Waiting For You In Middle Europe Underground”.

The situation in Latvia seems to have been far looser.  In one sickeningly memorable scene in the original programme trail militaria dealer Craig Gottleib demonstrated the programme’s “proper and due respect for the fallen” by breaking and then hoiking the femur of a dead soldier out of an excavation section and then holding it up to his shoulder, mistaking it for a humerus or arm bone. There were also allegations, reported in thePipeLine and never denied by the programme makers, that untrained personnel were recorded excavating weapons, live ammunition and unexploded munitions.   An activity which regularly results in the death or serious injury to metal detectorists and collectors across the former battlefields of Europe.

1.  Has the series been completely re-edited since it was cancelled by National Geographic  in 2014?

2.  If the series has been re-edited was the new edit done with the advice of recognised conflict archaeologists and specialists in human remains?  If so who?

4.  Does the series show any of the three UK metal detectorists involved, or Mr Gottleib, excavating live ammunition, grenades or other explosive munitions?

5.  Does the series show any of the three UK metal detectorists or Mr Gottleib posing with excavated weapons or ammunition?

If Clearstory cannot answer these questions thePipeLine challenges the company  show the completed series to a panel of recognised Conflict Archaeologists and listen to their advice as to whether the series is broadcastable.

If Clearstory does not do this then they will be in the same situation that players of the first person shooter “Call of Duty” find themselves in when they get to play the Nazi Zombie level.  This particular Nazi  Zombie of a TV series will be taking fire from all sides until it is GAME OVER and in true Nazi Zombie Apocalypse style it won’t be pretty.

Polish based blogger Paul Barford who as we state above, was very active in exposing the facts behind the PR smoke and mirrors of “Nazi War Diggers” reports that the series has already debuted on Polish TV under a title which translates into English as “”Searchers for Treasures (sic) of the War”

Mr Barford reports that “Basically what I see changes nothing at all in my assessment of the programme, indeed, it is worse than I expected.  It also has attracted some derision of these ‘Angols’ on their forums from Polish artefact hunters.”
http://paul-barford.blogspot.co.uk/2015/09/clearstory-statement-on-nazi-war-diggers.html