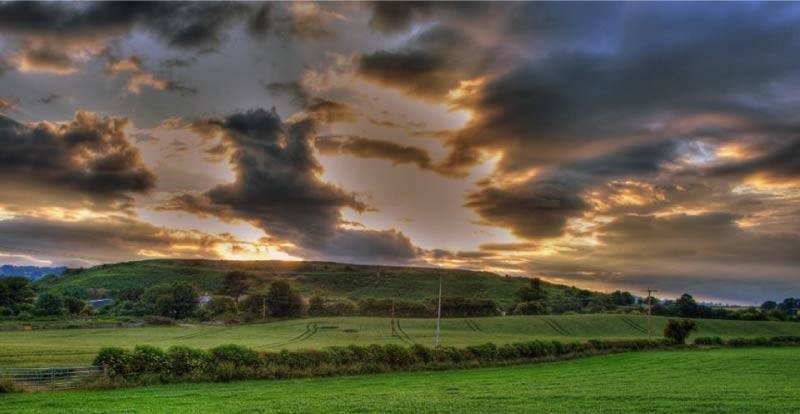 After reports that he was to write to Ministers to express the concerns of campaigners against a proposed housing development in the shadow of the nationally important Old Oswestry Hill Fort,  campaigners may be disappointed that Conservative MP for Shropshire North, Owen Paterson, has told the Shropshire Star newspaper that he is not taking sides over the controversial Old Oswestry Hill Fort development.   Meanwhile, as today’s Observer newspaper reports,  there are growing signs that experts and organisations in the wider heritage and archaeological sector are seeking to turn Old Oswestry into a test of the boundaries of the National Planning Policy Framework and the ability of the sector to intervene to modify, or even block, developments which are seen as damaging to historic sites and their context in the landscape.

“They came to my surgery and asked me to write the letters…People often ask if I can write on their behalf. Usually it’s only to Shropshire Council, but they wanted me to write to Greg Clark as well….But I never take sides on planning matters. I haven’t the whole time I’ve been in office and my predecessor never did either.”

Obviously an MP simply writing to a minister to express the concern of constituents carries far less weight than that same MP endorsing that concern.  That said it is unlikely that campaigners would have held too much store by Mr Paterson’s low key intervention.  During the recent General Election Mr Paterson was the only one of the five local candidates not to endorse the HOOOH campaign.

However, not everyone connected with the Old Oswestry controversy is attempting to steer such a noncommittal course.  Quoted in the Observer, Sir Barry Cunliffe, Emeritus Professor of European Archaeology at the University of Oxford one of the signatories  of a damning letter from leading academic archaeologists attacking the proposed development which was sent to the then Communities Secretary Eric Pickles and then Culture Secretary Sajid Javid in December 2014,  said

“We need a groundswell of feeling that it’s a case of ‘this far but no further’ as far as some of these major sites are concerned…I think that this [proposed development] has grossly overstepped what is ethically acceptable. Old Oswestry Hill Fort is such a good – well, bad – case. It is stark. If we’re going to win the argument at all, this is one where it could be fought fairly.”

“It is worth making a fuss about this particular issue because it does look like the thin end of the wedge. There would be nothing really to stop developing land right up to the very boundary of some of our major archaeological sites.”

Signalling the intensification of the battle over Old Oswestry, and what many in the heritage community see as the overly permissive interpretation of the National Planning Policy Framework by the planning authorities in Shropshire, the Director of the Council for British Archaeology [CBA], Dr Mike Heyworth, also indicated that the binding terms of the Council of Europe, European Landscape Convention [ELC], of which the UK is a signatory, might be deployed and tested in an attempt to prevent the Old Oswestry case becoming the thin end of a permissive planning wedge.  Dr Heyworth told the Observer “The key part of European law may be the European landscape convention…This is a relatively new thing for the UK, not entirely tested yet. That is one which we will be looking at very closely.”

Section D of Article 1 of the Convention states “Landscape protection” means actions to conserve and maintain the significant or characteristic features of a landscape, justified by its heritage value derived from its natural configuration and/or from human activity…” While signatories to the Convention commit to that Landscape Protection in Article 3 which states

“The aims of this Convention are to promote landscape protection, management and planning, and to organise European co-operation on landscape issues. ”

In support of a conservation stance rather than one which permits development close to the Hill Fort site campaigners would point to the broad acceptance that Old Oswestry Hill Fort has the highest heritage value both as an individual site and as a site within the wider historical landscape context of the Welsh Marches.

If national organisations within the heritage community such as the CBA are indeed to begin to use the courts to test what they see as negative aspects of Government and Local Government policy that will be seen as a positive development by many campaigners who have long argued that heritage organisations should have taken a lead from organisations such as the Campaign to Protect Rural England, and Friends of the Earth, and become more outspoken, proactive and if necessary litigious, in challenging Government decisions which, in their opinion, damage the heritage sites.  In this context Old Oswestry might be seen as a trial canter before the big race at the proposed tunnel under the Stonehenge World Heritage Site [WHS], where campaigners claim the short tunnel option would destroy archaeological evidence and blight the landscape within the WHS boundary, simply to save money.

However, at least in the case of the Old Oswestry site such a move could find the CBA and other heritage groups lined up on the opposite side of the argument to the Government’s statutory advisor Historic England, formerly English Heritage.  Recently released  documents demonstrate that Historic England has accepted the inclusion of the Old Oswestry development in Shropshire County Council’s SAMdev plan as long as certain specified steps are taken in mitigation, such as the opening up of sight lines and the control of light pollution.  The view was encapsulated in a comment from a spokesperson for Historic England who told the Observer “Since 2007 Historic England, previously English Heritage, has consistently expressed its concern over proposed development sites near the hill fort and we have worked with the landowners and Shropshire council to find ways to reduce potential impact, including upon its setting.”  In other words, English Heritage/Historic England took the corporate stance that they would not oppose the development outright on conservation grounds, but the organisation would instead seek to mitigate the worst aspects of the plan.

Historic England’s recent about face over acceptance of a more localised, but in its way equally controversial, proposed development, which would have seen King’s College London demolish and replace a number of Victorian buildings within a conservation area on the Strand in London, suggests to some that the senior management at Historic England are aware of the dangers of being seen as too supportive of development plans which have been damned by other experts and heritage conservation bodies, however the problem Historic England faces is twofold.  First, in the drive for growth at all costs the Cameron Government, spearheaded by Chancellor of the Exchequer George Osborne, disposed of the former English Heritage’s property portfolio into an arms length charity which is designed to be self supporting and then gave the remaining statutory body, Historic England, the specific remit of supporting, not conservation, but the same permissive concept of “sustainable development” as is enshrined in the NPPF.  Secondly Historic England, is facing potential budget cuts as the Chancellor extends his austerity programme and looks for additional savings in Government expenditure from non ring fenced departments such as the main departments dealing with planning and heritage matters,  Communities and Local Government and the Department for Culture Media and Sport.  In that context Historic England will be concerned not to be seen to oppose the kind of growth and particularly the drive to build more houses, which the Chancellor demands, in case it is “punished” by a further curbing of conservation legislation and most sensitively, by cuts to its core funding.

While the heritage sector mulls over its strategy for Old Oswestry and just how far it is prepared to push on what is rapidly developing as a “Red Line” issue, political commentators will also note and probably enjoy immensely, the fact that if Old Oswestry does come down to a legal fight based on a UK Government document, the NPPF, being questioned and perhaps moderated and redefined by an European Convention, Mr Paterson’s principled position of fence sitting neutrality will become interesting. Since his sacking as Agriculture Minister by David Cameron in the 2014 reshuffle, over his alleged mishandling of the Badger Cull and winter floods crisis, Mr Paterson has become a leading back bench Eurosceptic and head of the Eurosceptic UK2020 think tank.  At the recent General Election he campaigned  on a personal manifesto which included British withdrawal from the EU’s political arrangements and as we have seen with the attempts of the Conservative right to abolish the Human Rights Act which embodies another European Convention, the European Convention on Human Rights, into UK Law, the Eurosceptic tendency in UK Politics are quite happy to deliberately confuse the older and larger Council of Europe with the European Union if it suits their broad anti Europe agenda.