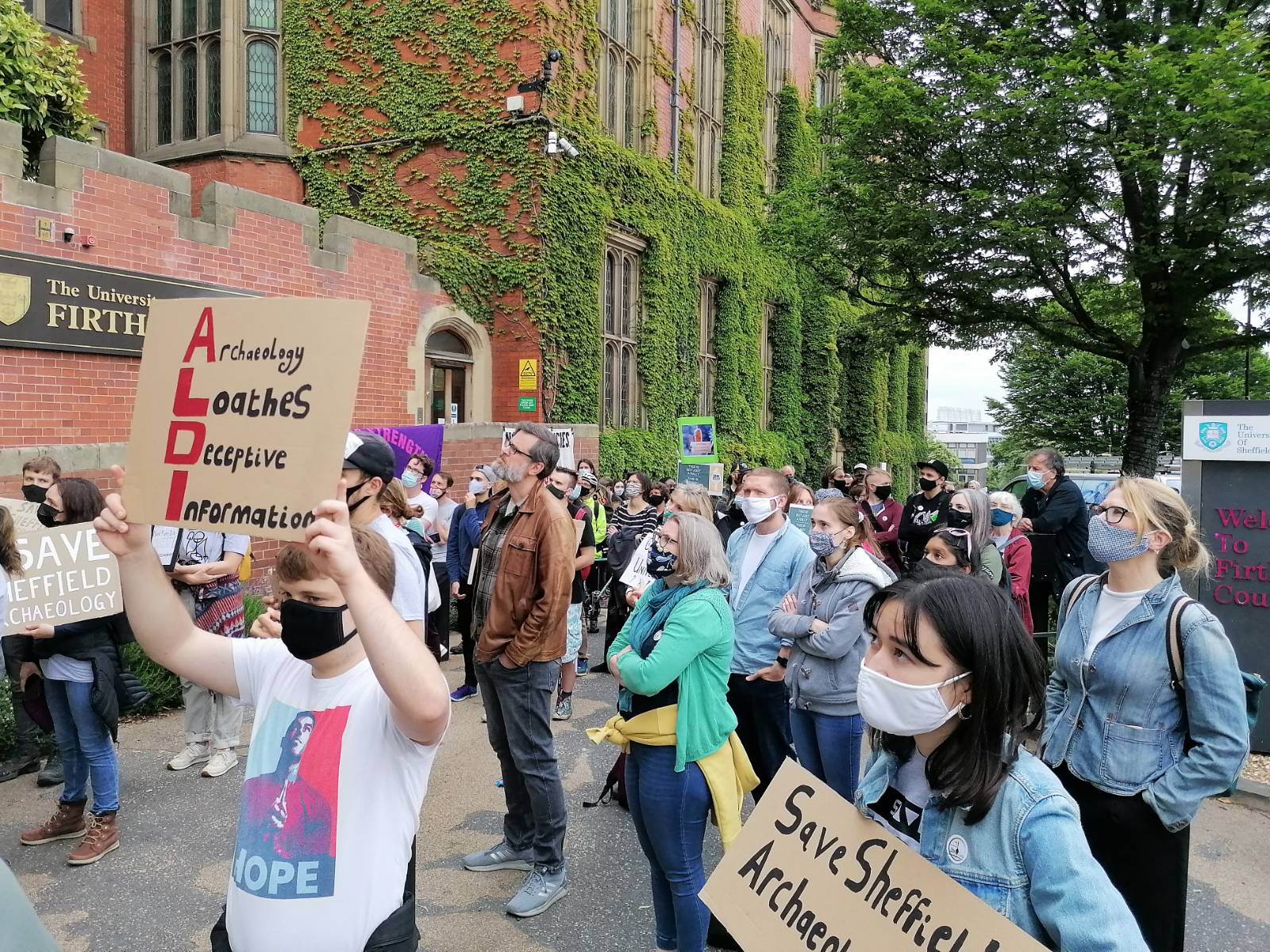 The Faculty of Arts and Humanities at Sheffield University has been accused of “gaslighting” by students attempting to register complaints about comments by the University’s Deputy Vice Chancellor, Professor Gill Valentine, likening some applicants to undergraduate courses to the discount supermarket Aldi and suggesting they could “damage” the University brand. The accusation comes at an especially sensitive time for Sheffield, with the University Council due to meet on Monday [12 July 2021] in order to debate the controversial proposal to close the world famous Archaeology Department. Students are also angry that the University’s ethics watchdog has blocked an investigation into the conduct of a meeting between students and the Archaeology Review team on 12 February 2021, led by the Deputy Vice Chancellor. Students allege they were misled as to the purpose of the meeting and that crucial notes, including some relating to that meeting, have been disposed of, contrary to University policy.

The row over supermarket branding began during a meeting with students on 19 May [2021], led by the Deputy Vice Chancellor of Sheffield University, Professor Gill Valentine.

A witness present at the meeting told thePipeLine,

“At one point during the meeting on May 19th, a student inquired as to the possible advantage of lowering the Department’s entry tariffs to a BBB to which Professor Gill Valentine (who was for all intents and purposes running the meeting) responded that such a change would be “brand suicide”

The witness told us that Professor Valentine went on to say words to the effect that if high end supermarket Marks and Spencer brought in Aldi-level prices, it would attract a different clientele and then M&S wouldn’t feel like M&S anymore.

Our witness explained that they took her Marks & Spencer vs. Aldi analogy as an indication that students with ‘sub-par’ marks were considered inferior and were therefore not desirable.

“I was a student involved in the review and I can corroborate what [they] told you. At the time, my friend and I texted each other to say “do you find this metaphor incredibly problematic?”

“We we’re both shocked and became angrier the longer we sat with the remark.

I think there’s a point to be made that the Uni is happy to have students join via important programs, such as Realizing Opportunities, because it’s looks good for them; while they actively block similar students from attending the university through traditional pathways and view those students as detrimental to their brand.”

“They want to have their cake and eat it too, so long as they can commodify students appropriately.

This point made me particularly angry, because Gill Valentine said to us students that she wished we worked in recruitment, then there wouldn’t be a problem.

The archaeology department is filled with people who volunteer in the community and talk at schools. I’ve done numerous talks to students from non-traditional university backgrounds.

She acted like none of that mattered while also patting us on the head for our enthusiasm.

She can’t have community engagement without us.

She also can’t have only AAA students in the department and also have us reach-out to underserved communities.”

However, when some students attempted to raise this issue with the Faculty of Arts and Humanities the reaction of the Faculty only made matters worse.

Our source told us,

“…when a student reached out to faculty about the remarks, they were told that the comments weren’t meant to offend.”

The Faculty then explained that Professor Valentine’s remarks were intended to relate to strengthening the exam grade tariff and not the relative value of students to the University.

The Faculty added that all students are valuable and that they were sorry the remarks were misinterpreted.

However, the students involved do not accept that explanation, telling us,

“Blaming someone for taking offence to something offensive is gaslighting.

If we look at the DVC’s metaphor more closely, the truth of this is that only some students are valuable, while others are worse than value-less—they’re dangerous to the university and damaging to the brand.

That cannot be misinterpreted.”

Sheffield University has been approached for comment on this issue by thePipeLine twice, but has not yet responded.

Meanwhile, attempts by students to have the conduct of the Review of the Archaeology Department examined by Sheffield University’s ethics watchdog have been blocked.

Students attempted to refer the conduct of a controversial meeting held on 12 February to the Chair of the University Research Ethics Committee (UREC), Professor Peter Bath.

A number of students who took part in the virtual meeting allege that they were misled as to its purpose. Specifically they maintain they were not told by the Facilitator, Professor Gill Valentine, that one outcome of the Review could be the closure of the Archaeology Department. There are also questions over what seems to be the deliberate disposal of notes relating to the Review, which is alleged to be contrary to the University’s retention policy for documents and records.

The referral by the students cited University Research Ethics Policy Note 7 [UREPN 7] adopted in 2009, which states that “administrative research’ should be subject, as research, to what is termed “research ethics review”.

The policy goes on to state that this applies to administrative research undertaken within academic departments, faculties or research centres.

The aim of the policy is to guarantee consistency across all of the University’s activities.

“It should also be a useful contribution to ensuring that whatever inquiries the University makes are of the highest possible quality.”

The crucial passage which appears to bring the Institutional Review of the Archaeology Department within the remit of the Research Ethics Committee is this [our italics],

However, Professor Bath responded by stating the complaint could not be examined by the UREC because the rules applied only to academic research.

The students questioned Professor Bath’s interpretation of UREPN 7 stating in an e-mail seen by the PipeLine,

However, he responded in another e-mail, stating categorically that,

“The Research Ethics Policy does not apply to administrative or management processes within the University, such as the University’s review of the Department of Archaeology.”

In the e-mails seen by thePipeLine, Professor Bath did not offer any alternative pathway to examine the ethics of the Institutional Review.

With no apparent way left to question the conduct of the review, and its research methodology, our source told us,

“…by contorting the UEB [University Executive Board] out of the ethical framework, they’re making me wonder if the UEB is beholden to any ethical guidelines at all?”

Perhaps the University Council will consider the issue of how its administration seems to sit outside of any meaningful ethical framework when it meets on Monday [12 July 2021] to vote on the proposal to close the Archaeology Department and subsume a few areas of strength into other departments of the University in a manner as yet unspecified.

And while on the subject of ethics, journalistic ethics require the use of named sources wherever possible. However, in covering this story University Council might also wish to consider why, such is the lack of trust in the University’s senior management that, all the students thePipeLine has spoken to, and many other sources, have requested to remain anonymous.

Archaeology Department staff have been invited to a meeting with Sheffield’s Vice Chancellor, Professor Koen Lamberts to discuss the outcome of Monday’s meeting of Council, the following afternoon [13 July 2021], with a meeting with students to follow.