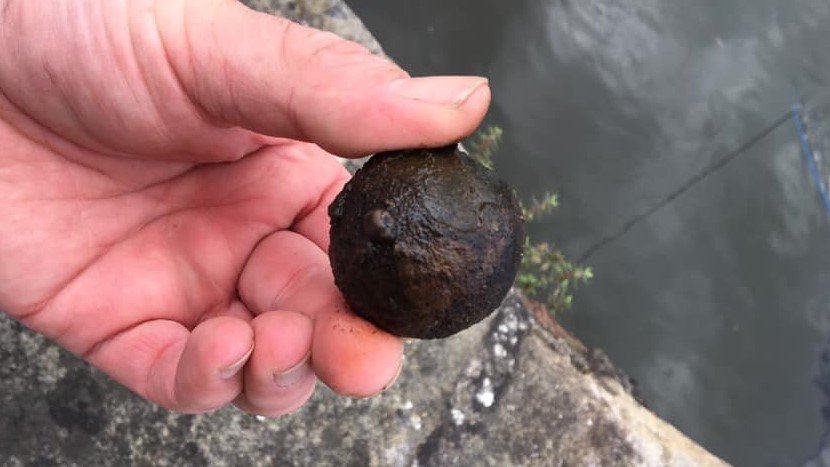 [Lead Image: Public Domain via Facebook used in the public interest for the purpose of reporting news of a potential crime]

thePipeLine has been told that Historic England, Newark and Sherwood District Council and the Police are investigating claims, made on social media, that a cannon ball from one of the famous Civil War sieges of Newark in Nottinghamshire has been recovered from the river Trent by an individual magnet fishing from the tow path in the scheduled area of Newark Castle.

Magnet fishing involves the use of industrial strength magnets, some capable of lifting objects weighing several hundred kilos, which are tied to a line and dipped into bodies of water in an attempt to retrieve metal objects.

While the technique is used legitimately in, for example, the clearance of rubbish from canals, anecdotal evidence from accounts in traditional media outlets and from a number of groups on social media, suggests that the pastime has become increasingly popular among the public, including with would be treasure hunters.

Magnet fishing may be particularly attractive for some as it is much cheaper to get started than traditional metal detecting, with an industrial magnet costing less than a quarter of the price of a high end metal detector and requiring much less skill on the part of the user.

However, like metal detecting, magnet fishing can only be undertaken legally if permission has been obtained from the landowner, or water rights holder and the practice is banned completely on many rivers and waterways.

In the reported incident of magnet fishing at Newark Castle, posts on Facebook, later deleted, showed a male individual holding what appeared to be a piece of round shot with the distinctively patterned castle wall in the background.

The possible cannon shot held up against the distinctively patterned river wall of Newark Castle.
[Public Domain via Facebook used in the public interest for the purpose of reporting news of a potential crime]

The same distinctive cream and brown masonry on the river wall of Newark Castle.
[Cropped from an original image by David Ingham via Wikipaedia CC BY-SA 2.0]

The location shown in that photograph and others published on Facebook in the same post, suggested that the object may have been recovered from the river from a position within the scheduled area of the castle. An action which could be contrary to the Ancient Monuments and Archaeological Areas Act 1979.

However, when asked by another user on Facebook if he was aware that Newark Castle was a scheduled monument and that by recovering the object without permission he might have committed an offence the individual responded,

thePipeLine shared the pictures of the object with two experts in the weapons and artillery of the English Civil War and asked if they could identify the object which the finder had described as looking like a Civil War mini cannon ball.

Both experts, who have asked to remain anonymous for professional reasons, suggested the object is most likely a piece of cannon shot from a gun with a calibre of around three inches.

This would be consistent with a type of field gun called a Falconet, which was used by both sides during the English Civil War, they concluded.

During the Civil War Newark was held for the King and besieged several times between 1643 and its final surrender in 1646, with artillery playing an extensive part in the hostilities.

Another photograph published in the group showed a small pile of what appeared to be metal scrap deposited on the tow path in what appeared to be the scheduled area of the castle. Assuming the individual did not remove the scrap from the site, thus potentially committing theft, this has led to the suggestion that they might also be responsible for the offence of either fly-tipping on land if they left it where it was dumped, or unlawfully dumping rubbish into the river, if they threw it back into the water.

Asked to comment on the allegations Historic England told thePipeLine,

“A possible historic find at Newark Castle was reported yesterday. We are liaising with the District Council and the Heritage Crime Liaison Officer for Nottinghamshire Police about it, so will have further information on this in due course.”

The possibility that a cannon ball was recovered unlawfully comes at a time of rising concern about the phenomenon of magnet fishing.

The Canal and River Trust has banned the practice from waters it controls, citing safety as the reason for the decision.

Indeed, as if to highlight the potential dangers of the practice, on the same day as the accusations regarding the potentially unlawful magnet fishing at Newark Castle emerged [29 July], a large area of the the centre of Leeds was shut down for several hours after Mr Ian Major and his nephew Nathan, who were magnet fishing from the towpath of the River Aire, recovered a suspicious cylindrical object which was thought to be an unexploded bomb dating from World War Two.

An Explosive Ordnance Disposal (EOD) team from the Army attended and the object was identified eventually as an old mooring post.

However, not every incident is a false alarm. In July 2020 Ben Austin and his six year old son Finley pulled a World War Two vintage mortar bomb from the River Mole in Surrey while magnet fishing. The bomb was destroyed by an EOD team using a controlled explosion.

Sadly neither do all incidents involving magnet fishing end safely.

On 16 June 2018 Martin Andrews [42] and his son Jack [19] drowned in the Calder and Hebble Canal, Cooper Bridge, Huddersfield, while magnet fishing.

Mr Andrew’s widow Angela told the inquest that the men had found out about the hobby through the internet and she last saw them early on the morning they died, researching on the internet for a location to spend the day magnet fishing.

“The cause of death was drowning and there is evidence of cannabis use which may have played a part but we don’t know for sure if it was taken that day or a week before.

“It is likely given the devotion to each other one was trying to save the other. And became overwhelmed by the water.

“This harmless pastime does have inherent dangers.”

Given these dangers, and the fact that some people appear also to be prepared to flout heritage protection legislation such as scheduling, in order to go magnet fishing, thePipeLine also asked Historic England what the national heritage body’s position on magnet fishing is?

We have not yet received an answer.