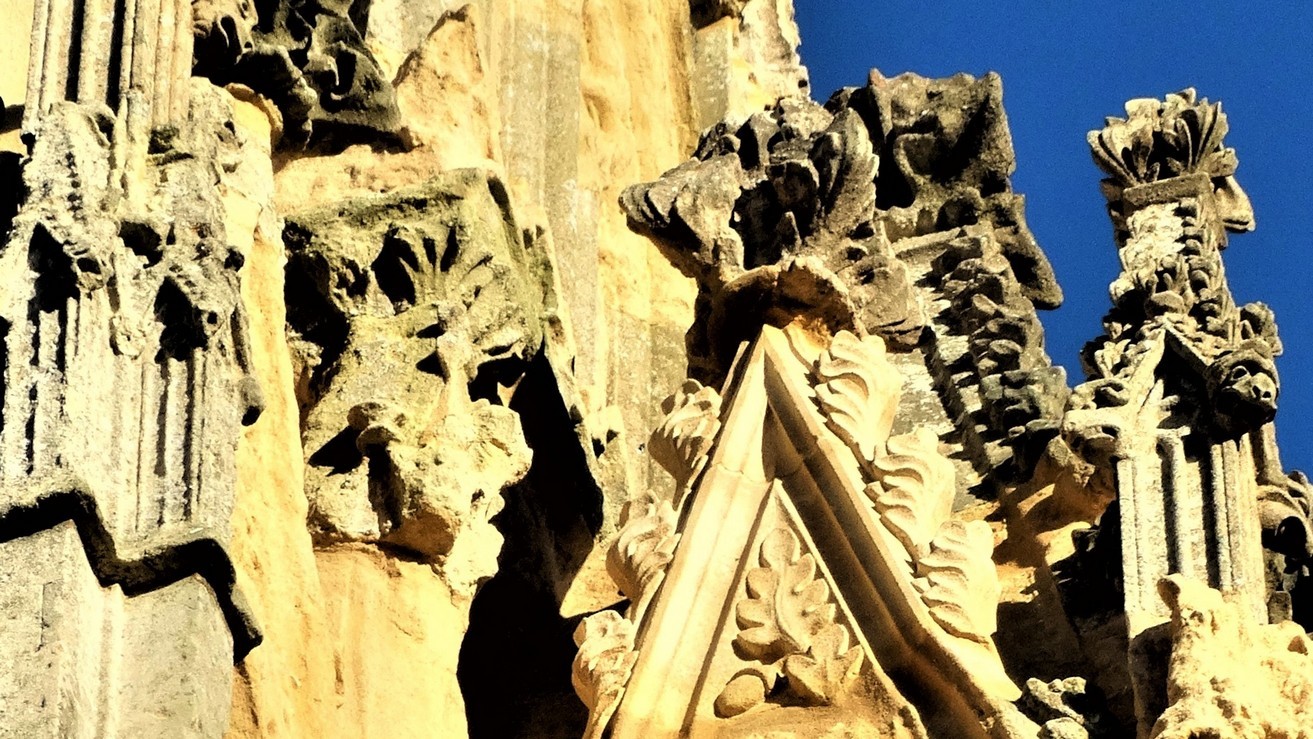 The ninety five thousand pound repair programme for Northampton’s previously neglected Grade 1 listed Eleanor Cross, funded jointly by Historic England and Northampton Borough Council is complete. The scaffolding is down and the newly repaired cross made its debut looking resplendent in the early November sun, no longer shaming the East Midlands council by its presence on the Historic England “Buildings at Risk” register.

Over the summer, hidden by a shroud of scaffolding and hoardings, masons Martin Coward, a veteran of work on York Minster, and Alan Micklethwaite, who has worked at Lincoln Cathedral, have replaced six severely damaged pieces of what is now known to be locally quarried carved Weldon stone with facsimiles, while other members of the skilled workforce from specialist restoration company, the Skillington Workshop have reinstated others of the medieval carvings which were found to be loose, replaced damaged metal pins with high grade marine steel and protected the lime mortar with a, so called, shelter coat mixture of water, lime and milk, colour matched to the original stone.

The Cross has even been subjected to an X-ray fluorescence survey which revealed that, contrary to what some may have expected, the intricate stone carvings and tracery which adorn the structure were never painted.

BBC Radio Northampton breakfast show presenter Annabel Amos concluded a location report from the cross on Tuesday’s programme [26 November 2019] by suggesting that the shame was that many local people did not even know the cross was there. Local historian and campaigner for the cross, Mike Ingram agreed inviting listeners to take the opportunity to stop their cars and walk over to take in the cross properly. Particularly as the memorial to Queen Eleanor, the wife of King Edward I is one of just three similar crosses, of the original twelve, surviving in England, two of which are to be found in Northamptonshire.

However, other campaigners on social media suggested that the real shame was that the urgent repairs to the nationally important Grade 1 listed cross had been required in the first place.

Their disenchantment with Northampton Borough Council’s custodianship of such a significant monument was not helped by the person operating the Northampton Conservative Party’s Facebook account who posted a self congratulatory comment on the Facebook page of the Northampton Chronicle and Echo’s coverage of the unveiling of the cross,

It was soon pointed out that the post failed to mention the campaigners who overcame the months of spin, delays, obfuscations and obstacles which the ruling Conservative group on Northampton Borough Council had placed in the way of the restoration.

These included a protracted and ultimately futile, legal effort to prove that the Borough was not responsible for the cross in the first place and a delay of some eighteen months between the council being notified that there were severe structural problems with the cross which were a potential danger to the public in October 2017 and repairs actually beginning in the early Summer of 2019 [see thePipeLine passim, including here].

“The scaffolding is coming down!! Well done to everyone who fought for the preservation of this wonderful monument into the future especially Mike Ingram and the Battlefield Society”

The campaigners will now be watching closely to ensure that the council follows through on the ten year maintenance programme which is a condition of the Historic England grant.

They will hope too that one day the political will might exist to see the Eleanor Cross fully restored.