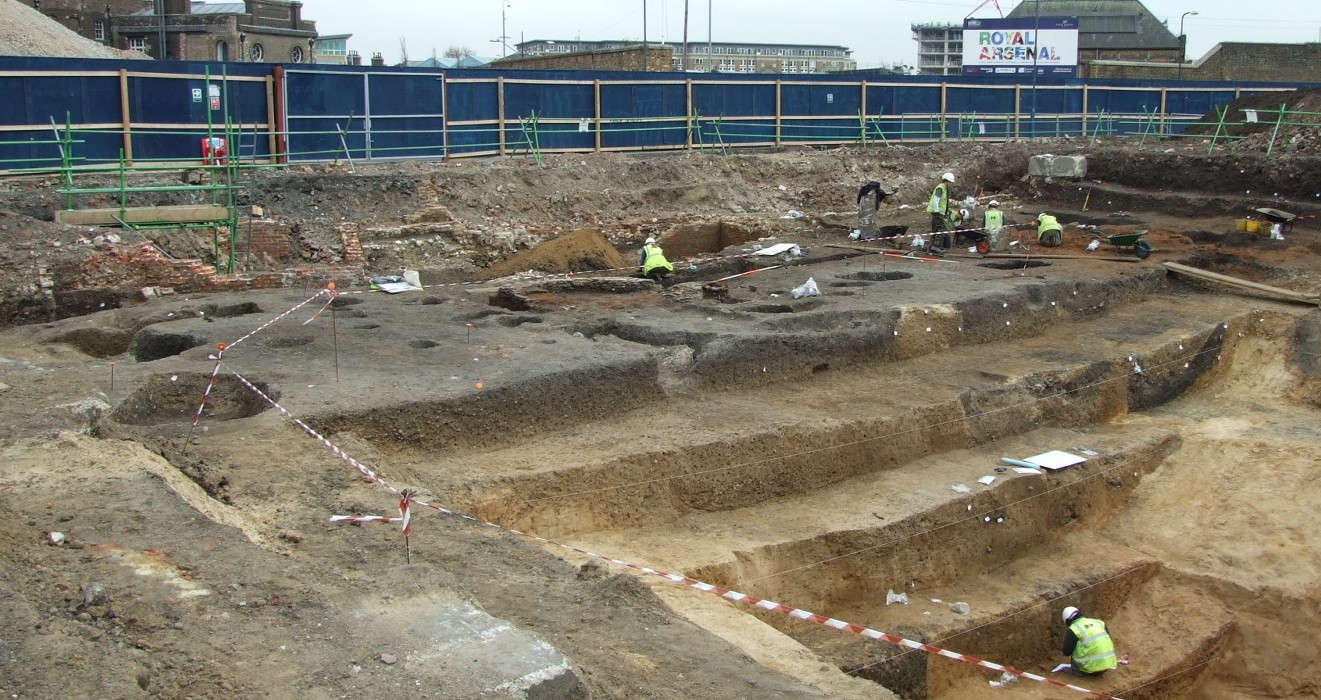 Such has been the drought of good economic news in British archaeology that it is no surprise many in the archaeological social media have been retweeting the report into the economic value of archaeology in the planning process commissioned and published by the Association of Local Government Archaeology Officers, uncritically, with the kind of relish John Mills showed for the glass of cold Carlsberg in the film Ice Cold In Alex.

According to the research, which was undertaken by Landward Research and highlighted on the ALGOA website,

There is a return of £15 for every pound spent on development archaeology.

The development system employs some 5000 archaeologist (74% of the entire profession in the UK).

The report also claims that,

Reducing delays in development projects resulted in an estimated saving of up to £1.3bn to the construction industry in 2017-18 alone.

The provision of Local Authority based archaeological services was worth up to £245m in savings to the taxpayer in 2017-18.

The report also takes aim effectively at a number of allegations made by some politicians and developers, that archaeology leads to increased costs on developers and even contributes to the national shortage of housing.

However, the welcome which the report receives should be tempered by realism on a number of levels.

[IMAGE: ALGOA used for the purpose of reporting and criticism]

The first is that this is clearly a report commissioned for a purpose by a beleaguered sector of the archaeological community; people involved in determining the role of archaeology in planning. A group who are all too often the subject of abuse by the more willfully ignorant, or knowingly cynical, politicians and developers.

Starting with the infamous 2011 “bunnygate” row in Fenland, the media archives are littered with stories about local authorities abandoning their own responsibility for archaeology and heritage in an effort to save, usually not very much, money. Efforts which are usually justified as an understandable attempt to reduce the impact of cuts on other front line services which would attract greater criticism from the media and voters, or, occasionally, as an ideological move to “cut red tape”.

That is not to say that the report is not important, but ALGAO quite properly has an agenda to protect and promote the role of its members and the conclusions of the report and the way they are framed, should be read in that light.

More importantly the data will be attacked for precisely that reason by opponents of the current development control system, and particularly by those who might wish to row back on the current regime in the event European Union environmental provisions cease to apply in the UK.

In that climate the international commitments regarding the treatment of the historic environment entered into by previous UK Governments, such as the Valetta convention cited by the report as a line of defence for the status quo, are fragile. Particularly so given the current quasi Libertarian free market stance of the high command of the Conservative Party and those who influence and fund it.

If you doubt that look only across the Atlantic to the United States and note the way the Trump administration has first sidelined and then hollowed out both environmental regulations and then the Environmental Protection Agency which enforces them.

It is also the case the various data sets used by the report authors are flawed in various ways. Something which the report quite properly acknowledges in the extended section on methodology which is, in many ways, the most interesting part of the report.

In particular the authors acknowledge there is no comprehensive data set using common definitions and questions which the report authors could draw on.

Instead the report is the result of a carefully nuanced and weighted combination of published data from various sources across England, Scotland and Wales, and questionnaires submitted by the researchers asking questions which there was no obligation on those receiving the questionnaire to answer.

For example the report describes how data on planning applications for England was anonimised meaning that the authors could not tell which local authorities had or had not answered the survey questions.

Of course this is fine if there is a broad similarity too in the type of local authority concerned. However, if, for example, largely rural, or largely urban, authorities failed to respond in a disproportionate way the numbers the team had to work with could be skewed in either direction to a greater or lesser extent.

Certainly there is a margin for error in the conclusions which is not made clear in the reporting of the headline figures alone.

The report also acknowledges other regional variations in the availability of data this time making true comparisons and between practice and value across England and the devolved administrations of Wales, and Scotland a trickier proposition, requiring the authors to make further assumptions about numbers and weighting samples in various ways.

This perfectly legitimate methodological engineering is also submerged under the headline figures published in the report.

In this connection, in spite of the 2007 Amey Lagan road contract in Northern Ireland being cited as a case of what can go wrong when systemic failures in the treatment of archaeology in the planning system result in increased costs, in that case £17.33 million, Northern Ireland is not included in the overall conclusions of the report.

Looked at objectively the report also asks a number of implicit questions impacting on the wider archaeological community.

The most obvious of these is that, in essence, this is a report providing a justification for commercial developer funded archaeology as an economic “good”. A provision of arguments ALGAO members can take to their employers and which people and organisations lobbying for the wider archaeological community can take to Government. To that end the data is almost entirely about the contribution of commercial contracting units to the economy because that provides figures that even the most hard of thinking, ideological politician might understand.

So far so good. Lobbying is effective when the arguments put chime with the political priorities of those who are being lobbied.

As the figures show, but is not made clear in the commentary, contracting units only represent just under three quarters of the archaeologists employed professionally in the UK. There is nothing here about the value to the economy of, for example, archaeology in the University or Museum sectors, in public archaeology, or of those sectors working in conjunction with developer funded projects.

This perception is emphasised by the fact that buried in the report is the statistic that approximately 8.5% [£21 million] of the economic contribution of archaeology to the economy actually comes from research, Heritage Lottery Fund and community projects.

To look at the benefits of archaeology to the wider economy without factoring in the work of one quarter of UK archaeologists and projects with as yet almost unquantified economic and social impacts is only to tell a part of the story and not to make this explicit is unfortunate.

Indeed, if only because of those striking headline figures, there will be a concern among some outside of development archaeology that this report will be presented as being about the entirety of UK Archaeology.

The report is not so all encompassing, and again to be fair it is not presented explicitly as such, but the danger is it might be used in a distorted one size fits all manner.

With the community role in mind, it is also necessary to place the report in the context of discussions about whether development archaeology has a negative impact on some communities by becoming too permissive a part of a virtuous circle of development.

While in archaeological circles this discussion began with the introduction of PPG16 almost thirty years ago the argument was made more potent, and arguably more divisive, when the Cameron government introduced the National Planning Policy Framework [NPPF] with its presumption in favour of what the government termed “sustainable development”.

It is an argument which has become increasingly bitter with a roll call of disputes dividing even the house of archaeology.

For example, the ongoing controversies relating to the dual carriageways and Tunnel on the A303 in the Stonehenge World Heritage Site, the threat to the landscape of Old Oswestry hill fort, and the south Goodwin Sands dredging licence either have, or almost certainly will, end up in the courts, with archaeologists taking the stand as expert witnesses on both sides of the argument.

Meanwhile the recent planning consent for irreversible damage to the registered battlefield of Bosworth, which saw Historic England explicitly and some of the work of the University of Leicester Archaeology Service implicitly, ranged against independent battlefield archaeology experts never even got as far as the courts, so financially and politically outgunned were the opponents of the Horiba Mira development scheme.

In all these cases while commercial units have banked the legitimate proceeds of development related contracts, others in the same profession, and who might even be members of the same professional organisations, signed up to observe the same codes of ethics, have argued that these developments are deeply and permanently damaging to the historic environment.

In such cases it is worth adapting the genuine argument of the fictional Dr Ian Malcolm in Jurassic Park,

“Your archaeologists were so preoccupied with whether or not they could, they didn’t stop to think if they should.”

In other words. While a welcome boost to the hard working and it must be said long suffering members of the profession working in commercial archaeology and the planning system, the Archaeology in Development Management report only tells that part of the story of the contribution of archaeology to the communities and economies of the UK.

Even then the admitted problems with the data sets mean it can only be an opening chapter.

In particular, while difficult questions such as whether archaeologists can engage ethically with all planning applications, or whether some should be beyond the pale, are beyond the scope of the report, the figures and the politics and power dynamics of the planning environment which gave rise to them, make such questions inevitable and ongoing.

All that said, there is one further telling statistic contained in the ALGAO report. Planning Archaeology employs more people than Tax Consultancy.

Readers can draw their own conclusions about the economic benefits and consequences of that.