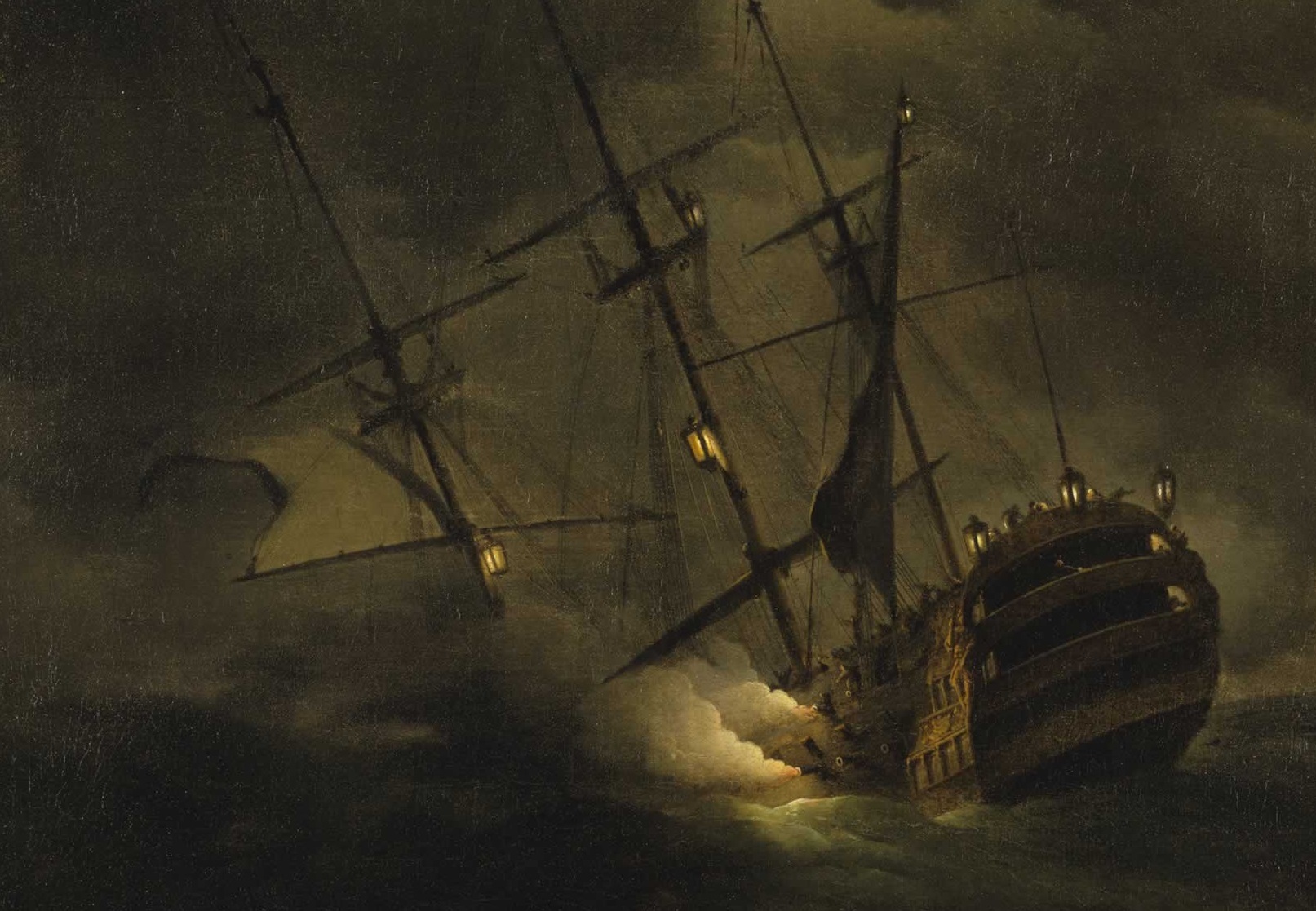 The UK marine regulator, the Marine Management Organisation [MMO], has told the Maritime Heritage Foundation, manager of the wreck site of the one hundred gun ship of the line HMS Victory, that the UK Government has decided that the charity will not be given permission to salvage the flagship of naval hero Admiral Sir John Balchen.  The decision was communicated to the Maritime Heritage Foundation’s archaeological consultant Dr Sean Kingsley, in an e-mail letter dated 5 September 2018 which was subsequently released on the Marine Management Organisation’s website.

The e-mail letter states that the MMO were advised on 22 August 2018 that the Ministry of Defence (MOD), in conjunction with the Department of Digital, Culture, Media and Sport (DCMS) had reached the decision that the wreck site of HMS Victory, which was lost with all hands in a violent storm on  4 October 1744 and all of the artifacts associated with it, including HMS Victory’s battery of bronze cannon, will be preserved in situ, in accordance with the UK’s declared policy towards historic wrecks under the Annex to the UNESCO Convention on the Protection of the Underwater Cultural Heritage.

The letter ends with the recommendation of the MMO that the Maritime Heritage Foundation withdraw its current marine licence application to salvage the wreck.

The crucial paragraphs from the MMO’s e-mail letter to the Maritime Heritage Foundation finally denying permission to work on HMS Victory 1744 and confirming the wreck will be preserved in situ.
[Public Domain via the Marine Management Organisation]

The letter confirms that the MOD and the Department for Digital, Culture, Media and Sport have concluded that,

a position which is contrary to claims made by Odyssey and the Maritime Heritage Foundation, and that,

Dr Kingsley and Odyssey are leading proponents of the theory that maritime heritage is at severe risk from bottom trawling methods such as scallop dredging and that the depredations of these “bulldozers of the deep” mean that the recovery of important wrecks is a matter of urgency.

This runs contrary to the policy of most mainstream archaeologists and archaeological bodies who argue that the threat from trawling can be overstated and who seek to find methods for the preservation and management of archaeological sites in situ as the first choice means of dealing with maritime cultural heritage of all kinds.  This policy is set out in detail in the 2001 UNESCO Convention on the Protection of the Underwater Cultural Heritage.

It is reported that while at the 2018 Shipwreck conference in Plymouth Dr Kingsley was asked by delegates to provide images of trawl damage on the HMS victory wreck site, but was not able to do so.  It has also been pointed out by some fishermen that it is not in their interest to trawl across wreck sites as they are often the breeding grounds for fish and represent a risk to expensive fishing gear.  In 2012 Barrie Deas, chief executive of the National Federation of Fishermen’s Organisations, told the Independent newspaper that modern GPS and other technological aids to navigation made it easier than ever to avoid wrecks adding,

“Protecting shipwrecks for historical and aesthetic reasons is a concern shared in the fishing industry as well.”

Meanwhile, in November 2011 it was alleged that a Dutch salvage company had removed cannon from the site unlawfully and a cannon was indeed seized by the Dutch authorities and ultimately returned to the UK.  Odyssey and the MHF used this incident to claim that the site was at risk from looters.

However the letter suggests that this argument has not convinced the MoD or DCMS either, as the decision also states that,

This last statement gives force to repeated statements made by ministers to Parliament that the UNESCO Annex represents the UK Government’s policy towards historic shipwrecks and would appear to finally put to bed the accusations, emanating from some parts of the archaeological community, that the UK was one of the last remaining soft touches for treasure hunters seeking to exploit historic wrecks for commercial gain.

The MHF has been given 90 days from the date of the letter, 5 September 2018, to withdraw the application voluntarily.  Otherwise the application will be rejected formally.

The decision of the two Whitehall Departments to turn down the Maritime Heritage Foundation’s application almost certainly marks the beginning of the endgame in one of the UK’s longest running archaeological controversies.

The wreck site of HMS Victory was first located by Florida based treasure hunting company Odyssey Marine Exploration in 2007 apparently by accident, and the Maritime Heritage Foundation was created to manage the wreck in the Autumn of 2010, under the chairmanship of Sir Robert Balchin, Lord Lingfield, a senior Conservative Peer and advisor to David Cameron and Michael Gove.

Lord Lingfield was at one time presented as a descendant of Admiral Balchen and he referred to the Admiral as his forebear in a 2010 submission to the Department for Culture Media and Sport.  However, genealogical research made public by the actual descendants of Admiral Balchen through his daughter, showed that this impression was erroneous.

In fact a number of Admiral Balchen’s actual descendants, principally the West family, opposed Odyssey’s involvement publicly, including in a letter to the Times, and in particular they were concerned by claims made by senior Odyssey personnel in the United State, at investors fairs and in television interviews, that Odyssey would monetize the cargo of treasure which the company claimed to have been on board the ship to the tune of some $250 million, seeing that as a desecration of the grave of the Admiral and the hundreds of Royal Navy sailors who were lost with the ship.

A slide from an Odyssey Marine Exploration presentation to investors showing the intention to “monetise” the cargo alleged to have been aboard HMS Victory when she was lost, contrary to British Government Policy under the UNESCO Convention.

[Odyssey Marine Exploration:  Fair Use for the purpose of Reporting News]

In fact no independent authority, including the British Government, accepts Odyssey’s figures, or even that there ever was a substantial cargo of gold or silver aboard the Victory.

Nonetheless, in January 2012 the Ministry of Defence granted the management of the wreck site to the MHF through the mechanism of a Deed of Gift.

At the same time Odyssey announced it had held a commercial salvage contract for the wreck site granted by the Maritime Heritage Foundation, leading to fears among many archaeologists that there would be no legal bar to the sale of any artifact from the wreck which could not be proven to belong to the British Government.

There were also accusations that the charity was effectively acting as a front for Odyssey and documents released under the Freedom of Information Act showed clearly that civil servants in the DCMS warned then culture secretary Jeremy Hunt that Lord Lingfield was close to Odyssey and that supporting the commercially driven proposals regarding the wreck site would cause problems in the Government’s relations with the archaeological community and even over certain aspects of foreign relations.

At the time Odyssey was engaged in a long running legal case in the United States whereby the Spanish Government had accused the company of salvaging illegally seventeen tons of silver from the Spanish frigate Nuestra Senora de las Mercedes.  A case which the Spanish won amid very strong criticism of Odyssey’s management and methods by the presiding judge.

The Florida based company also ran into legal problems over the HMS Victory wreck site.

As a consequence the company received an official written warning in lieu of prosecution.

In spite of this evidence of at best poor oversight and at worst collusion in unlawful activity on the part of the Maritime Heritage Foundation’s management, in the Autumn of 2014 the then Defense Secretary, Michael Fallon MP, another political associate of Lord Lingfield, gave permission for the Maritime Heritage Foundation to recover what were described as “at risk surface items” including cannon, from the HMS Victory wreck site.  However, Mr Fallon was forced to rescind the permission the following March in the face of a pre-action letter threatening the Ministry of Defence with a Judicial Review of the decision to allow the recovery, issued in the name of Mr Robert Yorke, the chair of the Joint Nautical Archaeology Policy Committee [JNAPC].

The JNAPC, which is made up of independent experts and the representatives of organisations active in UK maritime archaeology,  had waged a dogged campaign to try to persuade the UK Government to listen to its professional legal and archaeological advisers when they warned of what were claimed to be the numerous pitfalls in allowing the commercial salvage of HMS Victory, contrary to the UNESCO Annex.

It is also believed that in spite of repeated claims that the site is threatened, neither Odyssey, nor the Maritime Heritage Foundation, have carried out any significant work on the HMS Victory wreck site since work was halted in 2012 and the Maritime Heritage Foundation has made no known attempt to raise the several million pounds required to undertake even a basic archaeological study of the wreck site.

The most recent accounts released by the Maritime Heritage Foundation, covering the year to 31 March 2017, revealed that Lord Lingfield’s charity had received no income during that period, had just under forty two thousand pounds in the bank and undertook no significant charitable activities, although it had purchased a coat of arms.

Responding to the decision to ask the Maritime Heritage Foundation to withdraw its application to work on HMS Victory 1744 and to preserve the ship and her contents in situ spokesperson for the joint Nautical Archaeology Policy Committee told thePipeLine,

“The JNAPC entirely supports the decision made by the Ministry of Defence and the Department for Digital, Culture, Media and Sport”

The Maritime Heritage Foundation, Odyssey Marine Exploration and Dr Sean Kingsley have been approached for comment.

17-9-2018:  Image of the MMO letter updated to include logo and header to verify authenticity.

This story will be updated as we receive more reaction.