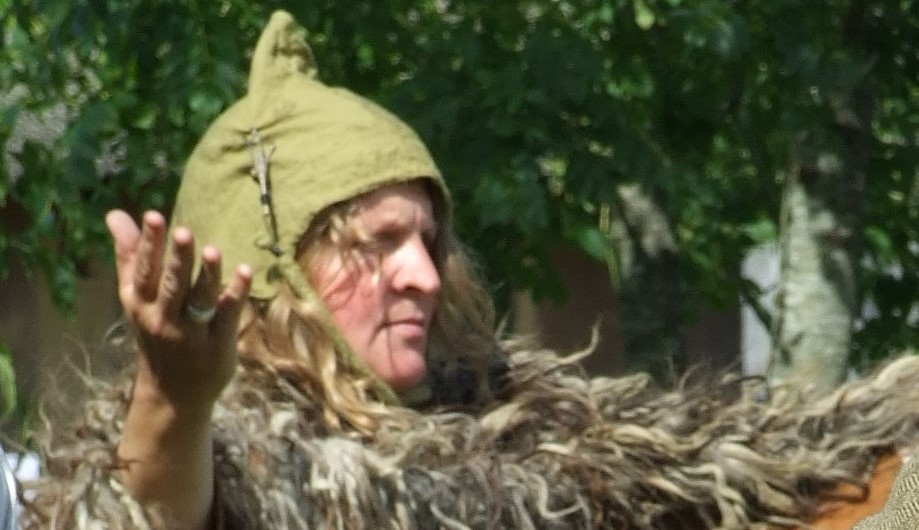 Undercover Photography:  An alleged senior official of the Chartered Institute for Archaeologists [CIfA] summons the genius loci during the 2018 “Ceremony of the Trowels.”

According to archaeological folklore, on Mid-Winter eve 1935, world famous archaeologist Sir Mortimer Wheeler, the inventor of Lay Lines Alfred Watkins and occultist, secret agent and self styled “Beast 666” Aleister Crowley came together on the summit of Maiden Castle in Dorset under the auspices of the Society of Antiquaries of London and the Dorset Field Club.  According to Wheelers diaries, their intention was to undertake an esoteric experiment invoking the Genius Loci [the spirit of the place] to summon the ghosts of archaeology past, and to attempt to predict the archaeological future by the casting of archaeological tools on the ground in the manner an ancient Druid would cast the entrails of a slaughtered chicken upon an alter.  However, what happened next is a matter for conjecture.

Aleister Crowley is reported to have recruited a coven of comely local Wiccans to take part in the experiment leading to gossip in senior common rooms across UK Academia which alleged that, at least in the case of Sir Mortimer and Mr Crowley, a further motive behind the event was to burnish their reputation as gentlemen and players by attempting to sexually harass any female with a pulse, preferably, although in the case of Mr Crowley not exclusively, human.

Meanwhile, mysterious fires seen on the summit of Maiden Castle and reports of local children being chased away from the scene by shotgun wielding site workers with dogs, further fueled the local rumour mill.

It was even reported in a Dorchester parish magazine that spectral figures had been seen performing bizarre, Eldridge Pope fueled rituals at midnight in front of a life size effigy of Sir Flinders Petrie, naked except for a Pith helmet and covered in golden bat guano, as he had first appeared to shocked visitors to his excavations at the tombs of Giza.

It is this atmosphere of occult mystery and tabloid scandal surrounding what became known as “The Casting of the Trowels” which may explain why nobody in UK archaeology will now admit that the ceremony even took place.

Indeed, a highly placed source also told thePipeLine that, so sensitive were the archaeological establishment to what had taken place at Maiden Castle, Wheeler’s written report of the event was peer reviewed by a special secret sub-committee of the Society of Antiquaries and the only copy of the paper is now kept in a special safe at Burlington House, for fear that the open access publication of the contents could bring down the entire edifice of UK Archaeology.

It is also understood that the Police and Special Branch files relating to the case appear to have been removed from the National Archive for reasons unknown and were then subsequently “lost” by the Home Office.

However, there are persistent reports that the Chief Constable of Dorset was summoned to a high level meeting in Whitehall in early January 1936 and that subsequently the families of a number of domestic and waiting staff who had been working in hotels and tea rooms in the Dorchester area were suddenly able to afford a new indoor bathroom.

It is against this background of archaeological mystery, conspiracy and fantasy worthy of a prime time History Channel documentary that thePipeLine discovered that, far from being suppressed in 1935, the Ceremony of the Trowels has actually been repeated every year in utmost secrecy by the most senior reaches of the archaeological profession in Britain, with only a brief hiatus in 1941 when Aleister Crowley was recruiting witches to curse Hitler for the war effort and Brigadier Mortimer Wheeler was pursuing his campaigns overseas with the Royal Artillery.

Following a tip off from a highly placed source in the Antic’s we were first able to report the proceedings in Old Mort’s Archaeological Almanack of 2015.  That year, and at each subsequent Midwinter solstice, thePipeLine has managed to breach the wall of secrecy surrounding the ceremony and reported how the great and the good of UK archaeology have wrestled with the task of predicting the future of an increasingly embattled and precarious profession.

This year, [2017] in order to honour the last ever series of Mackenzie Crook’s hit BBC4 television series “Detectorists” and to mark the contribution made by tens of thousands of “citizen archaeologists” [™Department for Digital Culture Media and Sport], who hunt for history with metal detectors [and who only occasionally sell what they find on E bay], the ceremony included for the first time the committee of the National Council for Metal Detecting and the predictions were related primarily to one of Britain’s most popular and sometimes lucrative, hobbies.

The ceremony itself took place during a metal detecting rally somewhere in the South East of England, on a permission kindly offered for free by a landowner in return for 50% of the market value of all Treasure finds and a facility fee paid in cash.

For security reasons participants were only informed of the precise location of the rally by SMS text, shortly before the event commenced, but our reporter was able to follow the live updates on Twitter and You Tube.

Hundreds of detectorists attending the rally, looked on in awe as the great ceremonial barbecue was lit and a libation of real ale was poured at the four points of the compass, by a skyclad delegation, made up of officers of the Portable Antiquities Scheme, the Chartered Institute for Archaeologists and the National Council for Metal Detecting.

In keeping with the joint nature of this years ceremony the chosen guest beer was “The Hoard” brewed by the Backyard Brewhouse of Lichfield in commemoration of the discovery, and eventual declaration to the authorities, of the remarkable Staffordshire Hoard.

The ceremony proper began then with the haunting chant of the names of the original members of the “Time Team” filling the air and the parading of the symbol of the power of the National Council for Metal Detecting, the mighty Minelab Dreadnought Hoard Hunter metal detector, resplendent in the freshly painted livery of the event sponsor, the Portable Antiquities Scheme.

As snow began to fall the actual instruments for the ceremony of the casting of the trowels were then driven into the sacred circle aboard a World War Two Covenantor tank dug up for larks and TV ratings from a Surrey vineyard.  On top of the tank was Madness frontman Suggs.

For this years “Casting of the Trowels” The National Council for Metal Detecting deployed the organisation’s mighty ceremonial Minelab Dreadnought Hoardhunter, sponsored by the Portable Antiquities Scheme.
[Image:  Public Domain via Wikipaedia]

His career rejuvenated by his role as lead presenter for the metal detecting series which had uncovered the tank, “World War Two Treasure Hunters”, and taking advantage of the Government’s desire to defer less to traditional “experts”, Suggs told our undercover reporter that he was “dead chuffed” to attend in his new role as Chief Executive of Historic England.

It fell to Suggs to open proceedings by shouting the ritual challenge,

“In the name of Andy, Lance and sacred Bec’s who are the experts now?”

and throwing down the ritual divining trowels.

As they struck the plough soil the sky was riven with lightning and the air filled with the smell of sulphur, and burnt catering pack burger, as the barbecue overturned.

Then a mighty swirl of wind whipped across the field twisting the snow into pulsing sheets which took on the shape of two magical Magpies [Pica pica], which alighted on an oak tree above the assembled watchers and chirruped their message.

Curiously the Magpies vocalised at exactly the same frequency as a metal detector set to discriminate against iron artifacts and ring pulls.

And as the Magpies spoke in tongues this is what the archaeologists present heard.

“We are time travelers, and there is nowhere we can tread in Britain which hasn’t already been trodden by Bronze Age smiths and Iron Age Druids, by Romans, Saxons, and Medieval pilgrims, by Civil War pikemen and musketeers, Georgian ladies and Victorian farmers and they all left marks in the landscape which, if we can gather all the evidence, we can learn to read, to understand and to share.”

“All metal detectorists will learn to observe every the stipulation of the NCMD Code of Conduct at all times [even the bit about only digging a small neat hole].”

“And all finds will be reported to at least eight figures OSNG accuracy because that is the responsible thing to do if you want to really learn about what the distribution of objects tells us about the past.  And no-one will ever not report something because they are worried a permission might get scheduled and thus become out of bounds to detectorists.”

“And because they are responsible, no metal detectorist will ever excavate a complete hoard without calling first the Finds Liason Officer and waiting for proper archaeological supervision.”

“Above all no metal detectorist will ever recover deliberately a piece of live ammunition or ordnance, not even for a television programme, because as well as being illegal and against the NCMD code, it is bloody stupid thing to do unless you want a Darwin Award.”

And this is what the metal detectorists heard,

“We are time travelers because there is nowhere we can tread in Britain which hasn’t already been trodden by Bronze Age smiths and Iron Age Druids, by Romans, Saxons, and Medieval pilgrims, by Civil War pikemen and musketeers, by Georgian ladies and Victorian farmers and they all dropped metal memories for us to find.”

“Historic England will produce a new set of business friendly guidelines for archaeological geophysics in which red tape and business costs will be reduced by allowing developers to discharge planning conditions by employing metal detecting clubs to undertake geophysical surveys.  After all, what is metal detecting except a true people’s archaeology and a form of geofizz?”

“And the first to take advantage of the new rules will be Transport Secretary Chris Greyling who will hire metal detectorists to survey the route of the A303 Stonehenge Short Tunnel.  This will thoroughly hack off UNESCO, but English Heritage won’t mind so long as everyone pays to use the car park.”

“And where once there was European funding and freedom of movement for students and academics, there will instead be freedom of movement for metal detectorists and funding from the sale of artifacts on E bay [other retail platforms are available], because the great unifying idea which is the voluntary Portable Antiquities Scheme will stretch from the Atlantic coast of Ireland to the steppes of Russia so that the past will truly belong to the people and not the academic elite.”

“And lots of the rallies will be held to raise money for charity, [once reasonable expenses have been deducted and excluding the value of treasure finds which shall go to the landowner and finder], so that is all right.”

“And meanwhile the end of the working time directive shall lead to commercial archaeologists being forced to work all the hours an employer requires- or else, including at night, but don’t worry about that either.

Some metal detectorists have been working at night for years.  All you need is a surplus DPM combat jacket and a ski mask to keep you warm.”

And the most magical part of the Magpie’s magic was that everyone listening, archaeologist, PAS officer, land owner and detectorist, only heard what they wanted to hear.