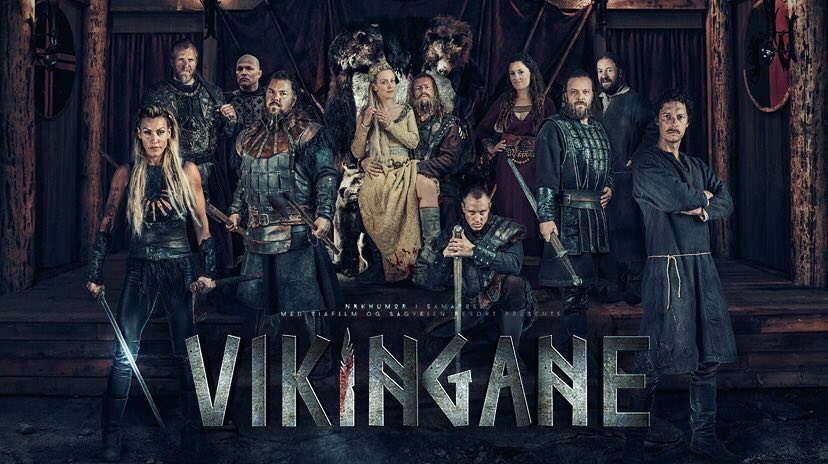 Sex, Violence, Art and great hair, on display in Norsemen [aka Vikingane].  [Via Film/NRK-Fair Use]

Andy Brockman takes a look at a new historical sitcom from Norway, Norsemen.

Anyone familiar with the current vogue for Scandi’ Noir drama and the associated lifestyle choices, Hugge and Lagom, will know that a common theme among writers and programme makers is the the conflict between modern civilization and the primal physical and mental Scandinavian landscapes of mountain, lake, forest and fjord.  Fans of Jo Nesbo’s Harry Hole, Sarah Lund, Martin Beck and Kurt Wallander, will also know that there is another strand of Scandinavian culture that is common to many of these tales.  That is a bone dry, and often midwinter dark, sense of humour.  When it comes to depictions of the Viking period in literature and film those traits are  present certainly in the seminal 20th century novel set in the Viking period  The Longships by Frans Gunnar Bengtsson [original title  Röde Orm].  The new series Norsemen, made by Viafilm for NRK, the Norwegian Broadcasting Corporation, and now available on Netflix, picks up the baton carried by Orm, the anti hero of that Swedish classic, and runs with it, with tremendous humour and a visual style.  Indeed, the series boasts production values worthy of that other series which mixes a big budget look with violence and black humour;  a certain family saga set on Westeros, Game of Thrones.

Indeed, for a UK audience brought up on sitcoms set in the past and shot in the studio, like Dad’s Army, Blackadder [from series 2 onwards] and the long forgotten, except by connoisseurs, Chelmsford 123, the first thing which is noticeable about the inhabitants of the village of Norheim is that they do not live in sets which wobble.  Instead they live in a real life Viking village in the great outdoors of western Norway complete with hall, boats and even neighbours.  That is no surprise as the series is shot in and around the replica Viking age buildings of the Nordvegen historiesenter at Avaldsnes.

The next thing that an audience used to the subtitled BBC4 style of presenting foreign programmes will notice is that Norsemen is being shown by Netflix in an undubbed version in English.

In fact the co creators of the series, Jonas Torgerson and Jon Ivar Helgaker made a conscious decision to shoot every scene twice.  Once in their native Norwegian for the domestic showing and then using the same actors speaking in English for the international market.  The choice was a pragmatic one, as producer Anders Tangen, who was also the man behind the Norway set, international hit Lilyhammer, told the media,

“Broadcasters can choose the English or Norwegian version, it allows us to bypass the remake option, plus Norwegian actors who speak fluently English can use this as a calling card to boost their international career.”

Among the comedic and historical, set pieces, plucked from the headlines of the latest saga, which the cast are called upon to perform are are a holmgang, trial by combat, where an attempt to cheat ends about as well as as a certain similar encounter with the Mountain at Kings Landing and a raid on England which interrupts a fundraiser for a new children’s hospital [I told you the humour could be dark].  While you will never watch the flaming send off of a Viking chieftain, like that which Hollywood gave Kirk Douglas in The Vikings, in the same way again after watching the depiction of a similar fiery funeral in Norsemen.

In what must be a first for television, there is also really good joke based on the potential of runesticks to take on the role of political and sexual graffiti on a toilet wall, when there isn’t a toilet wall to graffiti on.  And yes, some of the humour is based on the graphic and very funny, depiction of bodily functions.

There is even a homage to a certain heritage based joke in the legendary This is Spinal Tap. and you will also discover how many slaves you need to sacrifice to Odin in order to bring a raiding party safely home.

Spoiler alert:  it is two.

Norsemen may be set in the year 790, and it looks the part, with a level of period detail which could make the most hardened living history authenticity officer smile, [rather than choke on the mead and salted herring, the reaction induced by the BBC’s The Last Kingdom set during the same era].  But in the end, like all the best comedy and drama which is set in the past, from Shakespeare to Dad’s Army and the Life of Brian, the series actually tells us more about the absurdities and paranoia’s of the lives we live today.  A point which is made explicitly and hilariously, when captured and enslaved Roman actor Rufus is appointed “Creative Director” of Norheim, on the grounds that, with all that raping and pillaging and feasting, the Vikings have overlooked the potential for the arts and culture to enrich the community.

It is a deliciously knowing  send up of the pretensions of the very lifestyle books which have made contemporary Scandinavian culture, like Norsemen, so popular in the first place.

Series One of Norsemen is available currently on Netflix