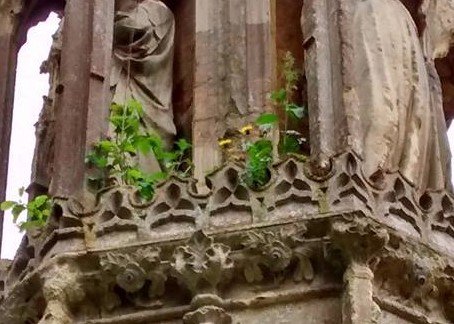 Speaking on BBC Radio Northampton’s Breakfast Show, Councillor Tim Hadland, Northampton Borough Council cabinet member for regeneration, enterprise and planning, has confirmed that the Council is to seek Scheduled Monument Consent for urgent repairs to the nationally important Northampton Eleanor Cross.  However, campaigners working to see the monument conserved are concerned that Councillor did not set out a timetable for the repairs.  There is also concern at the implication in some of Councillor Hadland’s comments that the Council is seeking to offload responsibility for maintaining the monument to a new owner, on the grounds that the Cross is a national monument yet local Council Tax payers in Northampton are being asked to pick up the cost of repairs and maintenance.

In an interview with the BBC’s Stuart Linnell broadcast on 17 May [2017], Councillor Hadland told the Breakfast Show host that the Council had been in consultations with heritage regulator Historic England over the type of repairs required and was in the process of making an application for scheduled monument consent from the Department for Culture Media and Sport.  This is a legal requirement before undertaking any work on a scheduled monument.  He also stated that the Borough had sought costings from specialist contractors.

However, in the same interview Councillor Hadland was forced to deny that the Council had been too slow to act when told of the deterioration of the monument to Edward the First’s Queen, Eleanor of Castile, telling Mr Linnel,

“We haven’t prevaricated.  The important thing is we have picked up the challenge.  We have debated it, because we have to do that with public money.”

Councillor Hadland also reiterated the position published in a Council press release dated the previous day, 16 May [2017], which stated,

“We are keen to ensure that this work is carried out in the right way and as soon as practicable.

“The Eleanor Cross is a very important part of Northampton’s heritage and it is essential that we get this work right, which is why anything we do will be governed by a tight brief from Historic England and assessed thoroughly by expert conservators before being done.

“I’m sure the last thing anyone wants is for us to rush into anything, however good the intention, and end up doing more damage than we aim to prevent with this maintenance work.”

However, while appearing to take on the immediate responsibility for maintenance,  Councillor Hadland’s comments to the BBC added to the ongoing confusion over who actually owns the cross.  In the course of the interview Councillor Hadland also told Stuart Linnell,

“As far as I am concerned it is owned by the people of Northampton.  Working out who’s responsible for repairing.  It is an ongoing issue.”

When the controversy first broke in April [2017] the Council claimed that it was not responsible for repairs to the Eleanor Cross because the County Council was the actual owner of the Cross.  This claim was met by a barrage of scepticism on Social Media when a series of Northmpton Borough Council and other documents were published all listing the Eleanor Cross as a Northampton Borough Council asset.  The Council then appeared to buckle under the public pressure of the revelations, which were carried as a series of lead stories on Mr Linnell’s programme and announced that it would undertake repairs.  However, to critics of the Council it appears from Councillor Hadland’s comments that the Council still harbours hopes that it can offload responsibility for maintaining the monument.

In the course of his interview Councillor Hadland appeared to suggest to Stuart Linnell that at the root of the Borough Council’s apparent reluctance to take responsibility for the monument was that the Council felt it was unfair that it was required to pick up the tab for a national monument.   After telling Mr Linnell  that the Council would have to try to find the money required for the repairs because there was no specific budget for the work, Councillor Hadland added,

“This is a national monument of national importance and it is down to local people to pick up the bill for it.”

While Northamptonshire’s second surviving Eleanor Cross at Geddington is owned by English Heritage, heritage experts point out that, were English Heritage, or another body, to accept Councillor Hadland’s point and take over responsibility for maintaining the Northampton Cross, let alone take full ownership of it,  the move would set a precedent for any landowner with a heritage monument on any form of national register on their property to expect similar treatment.  Spun off from Government as an independent charity in 2015 and with a commitment to become self funding by 2022/2023, English Heritage is thought unlikely to want to take on a monument which would be costly to maintain and from which it can derive no income.

It is also pointed out that the line of argument deployed by Councillor Hadland is dangerously close to that used by the Council under previous leader, and now former MP for Northampton South, David Mackintosh, as one justification for the sale of the internationally important statue of Sekhemka from Northampton Museum.  It was argued by the Council that an Egyptian statue, however important culturally, was not relevant to local people.  At the time the Council was focusing its heritage offer on the famous Northampton boot and shoe industry almost exclusively.  Councillor Hadland was a senior member of the Council’s ruling Conservative Group at the time of the Sekhemka sale and remained so at the time £10.25 million of public money was loaned to the then owner of Northampton Town FC to redevelop the club’s Sixfield’s stadium. The money subsequently disappeared under circumstances which are still under investigation.

Responding to Councillor Hadland’s comments Mike Ingram, a local historian and Chair of the Northampton Battlefield Society which has been heavily involved in the campaign to force the Council to act on the state of the Eleanor Cross, told the BBC that the Council’s moves were encouraging.  However, Mr Ingram added

“…we need to move fast.  We can’t wait any longer.  It should have been regularly looked after.  Let’s bring it back to its full glory so that it can be enjoyed by everybody.”

To underline the point that the Eleanor Cross does need urgent attention the BBC’s Tom Percival told listeners that,

“The green weeds growing out of the feet of Queen Eleanor speaks volumes.”