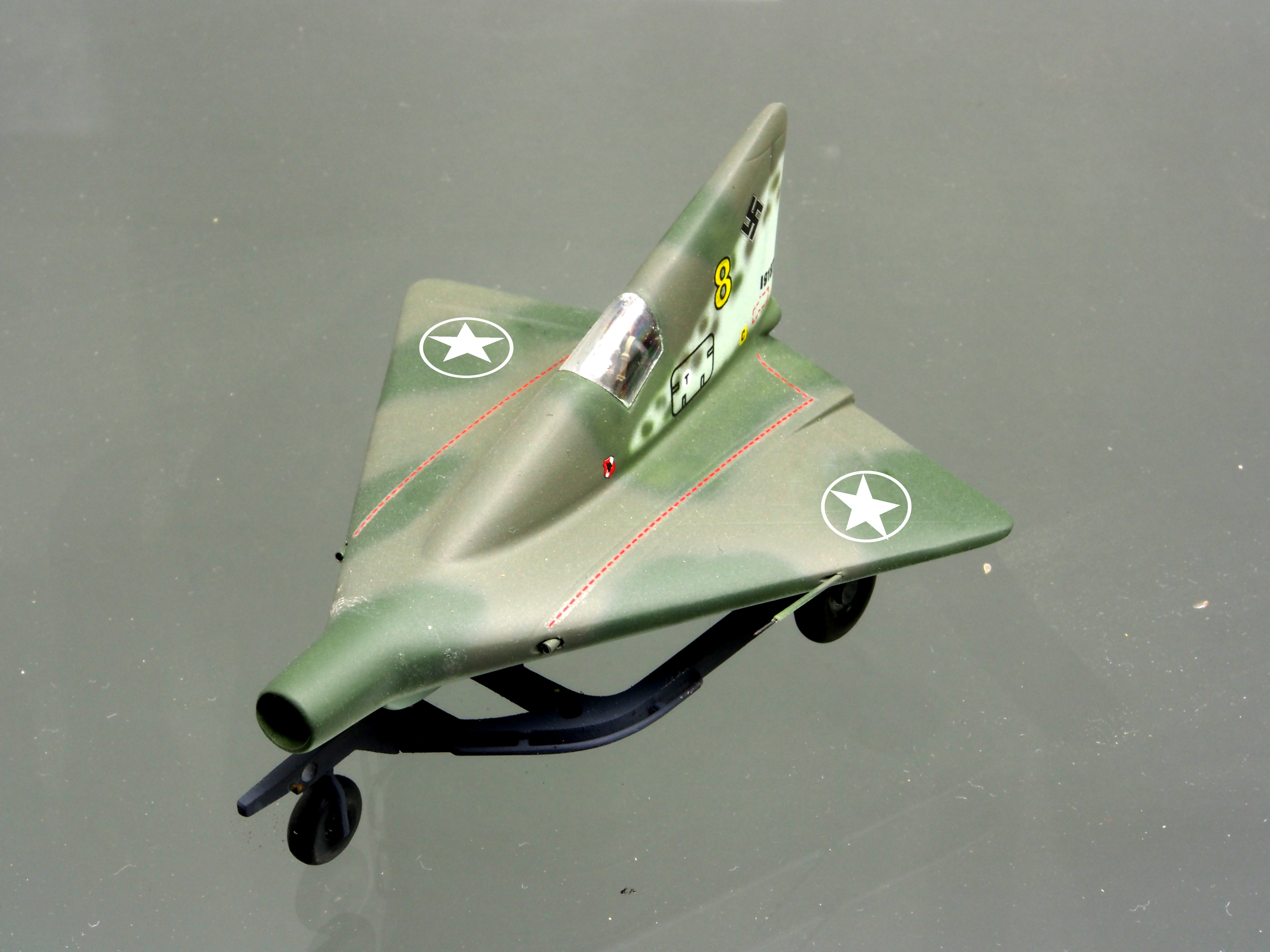 The White House has released this image of the proposed new USAF Fighter, the Lippisch P.13a

A Presidential Tweet issued in Washington early Saturday,  announcing the apparent cancellation of the Pentagon’s flagship F35 stealth fighter bomber programme, and it’s replacement by an experimental aircraft first proposed during the Nazi era, has stunned the US Military Industrial Complex and placed United States President Donald Trump’s controversial links with, so called, “Big Coal”  back in focus once again.

The news broke when the President Tweeted this message from his White House suite early this morning,

The President’s Tweet had shocked military analysts and Pentagon watchers reaching for their reference books, because the striking looking delta winged Lippisch P.13a is a little known, single seat, interceptor which was originally designed and tested in Nazi Germany towards the end of World War Two.  Most remarkable of all, once in the air, the aircraft is powered to blistering supersonic speeds by an innovative ram jet engine which is actually fueled by coal.

The Pentagon’s new fighter was designed by German aeronautical genius Dr Alexander Lippisch, who specialised in high speed and so called flying wing designs.  As well as the remarkable P.13a Dr Lippisch also worked on the development of the rocket powered Messerschmitt Me 163 Komet.   After the war Dr Lippisch was taken to the USA under the now infamous Operation Paperclip, and worked subsequently at the top secret White Sands Missile Range and it is thought likely that the detailed blueprints for the fighter were created at that time, and then filed away in the Pentagon archive until they were rediscovered and actioned by the President’s National Security team.  The prototype has been ordered from a previously unknown aerospace startup based in Argentina, but with links to US based Alt Right entrepreneurs including Breitbart News.

While the decision of the President to adopt a seventy year old experimental design, albeit one created by one of its former employees, might be controversial in some quarters, with critics suggesting it points to the President’s lack of experience in military matters, the proposed purchase has a number of attributes which are attractive politically.  Principally, in addition to being smaller and cheaper than the F35, the cost of which has ballooned to well over $100 million per copy, the fact that the P.13a’s ram jet engine is powered by granules of coal is a gift to the President after weeks of being besieged by accusations of cronyism, incompetence and collusion with the Russians.  President Trump spent much of the 2016 Presidential Election campaign promising he would reverse President Obama’s so called “War On Coal” and put American coal miners back to work, so this new patriotic use for the production from the mines of West Virginia, Kentucky and Pennsylvania is certain to be well received in Trump supporting States.

“Instead of traditional jet fuel the Lippisch burns coal granuals in a mesh drum which is rotated at 60 rpm.  The coal fumes are mixed with air at high pressure and and then ignited creating thrust to propel the aircraft forward.”

Asked by reporters how the Pentagon felt about the President’s radical move away from the F35 the Colonel Fisch commented,

“Now that the President has taken the decision on procurement of new fighters for the USAF we are very happy to take the highly capable Lippisch; especially if the new programme also puts American miners back to work.”
Fox News was more outspoken, with Pentagon analyst, retired Admiral and advisor to the Trump transition team, Pete ” Maverick” Mitchell telling Fox News anchor Sean Hannity,
“This really great deal saves jobs in the states like West Virginia which the President needs to hold in 2020, and we get to kick ISIS butt with a great new aircraft.  Even better we also change their climate with carbon particulates as well as change their geography with precision guided munitions.”

Later Presidential Spokesman Sean Spicer was forced to clarify the Fox News comment, reminding the White House Press Corps that Admiral Mitchell’s suggestion that carbon emissions from the P.13a might damage the atmosphere above the ISIS capital Raqqa, did not mean that the White House had changed its stance on human influenced  climate change which the President still believed could even be Chinese inspired hoax.

The F35 Lightning II, which now looks likely to be superceded by the Nazi period Lippisch p.13a
[Picture;  Public Domain via the US Air Force]

Another potential problem for the President might be the reception the deal receives across the Atlantic in London where just yesterday UK Defence Secretary, Michael Fallon met his US counterpart, retired General James “mad dog” Mattis .  The two key members of NATO discussed future defence spending among other topics.

Speaking anonymously, a source at the UK Ministry of Defence, which has been expected to buy the F35B for the Royal Navy’s two new aircraft carriers HMS Queen Elizabeth and HMS Prince of Wales, expressed reservations about the deal for the new fighters, telling thePipeLine,

“Obviously this unexpected decision by the President, which General Mattis made no mention of when he met Mr Fallon yesterday, may mean the unit cost of the F35 increases.  With the pound weak following Brexit this has the effect that we might only be able to buy one aircraft, and we could only afford to fly it when there is an “R” in the month.  But, if that is the case, so be it.  A coal powered fighter isn’t an option for the Royal Air Force.”
The source continued,
“While  interoperability is important between the RAF and our NATO allies, Mrs Thatcher and successive UK Governments closed down the UK’s  domestic coal industry so the RAF would be dependent on Chinese coal for its aircraft fuel.  That would not be an acceptable risk given the way they are already screwing us over Hinckley Point C.”
Back at the White House, President Trump’s Chief Strategist Steven K Bannon welcomed the deal, although he was forced to deny that the adoption of a Nazi fighter for the United States Air Force was either an attempt by the President to distract the media, or an expression of Mr Bannon’s own political leanings.
Mr Bannon told reporters,
“What finally tipped the decision to purchase the aircraft were the striking black “crooked cross” tail insignia on the model of the P.13a which we were shown by the manufacturer, 4thReichkrafttechnikfabrik BV of Bariloche, Argentina. It sums up the entire Trump Project and I am going to recommend to the President that we adopt it for the new Trump branded United States Air Force.”