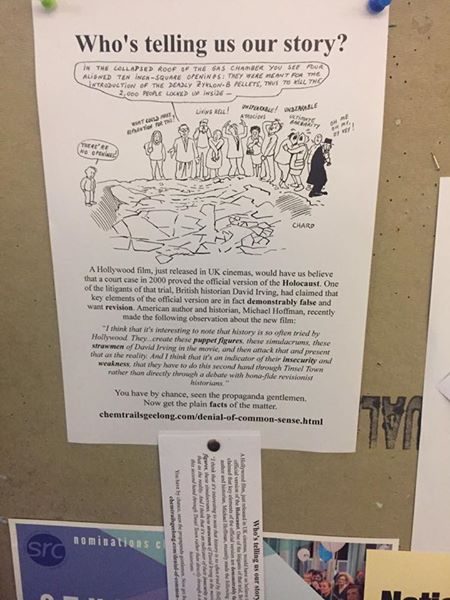 [Image via Facebook:  Fair Use for the purpose of reporting]

Glasgow University has reacted quickly to the posting of a Holocaust denial text, including an offensive cartoon, on at least one of the University’s public notice boards.  News of the incident broke on Social Media on the morning of Friday 3 February [2016] with reports of the discovery of the offensive material by a student who is understood to be from the University’s History Department.  However, thePipeLine can reveal that not only is this the second such incident in nine months at Glasgow, but that the posters are linked to an obscure Nazi revisionist and conspiracy web site based in Australia.  We can also report that at least four, and possibly five, other campuses were hit by the posting of similar material in Australia.  According to reports on Facebook the latest find was immediately reported to teaching staff and the matter was also referred to the senior management of the University.  However, it is unclear currently if the Glasgow incident was a one off, or whether material was posted elsewhere in the University, or the wider area and thePipeLine understands from sources close to the University that staff and students are now on the lookout for further postings and the University has stated that it is taking the matter seriously.  Meanwhile there are concerns that the incident may be yet more evidence of the international reach of Holocaust denial and extreme right-wing and anti-Semitic propaganda, with self radicalised individuals, or groups of extreme Right and Neo-Nazi activists able to communicate or draw on inspiration and resources, and replicate efforts, on a global basis.

While the earlier posting at Glasgow University, reported in the Glasgow Guardian in April 2016, was a repetition of general holocaust denial and conspiracy theory, the latest post appears to be timed deliberately as an attack on the feature film “Denial” which opened in the UK last week.  The film, which was scripted by playwright David Hare, portrays the famous David Irving v Penguin Books libel trial which hinged on Penguin’s defence team demonstrating that Irving was a Holocaust denier who deliberately distorted historical evidence for political purposes favouring Nazi’s and the extreme Right.  Irving’s defeat was a disaster not just for the discredited author, but for the entire revisionist movement. This replaying of Irvings legal humiliation in a high profile film has forced the Holocaust denial believers and Nazi revisionists to respond and so the new post also references the revisionist historian Michael Hoffman who is quoted as claiming that “Tinsel Town” re-staged the Irving trial because genuine Holocaust experts were too afraid to debate directly with, in Hoffman’s words, “bona-fide revisionist historians.”

The original material appears to have first surfaced in Australia in late February 2016 when Alice Workman, a reporter working for the news website Buzzfeed in Australia, wrote that it had turned up in a car park at Melbourne University. The material printed on the poster itself was drawn from an obscure conspiracy website hosted in America, but with apparent links to the town of Geelong also in Australia.  Buzzfeed reported that similar flyers were subsequently also recovered at Monash University, the University of Melbourne, the Australian National University, and the University of New South Wales.  Buzzfeed also cited unconfirmed reports that the same material had also been picked up at the University of Sydney.  The geographical spread of the material suggests that the postings were either the work of a well traveled individual, or perhaps more likely, that the material had for some reason become current among a dispersed cadre of Extreme Right and Neo-Nazi activists.  Now material citing the same website has also turned up twice in Glasgow.

Web research tools show that the primary source of the material distributed at the University sites in both Scotland and Australia is an anonymously curated and authored website, http://chemtrailsgeelong.com/ which was apparently created in February 2014 and is hosted by the Endurance International Group (EIG) in Burlington, Massachusetts.  However, it must be said that there is no reason to suspect that the hosting company knows that they are hosting a Holocaust denial website.  The website itself is registered to a PO Box in south Sydney, Australia, but significantly it carries specific references to alleged “chemtrails” and “mind control” operations in and over the town of Geelong in the State of Victoria.  Sources in Australia believe that the details contained in the report are such that the author is likely to be, or to have been recently, an inhabitant of the Geelong area.    Supporting this identification the website address also carries a reference to Geelong, as does the official description of the web site which reads,

“A disgraceful and ongoing act of environmental vandalism against the people of Greater Geelong, Australia and the world…..”

The site, which is also published in Italian, appears to have been active in the recent past because when checked by thePipeLine on 3 February 2017 the site front page recorded that the site was last updated 24th January 2017.  The latest material refers to a film, “Denial” which only opened in the UK on 27 January 2017.

However, the website itself is not overtly anti-Semitic or advertised as trafficking in Holocaust denial.  The Holocaust denial content is hidden in plain sight behind such innocuous sounding page titles as “The Greatest Swindle of All Time” and “Denial of Common Sense.”  However, Nazi’s and anti-Semites would almost certainly recognise such titles as possible short hand for Holocaust denial material.  For example the page “Denial of Common Sense” actually deals with the film “Denial.” and once you navigate into the drop down menus the message becomes clearer still with one page given the full title “The Greatest Swindle of All Time-  Uncovering the Holocaust Lie.”

While the website does not advertise its Holocaust denying colours, the website author[s] second principle obsession, the so called “Chemtrails Conspiracy” is carried overtly.  This conspiracy theory dating from the 1990’s claims that some long lasting trails left in the sky by high flying aircraft are chemical or biological agents sprayed by Governments for nefarious purposes ranging, it is alleged, from weather control to chemical weapons tests aimed at population control.

“Greenpeace have not seen sufficient evidence to justify further investigation into whether this is a real problem. As far as we are concerned, chemtrails are an urban myth – a conspiracy theory with no conspiracy.”

However, as at least one academic member of staff from Glasgow pointed out on the latest Facebook postings, such a coming together of pro Nazi revisionism, and ecological concern are not unusual on the Extreme Right.  The word ecology itself was first coined by the German Zoologist and early adopter of Darwinism, Ernst Haeckel in 1867.  A committed nationalist and eugenicist, towards the end of his life Haeckel became a member of the esoteric and secret Thule Society which lay behind the founding of the National Socialist Party.  Members of the Thule Society, originally called theStudiengruppe für germanisches Altertum or “Study Group for Germanic Antiquity” were required to swear that,

“… to the best of his knowledge and belief that no Jewish or coloured blood flows in either his or in his wife’s veins, and that among their ancestors are no members of the coloured races.”

This equation between Fascism and environmentalism was not confined to Continental Europe.  Writing in the magazine Red Pepper in the year 2000 Derek Wall noted that,

“Eco-fascism also has a lengthy lineage in Britain. The Soil Association, Britain’s organic lobbyists, counted amongst their earliest members Jorian Jenks, former agriculture advisor to the British Union of Fascists. AK Chesterton, first Chairman of the National Front, was closely linked to far-right environmentalism of the 1930s.”

The incident in Glasgow comes as anti-Semitism and conspiracy theory is rising up the news agenda thanks to allegations of anti-Semitic views being openly voiced on the Left, including in the British Labour Party and fears of the growing influence of the so called Alt-Right in the USA and Europe, many of the members of which choose to identify as the victims of various conspiracies.  The Trump administration’s citing of “alternative facts” [known to critics as unfounded beliefs or, more simply, lies], in order to combat what it sees as the bias of bulk of the mainstream media, has also led to fears that the currency of evidence based academic research and demonstrable historical fact is under threat.  The Glasgow find must also lead to the specific fear that the posting of such material is part of a low level, but possibly coordinated, attempt to intimidate not just Jewish students, but students and academics studying subjects such as history and archaeology.  The people whose work exploring the historical and archaeological reality of the Holocaust must be regarded as a clear and present danger to the racist fantasies of the Holocaust deniers.

Responding to the latest find in Glasgow a spokesperson for the University told thePipeLine,

“A small number of leaflets containing objectionable comment on the Holocaust have been found, and removed, from university premises. The University of Glasgow has a zero tolerance policy on racism, anti-semitism and the distribution and display of materials that are likely to cause offence. Given the public nature of many of our buildings it is possible that someone from outwith the university was responsible for this incident. We will continue to be vigilant and to again emphasise that such literature has no place on our campus.”

Has your school, college or university also been the target of the same Far Right material recovered in Glasgow, or of other attempts to legitimise Holocaust denial/Revisionism?
Tell thePipeLine:   emailmortimer@gmail.com