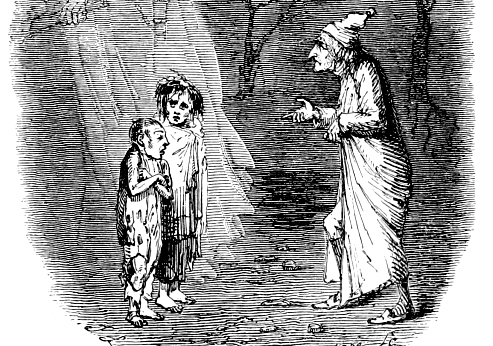 Ignorance and Want explained to Scrooge why they could not afford to develop A-Level Archaeology
[thePipeLine:   image public domain]

The hopes of the heritage sector that exam provider Pearson might have a change of heart and accept the support of the Council for British Archaeology and other heritage bodies to develop a new Archaeology A-Level appear to have been dashed tonight, as a spokesperson for the company told thePipeLine,

“…Pearson does not intend to develop A level Archaeology’,”

Hopes that Pearson might ride to the rescue of the examination had risen after Conservative MP, and co-chair of the All Party Parliamentary Archaeology Group [APPAG], Tim Loughton confirmed during Wednesday’s Westminister Hall debate on the future of the examination, that a delegation including Dr Mike Heyworth of the Council for British Archaeology, was to meet a Senior Vice President of Pearson on Monday [19 December] to discuss the future of the A-Level, and the potential for the CBA and other bodies to provide Pearson’s development team with specialist support.  However, it now appears that the meeting will be used to reiterate Pearson’s reasons for not taking forward development of a new Archaeology A-Level instead.  Earlier this month a spokesperson for Pearson hinted at those reasons, telling thePipeLine that,

“We have worked to take action where we can to ensure that students continue to have access to a diverse set of subjects at A level, but unfortunately we do not have the expertise or resources to take on all the subjects being withdrawn by other exam boards.”

However, the suspicion remains that the principle reason for the commercial exam providers pulling back from offering archaeology is that the relatively small uptake for the subject renders it unattractive in financial terms.

The news will come as a blow, not just to the over 13,000 people who have sighed the petition to save Archaeology A-Level set up by archaeology tutor Dr Dan Boatright, but to the various professional heritage bodies, including Historic England, who expressed concern that a small, but important, route into professional archaeology would be closed off by the commercial exam providers withdrawing archaeology from the list of A-levels on offer to students.

There are also fears that the end of archaeology as an exam subject in secondary education will suggest to pupils and the wider public, that the Government is signalling that the subject is somehow a luxury, rather than one for serious study.  A fear which if it takes hold, could have a damaging knock on effect regarding the public’s view of museums and efforts to conserve the historic environment, particularly in the development system.   The same fears were reiterated by Mr Loughton during Wednesday’s debate when he warned Schools Standards Minister Nick Gibb that,

“… in years to come, his colleagues in the Department for Communities and Local Government will find their plans for infrastructure projects seriously thwarted because he has not been able to produce trained archaeologists to do that vital job.”