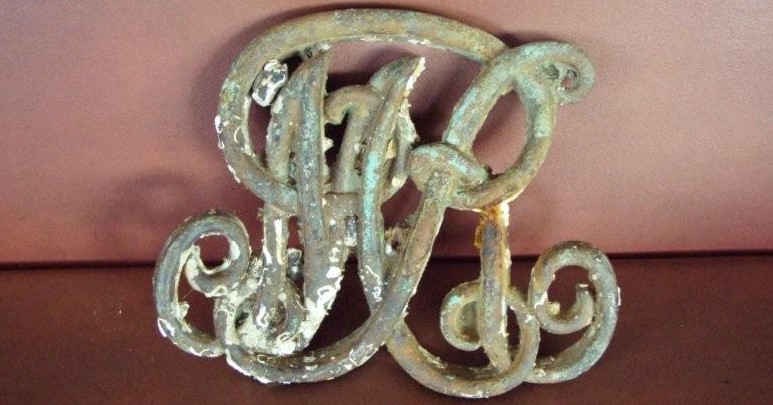 A photograph, supplied to the Ministry of Defence, showing a salvaged monogram which can only have come from the wreck of HMS Queen Mary, sunk at the Battle of Jutland with the loss of 1266 lives.

[Fair Use via thePipeLine]

Former Labour Defence Minister Kevan Jones is among numerous critics of the Ministry of Defence’s policy towards historic Royal Navy wrecks who have reacted with indignation, and branded as “misleading”, a suggestion, made by a Ministry of Defence spokesperson to the Guardian newspaper, that the Ministry was not aware of the illegal salvage of Royal Navy vessels sunk in 1916 at the Battle of Jutland.  The critics point out that a number of earlier comments by the Ministry of Defence, including the answer to a written Parliamentary Question posed by Mr Jones in May 2015, indicate that Government agencies such as English Heritage, now Historic England, were aware of specific allegations that illegal salvage was being undertaken on the wreck of the battle cruiser HMS Queen Mary as early as 2011 and that Civil Servants, Ministers and the MoD Police were provided with photographic proof of the activities of Dutch salvage company Friendship Offshore on the wreck of Queen Mary in March 2015.  Further proof of the damage to the Jutland wrecks was published in the spring of 2016 with the publication of the book “Jutland 1916- the archaeology of a Naval Battlefield”, by Dr Innes McCartney of Bournemouth University.  Drawing on fifteen years of research in the North Sea Dr McCartney revealed that almost two-thirds of the twenty-four known Jutland wrecks had been the victim of commercial salvage, much of it unauthorised.

Readers of the Guardian paper edition and website on Monday morning, [19 September 2016] were greeted with a feature article by Guardian journalist Robert Booth, regarding the recent discovery of the intact wreck of the armoured cruiser HMS Warrior by an Anglo Danish team including Dr McCartney.  Warrior is the twenty-fifth and last Jutland wreck to be found.  Pointing out that the remains of the ship, which sank while under tow the day after Jutland, is currently undamaged by salvage crews, the article reported demands that the Ministry of Defence take active steps to protect the wreck as both the last intact time capsule relating to the key naval battle of the First World War, and the maritime military grave of the seventy-one members of the ship’s crew who were lost with her.

“The MoD should chase these things down…When I was involved in the MoD we took grave looting quite seriously and I absolutely believe that criminals should be pursued to discourage others as much as anything else.”

Lord Boyce has a personal interest in the fate of the wreck of the ship because his father,  Albert Boyce, was a Petty Officer serving aboard Warrior at Jutland and survived the sinking.

However, unusual though such an outspoken intervention by a senior, albeit retired, officer is,  it is the last line of the statement to the Guardian issued by a Ministry of Defence spokesperson which has raised eyebrows.

In the statement given to the Guardian the Ministry of Defence spokesperson is quoted directly as saying,

“We are not aware of any illegal salvage activity taking place on other Jutland wreck sites.”

However, critics of the MoD’s stance pointed out immediately that a succession of authoritative reports about just this activity have been sent to both senior Government Officials and to Ministers at the Ministry of Defence and the Department for Culture Media and Sport.

In particular thePipeLine has seen an e-mail which was sent to the section of the Ministry of Defence dealing with historic Royal Navy wrecks on 31 March 2015, which not only outlined the allegations of illegal salvage on the wreck of HMS Queen Mary, but recorded that the information was passed to a number of senior civil servants and to Government Ministers Ed Vaizey MP who was then Minister of State at the Department for Culture Media and Sport with responsibility for the overall policy towards historic wrecks, and to the Secretary of State for Defence and member of the Cabinet, Michael Fallon MP.

Later e-mails sent to the Ministry of Defence Police named a UK national who was alleged to have been present on the salvage vessel and who, legal experts confirm, could be prosecuted under the UK Protection of Military Remains Act.  The Act protects designated military wrecks in UK waters and prevent interference in such wrecks by UK nationals and UK flagged vessels when such wrecks are under another national jurisdiction, as is Queen Mary which lies in the Danish zone of the North Sea, or which lie in International Waters.

In addition, in May 2015 Mr Kevan Jones MP asked a Parliamentary question on the subject of the alleged illegal salvage from HMS Queen Mary by Dutch salvage company Friendship Offshore based in the port of Terschelling.

On 5 June 2015 the Minister of State for Veterans, Reserves and Personnel, Mr Mark Lancaster answered,

“In March 2011 the Ministry of Defence Police (MDP) received an allegation of theft of artefacts from the sunken battlecruiser HMS Queen Mary. After due consideration it was concluded by the MDP that no further action could be taken. Any new information will be considered by the MDP in the normal manner.”

In other words the MoD told Parliament that it knew of the illegal salvage activity on HMS Queen Mary at the latest in early 2011, and had concluded, not that the report was false, but that, in its view, no action could be taken.

Moving forward to 2016, the Ministry of Defence was again quoted as commenting on the issue of illegal salvage from HMS Queen Mary when detailed allegation regarding the activities of Friendship Offshore, which were first raised in public in a report in thePipeLine, formed the basis of a recorded package and studio discussion on the BBC’s evening magazine programme, “The One Show”, which was broadcast on 30 May 2016.  The eve of the centenary of the Battle of Jutland.

Asked to comment on the latest denial, regarding the issue of illegal salvage from the Jutland wrecks by the Ministry of Defence, as reported in the Guardian, Kevan Jones MP told thePipeLine,

“The MOD are aware of the plundering of these wrecks. Their inaction is a disgrace and insult to the memory of those whose last resting place is on one of these wrecks.”

The MP for North Durham, who is also a Commissioner of the Commonwealth War Graves Commission, added,

“The MoD can’t keep ignoring the evidence especially when they have the powers to act.”

thePipeLine has e-mailed the section of the Ministry of Defence with responsibility for historic Royal Navy wrecks and asked it to comment on both Admiral Boyce’s criticisms of MoD policy and on the allegedly misleading nature of the statement issued to the Guardian.

Up to the time of publication we have not received a reply.