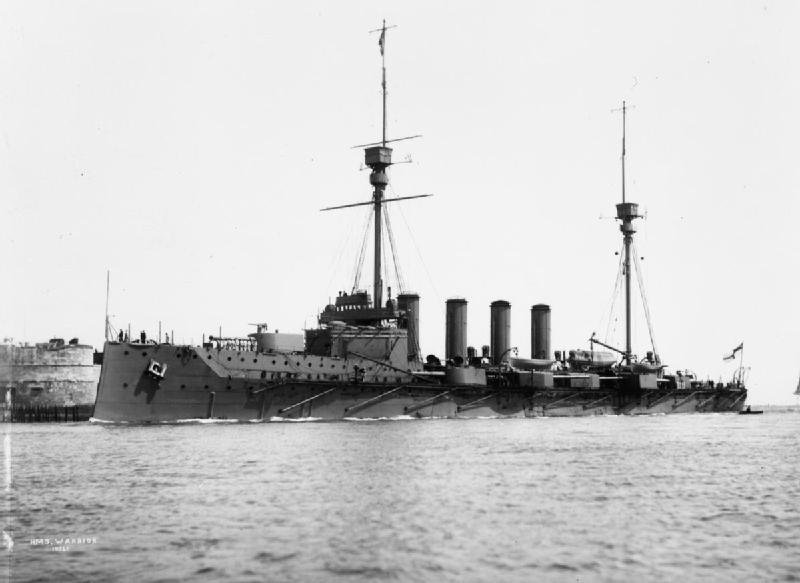 The announcement that an Anglo Danish expedition including maritime archaeologist Dr Innes McCartney of Bournemouth University and Danish personel from the M/S Vina belonging to JD- Contractor A/S working on behalf of the Sea War Museum in Thyborøn, Denmark, had located the intact wreck of the armoured cruiser HMS Warrior, is both a vindication of the team’s work in setting out to locate and survey all the vessels lost during the tumultuous Battle of Jutland which cost the lives of over 8000 British and German seafarers, and a challenge to the authorities of Britain and Norway to ensure that the wreck site of Warrior;  the maritime military grave of the 67 members of her crew who were killed in action and remain aboard her;  is kept secure from the predatory salvage which has ravaged other Jutland wreck sites.   HMS Warrior is the last wreck of a warship sunk as a result of the Battle of Jutland to be located.

According to the ROV survey undertaken by the Anglo Danish team, the 14,000 ton, four funelled cruiser, which was armed with six nine inch and four seven inch guns, lies upside down in 83 meters of water in the Norwegian Exclusive Economic Zone [EEZ] of the North Sea.  Warrior had been heavily damaged during the Battle of Jutland on 31 May 1916 when she found herself in action with the German battlecruiser SMS Derfflinger , suffering at least fifteen hits from Derfflinger’s eleven inch guns, and after the battle she was taken under tow by the Royal Navy seaplane tender HMS Engedine.  But significantly the research team report that, while she has snagged fishing nets,  her hull is intact and her propellers are present, indicating that she has not been the victim of illicit salvage like many of the other Jutland wrecks.

Sixty eight of Warrior’s crew were killed in action and remain with the ship.  Their names are included on the Royal Naval Memorials at Plymouth and Chatham, which commemorates members of the Royal Navy with no known grave.  Their number includes many members of the ship’s engineering department who would have been at their action stations in the ship’s engine and boiler rooms, the areas most vulnerable to illicit salvage on account of the extensive use of copper tubing and brass fittings.  The youngest missing crewman is Boy 1st Class Edward Fredrick Baker from Croydon who was just 17 years old.  Two other members of the crew died later of wounds.

Engadine actually managed to tow the stricken cruiser for seventy five miles before Warrior finally succumbed to flooding at 07.15 on the morning of 1 June.  The surviving members of Warrior’s company were transferred to the seaplane tender as she came alongside.  A feat which saw Engadine’s commanding officer, Lieutenant-Commander C. G. Robinson, mentioned in dispatches for the “skilful and seamanlike manner” in which he handled his ship.

During the transfer of Warrior’s survivors to Engadine  Lieutenant Frederick Joseph Rutland, R.N [RNAS] of Engadine won the Albert Medal for bravery in trying to rescue a badly wounded member of Warrior’s crew who had fallen between the two ships.  Unfortunately when he was recovered it was found that the crewman had been killed, crushed between the hulls of the two vessels and Lt Rutland’s survival in the same situation was described as “miraculous.”

The work of Dr McCartney and his Danish colleagues now means that all the known casualties from Jutland have been located and as a result maritime archaeologists naval historians now have hard evidence as to the position of the various ships involved in the battle which can be used to bring greater understanding to the documentary records of Jutland.  The archaeology also provides a forensic record of the damage inflicted on the various ships.  However, the detailed surveys by diver and latterly by Remotely Operated Vehicles [ROV’s] and multibean sonar have also revealed that many of the vessels have been ravaged by illicit salvage.  In particular items which can be sold into the metals market for cash such as the giant manganese bronze propellers and copper boiler room condensers have been removed from a number of vessels.

Referring to the activities of Dutch salvage company Friendship Offshore, which thePipeLine revealed in May, had been removing illicitly such valuable non ferrous metals from the wrecks of HMS Queen Mary and HMS Indefatigable, Dr McCartney told thePipeLine,

“The wreck of HMS Warrior is untouched and represents the final chance to save an entirely intact battleship wreck from Jutland for posterity”.

In achieving the protection of the wreck in the long term there are two main tools available to Governments.  The first is the concept of Sovereign Immunity in International Law.  This means that a warship lost on state’s business, such as fighting in a battle, may not be touched without the express permission of the flag state which owned it.  This concept should be recognised by all Governments, is written into the International Convention on Salvage and should be enforceable in local courts.  The second tool is the UNESCO Convention on the Protection of the Underwater Cultural Heritage [2001], which lays down strict rules for the proper investigation, conservation and display of shipwrecks and archaeological sites underwater which are more than one hundred years old.  The Convention also bans the commercial exploitation of such sites.  The Jutland wrecks became covered by the terms of the convention this year, 2016, the centenary year of the battle.

However, at the moment none of the States with a direct interest in the wreck site of HMS Warrior, Great Britain which owns the wreck, Norway within whose Exclusive Economic Zone she lies and Denmark, the home of the vessel and crew which found her,  are so called “states parties” to the 2001 UNESCO convention.  That is none of them has ratified the Convention formally.  That said, thePipeLine understands that the Government of Denmark is considering ratifying the  Convention, while earlier this year the British Government announced that it too would reconsider the matter of ratification after coming under pressure from the mainstream maritime archaeology community over of their apparent lack of concern regarding the alleged potential or actual commercial exploitation of various historic shipwrecks by salvors, including other vessels lost during World War One and the wreck of HMS Victory 1744 in the western English Channel.

The British Government also employs the Annex to the UNESCO Convention, which lays down the rules which should govern maritime archaeology projects, as its policy for historic shipwrecks, including military wrecks.

Norway also recognises the rules in the Annex to the UNESCO Convention as being entirely compatible with its own Cultural Heritage Act  and while it did not ratify the Convention, the Norwegian Government  stated that it would apply the rules unilaterally.  Norway has also stated a prohibition on moving or damaging underwater heritage in its contiguous zone which would be protected inside its territorial waters under the terms of the Cultural Heritage Act; a policy which should serve to offer further legal protection to HMS Warrior if enforcement became necessary.

As always in the case of the conservation of historic wrecks on the high seas, the test will be, are the authorities willing to monitor the wreck sites, a task which is much easier  than it used to be with the advent of satellite surveillance using the Automatic identification System [AIS] which all ships over 300 tons must carry and other technologies and above all, if potentially illegal activity is spotted, are they willing to arrest and prosecute the alleged perpetrators?  The maritime archaeology community and campaigners for the protection of naval heritage and the graves and memorials of mariners, will see the intact wreck of the last Jutland casualty to be found as a test case  for an effective enforcement regime.  In this, the centenary year of the Battle of Jutland, the greatest naval battle of the battleship era, it is a test that the community will be doing its best to ensure the UK Government and Ministry of Defence passes.