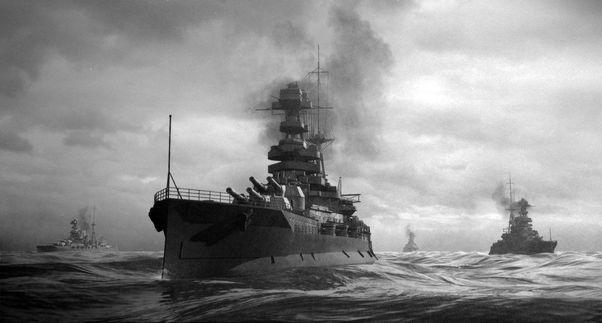 Full ahead at action stations, a CGI Image of the British Grand Fleet at Jutland

There are times when much of what passes for historical documentary on television in 2016 seems to consist almost entirely of over either over egged, or downright spurious, claims based on flawed evidence and wishful thinking, or yet another re-hash of various aspects of pseudo history involving conspiracies which include the Knights Templar, Freemasons, UFO’s, Nazi Technology, cryptozoology  and the alleged escape of Adolf Hitler [not necessarily all at the same time, but it can’t be long before someone commissions it, probably the History Channel].  As a result it is refreshing to be able to review a piece of history themed television which actually takes its responsibility to historical evidence seriously, and treats the audience as sentient creatures who might even be interested in following a genuine process of discovery, even without a “celebrity presenter” to front the whole thing.  But that is the kind of programme “Jutland:  WW1’s Greatest Sea Battle [Mallinson Sadler Productions for Channel 4] is.

This approach is particularly pleasing to see when the media image of underwater archaeology has been manipulated and, some would say, traduced by the series of what are little more than pro-treasure hunting, reality TV, infomercials, facilitated by Odyssey Marine Exploration, under the title “Treasure Quest” [JWM Productions]; and more recently by the Arts and Entertainment Network/History Channel series, “Pirate Treasure of the Knights Templar”  [October Films], which partnered controversial underwater explorer Barry Clifford with that well known purveyor of TV pseudo history “Forensic Geologist” Scott Wolter, and which in the course of six forty five minute episodes, did not even have the honesty to tell the TV audience explicitly that Exhibit One of “Captain Kidd’s Treasure”, supposedly discovered by Clifford’s divers on Madagascar, and claimed to be a silver ingot, was actually a misidentified lead ballast bar, as revealed by UNESCO archaeologists.

In fact British diver and archaeologist Dr Innes McCartney has been ploughing a, sometimes lonely, seaborne furrow of serious maritime TV archaeology on 20th century wreck sites since 2000, including involvement in an earlier documentary about Jutland for Channel 4.  The 2003 film was able to demonstrate the likelihood that the skimping of safety measures to facilitate faster shooting by the Royal Navy’s battlecruiser fleet probably played a significant role in the loss of three of the ships, HMS Indefatigable, HMS Queen Mary and HMS Invincible.  However, the new programme, broadcast on Channel 4, is probably the most ambitious attempt to date to combine Dr McCartney’s forensic archaeological wreck investigation with the techniques of television production.  It is made possible by the ability of data from the kind of state of the art multibeam sonar deployed on the expedition survey ship MV Vina, to produce three-dimensional images of objects on the sea bed, which can then be taken on and re-interpreted in post production, to create the kind of photo-realistic CGI images viewers have become accustomed to in the cinema and on their games consoles.  This ability to take a wide-screen view of the action on the surface and on the seabed, counteracts what has been the principal difficulty in putting shipwreck archaeology on TV which is that one wreck looks very much like another, and it is very difficult to orientate the viewer, especially in the kind of low, or even pea soup visibility, many wreck sites suffer from.

Of course, CGI technology can only take you so far before it becomes boring and repetitive [just ask anyone who sat through the Star Wars prequels] and television also needs a hook to reel in an interested, but non specialist, audience.  The hook in this case is “human interest” in the shape of Nick Jellicoe, the grandson of the Admiral in charge of the British Grand Fleet at Jutland, Admiral Sir John Jellicoe.  After the battle Admiral Jellicoe faced another conflict, this time with is deputy and successor in command of the Grand Fleet, Admiral Sir David Beatty, and those in the Admiralty and the media who criticised him for not delivering the triumph of a new Trafalgar which they believed the multi million pound investment in the Royal Navy, and generations of Imperial propaganda had promised.  In the early 1920’s things went so far that, while ennobled as Lord Jellicoe, the Admiral was packed off to the Governorship of New Zealand, at the same time as Beatty forged his own signature on a document to make it look as if it had come from the battle in 1916 and that his ships had never lost contact with the German Fleet when in fact they had.  However, the programme is far from a hatchet job on Beatty, or for that matter a hagiography of Jellicoe.   Every senior officer depicted in the programme, British and German, is shown as responding in a very human and fallible way to the pressures of senior command in the kind of war, using the kind of technology , no-one had dealt with before.

This humane approach extends to the lower decks.  Another staple of the history factual is the often cheesy, low budget, “dramatic reconstruction”.  Here, amid the technology deployed to explain the terrifying violence of Jutland, the other human interest content is supplied in the appropriately chosen and quietly understated, witness statements, spoken by an actor, which intersperse the narrative.  Perhaps most poignant is the description of the fate of Jimmy Green who survived the explosion of HMS Indefatigable which killed over a thousand of his shipmates, only to be killed minutes later by a later German shell while struggling in the water.

Innes McCartney says in the introduction to the film, “The shipwrecks don’t lie.”  Of course programme makers can and do, to a greater or lesser degree, and in their defence it has to be said that often a certain amount of creative deception is inevitable in any production.  After all, television is an artifice.  However, one of the great problems making historical documentary is illustrating a narrative with images in what is predominantly a visual medium.  All too often generic archive film is inserted, without attribution, with the implication that it shows the action being described.  A production practice which is at best lazy and can often be misleading with sometimes, to history buffs at least, hilarious results.  One favorite of mine are the shots of American dive bombers used to illustrate a documentary about the Japanese attack on Pearl Harbour.

Here again “Jutland” scores as the programme first admits that one of the problems facing researchers [and programme makers] is precisely this lack of film and photographs of the battle itself, and then deliberately introduces the often inappropriately used film of the horrific last moments of Jutland veteran, the battleship HMS Barham, as she was torpedoed, capsized and blew up in the Mediterranean in 1941, as an illustration of what the end of the British battlecruisers could have looked like, without pretending for a moment the film is anything other than what it is.

I am probably one of the few people who remembers a series which went out in the old Southern Television region of ITV in the late 1960′ called “Action At Sea”.  Broadcast in the late afternoon, my recollection is that I watched it after getting home from school, the programme consisted of an on screen presenter telling the story of famous sea battles like Salamis, Jutland and Tsu Shima, using the 1960’s equivalent of CGI; model ships on the flat calm of a table top ocean, in 625 line black and white.  As a programme pitch in 2016 it would probably have about as much chance as Alan Partridge’s “Monkey Tennis”, unless that is the commissioning editor wanted to be particularly off the wall and fashionably retro [see formats like “Back in Time for Dinner”].  However, alongside “All Our Yesterdays”, an example of what would now be called a “cut and paste” programme using World War Two newsreels; the BBC’s archaeology series Chronicle and HTV’s pocket sized epic “Arthur of the Britons”, that programme helped to shape a life long enthusiasm for maritime history and archaeology in this reviewer.  Obviously it is far too soon to tell if  “Jutland:  WW1’s Greatest Sea Battle” could have a similar effect on a school child watching today.  However, as well as demonstrating the value of well conducted maritime archaeology in the interpretation of events, even from the relatively recent past where there are shelves of contemporary documents, the programme should also be compulsory viewing for television’s commissioning editors factual and for budding directors and producers at film schools.  That is because the programme makers  have been able to show how complex technical issues and intertwining human and overarching historical narratives, can be married in a visually and emotionally compelling way, without compromising the evidence.

Indeed, it is a mark of the integrity of the programme that the final image and thought the audience is offered is not Nick Jellicoe’s reaction at the end of his family journey, let alone the fatuous high fiveing, or crocodile tears, of amateur presenters “saving history” or “solving the mystery”, found in less ethically grounded history factual, but a thoughtful argument from a genuine subject expert, Professor Eric Grove, who ends the programme on a dying fall,  acknowledging the ambiguity of Jutland, saying;

“Jutland-WW1’s Greatest Sea Battle” does not end all the controversies, but it explains how they came about, and the evidence from Dr McCartney’s surveys will need to be factored in when ever those controversies are discussed again.

Jutland-  WW1’s Greatest Sea Battle was first broadcast in the UK on Channel 4 on 21 May 2016 and will be available on Channel 4’s Catch Up service for 30 days .

Dr Innes McCartney’s book “Jutland-the Archaeology of a Naval Battlefield”, detailing the evidence which formed the basis of much of the programme, is available from the publisher Bloomsbury and other book sellers in hardback and electronic formats.