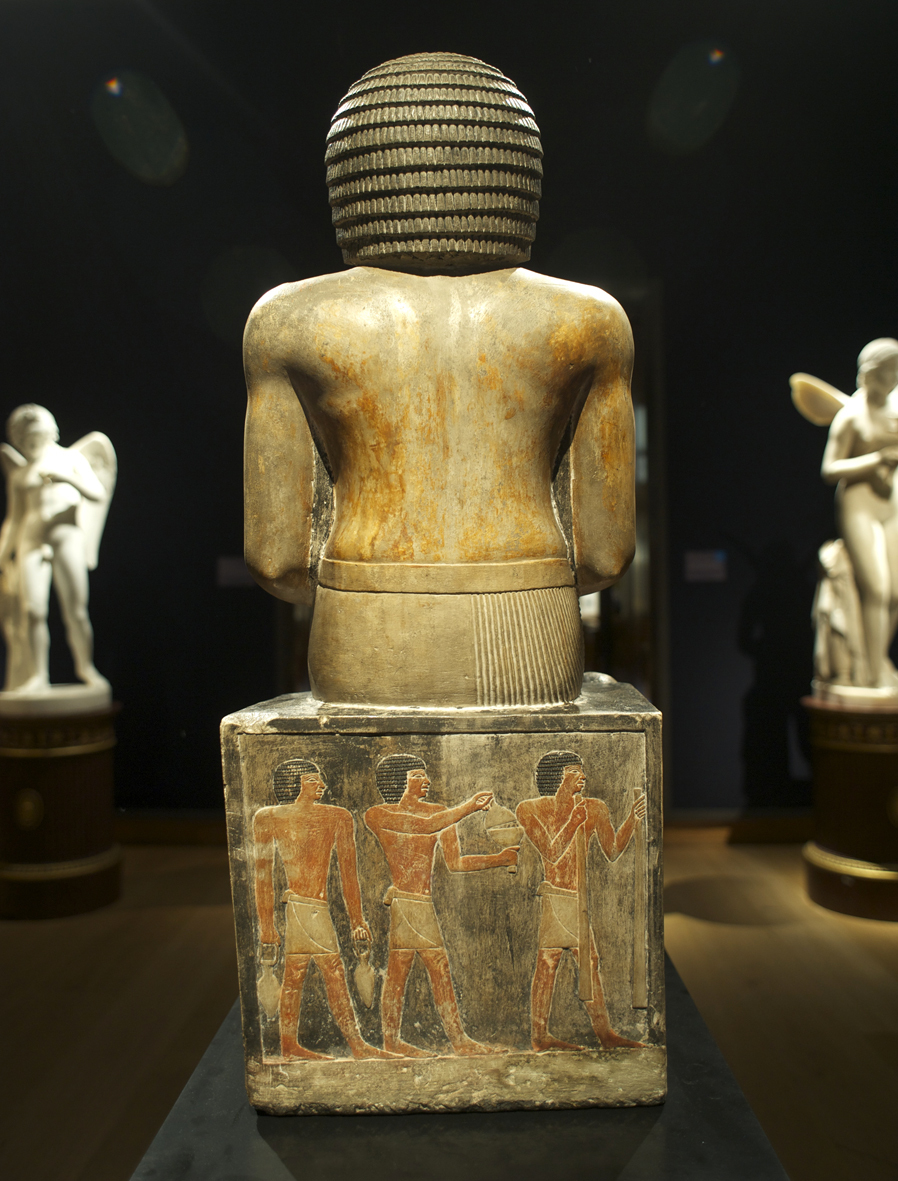 Has the World Seen the back of Sekhemka?

The full extent of the loss to Britain, Egypt and potentially to international scholarship, brought about by the sale of the statue of the Egyptian Old Kingdom Scribe Sekhemka to an anonymous buyer in the United States, has become clear with publication of some of the case papers by Arts Council England and a summary of the case by the Department for Culture Media and Sport.  Quoting the lead expert advisor to the Arts Council administered “Reviewing Committee  on the Export of Works of Art and Objects of Cultural Interest”, the account of the Sekhemka case in the DCMS annual report into the “Export of Objects of Cultural Interest 2014/15” states that the initial application for an export licence was opposed because;

“The Keeper, Ancient Egypt & Sudan, British Museum, acting as expert adviser, had objected to the export of the statue under the first, second and third Waverley criteria on the grounds that it was so closely connected with our history and national life that its departure would be a misfortune, that it was of outstanding aesthetic importance and that it was of outstanding significance for the study of Egyptology and the history of art.”

The three Waverley Criteria are used by the Reviewing Committee to judge the importance of a cultural object, and triggering just one of them is usually enough to see an object subjected to a temporary export ban so that funds can be raised to match the purchase price, and the description of the statue as outstanding will leave many people wondering just why it was allowed to leave the UK with apparently so little effort on the part of the Government and the museum world to keep it here.

The temporary export ban imposed by the Government could not be turned into a rescue of the statue for the nation because the sale of Sekhemka by Northampton Council and its then Leader, David Mackintosh MP, was judged unethical, and may yet be found to have been unlawful.  As a result no museum body would consider matching the auction price as that would have been to reward the councils unethical behavior and would have represented a double subsidy, as the object was already owned by the public.  The result was that, while there were suggestions that the Egyptian Government might step in with an offer to compensate Sekhemka’s owner, no museum or cultural body engaged with the process.  Instead thePipeLine understands that the Northampton based “Save Sekhemka Action Group” asked the Secretary of State for Culture, John Whittingdale, and the Museums Association to intervene and negotiate a solution which would see Sekhemka retained in the UK in a major museum, ideally the British Museum.   However, no one in the Arts establishment engaged with this initiative, with the DCMS claiming it had no powers to intervene.  Critics argued that this was simply an excuse not to act as the Government did not need legal authority to negotiate as Ministers engage in various forms of negotiation all the time.

Meanwhile, while Northampton Borough Council was sanctioned after the sale, being expelled from the sector body, the Museums Association, for five years and as a consequence was barred from various forms of funding for which membership of the Association is a pre-requisite, there is no evidence that anyone in the Museums Association, or at any major museum, made any attempt to break the log jam over Sekhemka.

The result has been an international scandal, with Egyptian Antiquities Minister, Mamdouh al Damaty calling the sale “a moral crime against world heritage”.

In a press release issued last week the SSAG reacted to this perceived inaction on the part of the museums establishment by stating;

“It is regrettable that during this time we have found no official support for our campaign from the great national museums and that the impartial condemnation of Northampton Borough Council (NBC) by Arts Council England (ACE) and the Museums Association (MA) made no impression.”

It might be seen also to be appropriate that the Sekhemka case papers are receiving publicity on the same day as British Prime Minister David Cameron hosted an international conference aimed at stamping out corruption in international politics and business life.

While there is no evidence that the new owner of Sekhemka is corrupt, or that they have used the purchase of the statue for a World Record price of £15.76 million as a tax dodge, or even to launder dirty money, there is equally no evidence that this is not the case.

Campaigners for transparency in the multi billion pound commercial auction trade, point out that the anonymity of the auction room has no legal standing.  It is merely a private arrangement between the Auction house, in the case of Sekhemka Christie’s, and the client who sells or purchases an artifact.  As such it is at the very least self serving, blocking proper public scrutiny and at worst can be used to hide criminal activity such as money laundering.

The Government is not party to these private contractual arrangements and the Sekhemka campaigners say it is time for the DCMS to publish the name of the new owner of Sekhemka so that representations can be made to ask that person, or company, to place the statue on public display and allow access for researchers.

Looking to the future, the Save Sekhemka Action Group have also argued in their recent press release that;

“…it is high time that ACE, the MA and the museum world insist that the UK Government ends the right to anonymity in Auction Rooms. In the same way that property owners must soon declare the beneficial owner, so must and should purchasers of high end art and antiquities.”

Meanwhile the DCMS report on the Sekhemka case carries a dry addendum which speaks volumes about the powerlessness and inaction of the UK Museums establishment.

“At the time of going to press, which occurred after the end of the second deferral period, no matching offer was received and an export licence was issued.”

It is an outcome which begs the question:  If the Museums Association, Arts Council England and the Government in the shape of the Department for Culture Media and Sport, all of whom are supposed to represent the public interest in such matters, would not fight to keep what their own experts described as the supremely important Sekhemka in the UK and in the public domain, what would they fight for?

There is a famous observation that the brave and stoical British Tommies who suffered massive casualties during World War One were “lions led by donkeys”.  The lions of the Save Sekhemka Action Group and the other archaeologists and art historians who campaigned to prevent the unethical sale and export of Sekhemka might be right to conclude that, in the case of Sekhemka, the donkeys did not even bother to try to show any kind of leadership at all?