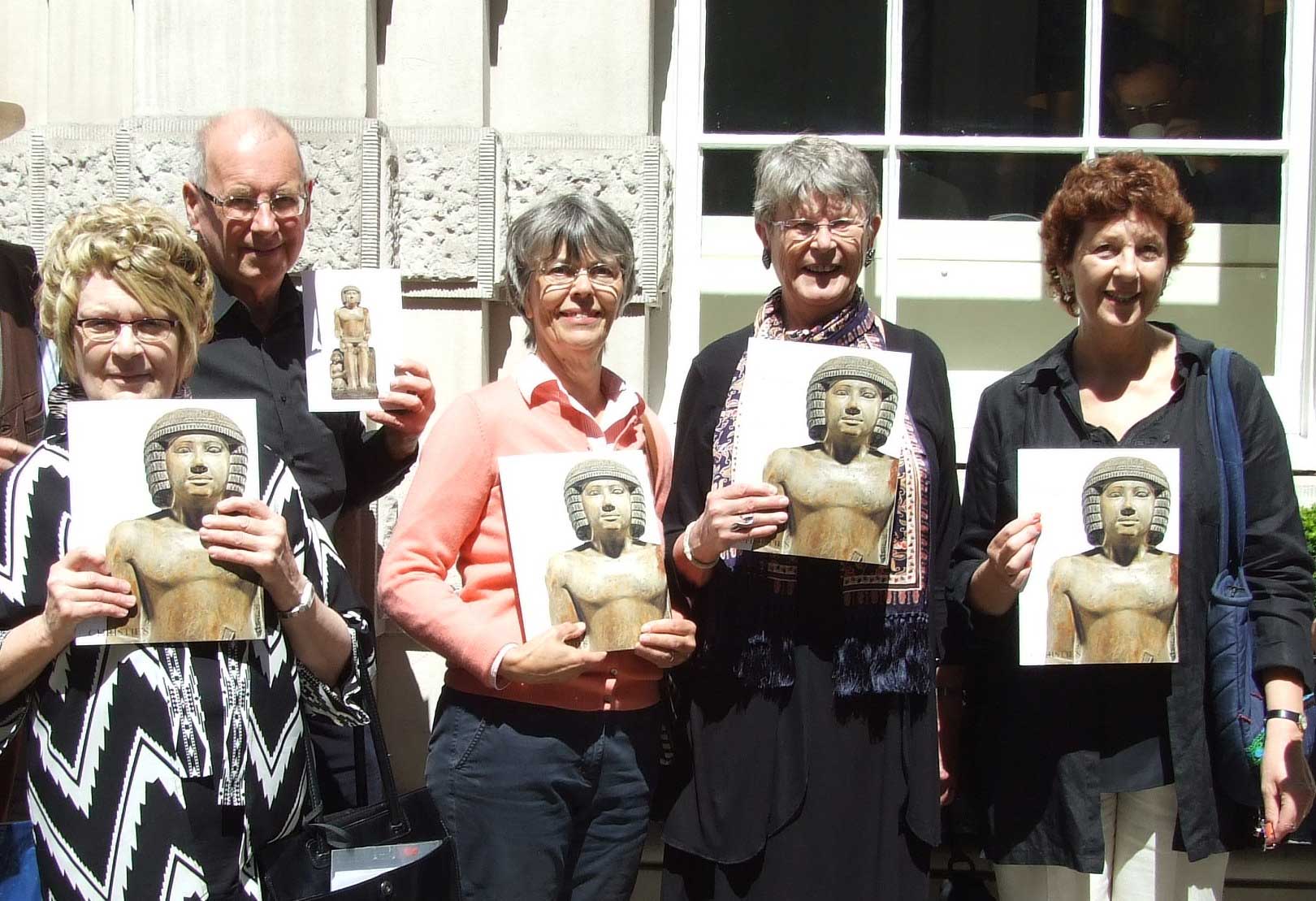 Members of the Save Sekhemka Action Group protesting outside Christie’s in London in July 2014
[Image:  thePipeLine]

The Northampton based UK arm of the campaign to keep the internationally important limestone statue of the Egyptian Scribe Sekhemka, the Save Sekhemka Action Group,  has bowed out of the fight to retain the statue in the pubic domain with a defiant press release which takes aim at the Arts Council, the Museums Association and the department for Culture, Media and Sport accusing them of being “toothless” and “window dressing” cuts to local authority museum funding.

At the core of the press release is the allegation from the group that it received no support from any significant sector body or agency;

Despite having revealed facts relating to the unethical and possibly illegal behaviour of NBC [Northampton Borough Council], its former leader and its Chief Executive and his staff”;

“…we have been unable to persuade the Public Auditor and our MPs that there was a serious case to answer.”

Indeed, the group alleges the Public Auditor gave the Sekhemka deal a clean bill of health after a simple telephone conversation.

Arts Council England and the representative body for much of the museum sector, the Museums Association, come in for particular criticism;

“ACE [Arts Council England] and the MA [Museums Association] meted out toothless punishments in the form of loss of Accreditation and MA membership to which NBC paid no attention.”

However, defenders of these two bodies would point out that they can only work with the limited legal tools provided-  for example, local authorities can count museum collections as financial assets and there is no statutory requirement for authorities to provide local museums or observe the Museums Association code of ethics, while ACE is required to act impartially over export matters and retain commercial confidentiality.

The action group previously expressed its anger at the perceived lack of support from the regulatory bodies in a statement, released in March in the run up to the export of the statue from the UK to, it is widely believed, the United States.  Then the group said:

“We recognise that the British museum world is in dire straits and, based on our experience with Sekhemka and the numerous other cases of museum closures and object disposal, any attempt to rescue it is not going to be led by the Department of Culture, Media and Sports, Arts Council England  or the Museums Association. These bodies have demonstrated no practical initiative or leadership at a time when we are faced by unaccountable elites who can close or reassign a collection from one part of the country to another (usually London) at will, and supposedly accountable politicians who are quite happy to ride rough shod over ethics and even legal questions, to cash in and destroy overnight collections, museums and galleries which have taken decades if not centuries to build up.”

Many independent observers of the state of the heritage sector would probably agree in large part with this point of view.  Like the campaigners to prevent the sale of parts of the Riesco Porcelain collection by Croydon Council, the save Sekhemka Action Group have played the best game they could on a far from level playing field, but ultimately could not match the financial and legal resources of Northampton Council and the uncountable financial power of the major commercial auction houses, in the case of Sekhemka, Christie’s.  The only possible equalizers;  Arts Council England and the DCMS seemed

However, the latest statement does not simply consider the issue in terms of UK museums policy.  In a nod in the direction of the increasing evidence high end art and antiquities can be vehicles for money laundering and tax avoidance and evasion, the SSAG also address the international implications of the sale of Sekhemka for a World Record price of £15.76 million to an anonymous buyer stating;

“In view of the revelations from the so called Panama Papers showing the unethical and anonymous trade in high end antiquities for tax purposes or money laundering it is high time that ACE, the MA and the museum world insist that the UK Government ends the right to anonymity in Auction Rooms.”

“It would heap further disgrace and dishonour on Mr Mackintosh, NBC and the UK Government if it is found, thanks to continued diligent research by campaigners and lawyers, that the Sekhemka sale was used as a means to avoid tax or launder dirty money. We are confident that the truth will emerge.”

The statue of Sekhemka when last seen in public at Christie’s in July 2014.
[Image:  Courtesy of Mike Pitts]

While the Save Sekhemka Action Group has failed, for now, in its attempts to return the statue of Sekhemka to public display and expose the details of the sale by Northampton Council its dilligant, persistant and often brave campaign has managed to turn the sale of the statue into an international cause celebre for museum campaigners and humiliated Northampton Borough Council and its former Leader, David Mackintosh MP, turning them into a byword for unethical, unaccountable and short sighted museum policies, with Mr Mackintosh himself being named “Philistine of the Year” by Private Eye magazine in 2014.

In spite of the Northampton group standing down from direct campaigning the story of the Sekhemka campaign may still not be over.  thePipeLine understands that the Egyptian Government is currently considering whether legal action in the matter is possible, while researchers continue to try to expose the financial and contractual details which lie behind the sale of the statue in 2014 and whether the sale may shed light on the way Mr Mackintosh ran Northampton Council.  In particular the issue of why Northampton Borough Council repeatedly claimed to the public and Christies that it owned the statue, only to give the Marquis of Northampton half of the proceeds of the sale after it had paid the costs, remains open to question.  To that end the Save Sekhemka Action Group has undertaken to support such efforts from its now considerable reservoir of documents, knowledge and expertise.

Asked about the fate of the statue of Sekhemka a spokesperson for Northampton Borough Council told the Independent :

“We don’t have the faintest idea because we sold it nearly two years ago, so it’s something we are not kept informed about,”

The campaigners will at least find common ground with the Council over the first six words of that statement.