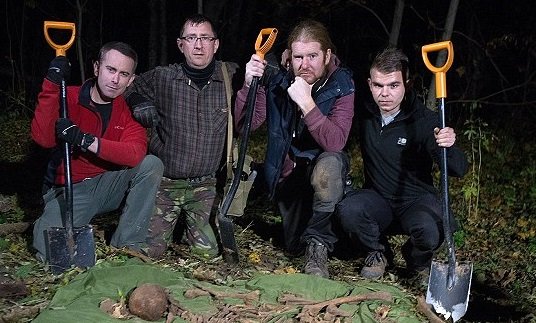 [National Geographic Channel:  Fair Use for reporting and review]

In what is probably the least well judged entry into the historical debate about World War Two [at least since Thursday’s cack handed contribution to Holocaust Studies from former London Mayor Ken Livingstone] London based production company, ClearStory have chosen to reignite the smoldering row about the controversial television series Battlefield Recovery [AKA Nazi War Diggers] with an opinion piece welcoming the decision of UK TV regulator Ofcom not to investigate the programme for breaches of the Broadcasting Code.  The strongly worded, but unsigned, article posted on the company’s website accuses critics of the series, which aired on Channel 5 in the UK in January this year, of forming an “online mob” and attempts to frame the entire argument in terms of a battle for freedom of speech with the programme makers and broadcaster, the injured party standing firm against an “…orchestrated online campaign by a small but noisy group of bloggers.”

However, thePipeLine suspects that by suggesting that all the critics of the series, which included the national representative body the Council for British Archaeology, the archaeological sector’s leading professional body, the Chartered Institute for Archaeologists and the most eminent learned archaeological society in the UK, the Society of Antiquaries, form part of the “mob”, all ClearStory have done is demonstrate what critics will see as their arrogance, ignorance and contempt for archaeologists and the wider heritage sector and ensure that the controversy will continue every time Battlefield Recovery or Nazi War Diggers, or whatever else the series gets called in an attempt to disguise its origins, gets mentioned.

In fact many will see the publication of ClearStory’s claim that they have been vindicated by Ofcom for what it almost certainly is.  A self serving attempt to reclaim the control of the narrative of the programme.  However, it is doubtful how successful this tactic will be as earlier attempts to shut down critics and promote the series on Twitter and on internet forums, met with limited success amid allegations of trolling and sock puppetry on the part of associates of the programme makers and presenters.

It is also the case that just because Ofcom has declined to investigate Battlefield Recovery formally it does not mean the series has been given a clean bill of ethical and legal health.  It has to be pointed out that the 175 complaints to Ofcom were judged on very narrow technical criteria related purely to the Broadcasting Code, and even more narrowly, on Ofcom’s interpretation of that code.  An Ofcom spokesperson has also confirmed to thePipeLine that the regulator took no independent expert advice on any of the issues complained about.  For example, on the important technical issues of the excavation of human remains and the safe handling of ammunition.  Neither did Ofcom investigate the repeated suggestions that ClearStory may have broken the terms of the archaeological permit  of their host Pomost in Poland, or ask why the programme set in Poland was never shown in that country, because those issues fell outside the terms of the Broadcasting Code.

Neither did Ofcom address the issue of how the programme was presented, and why, when according to this latest posting, ClearStory  “…wanted to highlight” the work of volunteer battlefield excavators in Latvia and Poland “…and bring it to life for a wider audience “, the vast bulk of the running time of the four episodes consisted of three amateur metal detectorists from the UK and an American reality TV presenter and dealer in Nazi militaria [who was not billed as such] digging up guns, bombs, and bodies and playing with sexy big boys toys, with scarcely a Latvian or Pole in sight.  Indeed, the production has also been accused of deliberately misrepresenting the work of Pomost by making it look as if excavations undertaken by Polish archaeologists under Government licence, were actually carried out by ClearStory’s amateur metal detectorists.

However, the essential truth of the series is given away by ClearStory’s own posting.  The company tries to present the Battlefield Recovery as a ratings success against the odds, stating;

“…700,000 viewers freely chose to watch each of the first two episodes of the series and around 450,000 watched each of the second two installments at a later slot.”

However, translated from TV PR speak into plain English, audience figures from the respected Broadcasters Audience Research Board [BARB] show that the programme made its début in a Saturday Prime Time slot and reached number twenty eight in the Channel 5 weekly ratings of its most watched programmes, with a total audience of 810,000 , rising to 820,000 after twenty eight days as people watched the series on catch up services.

However, the following week saw the audience fall substantially and Battlefield Recovery dropped out of the top thirty.  As a result the network, Channel 5, moved the programme to a less prestigious time slot for the second half of its run.  Perhaps unsurprisingly given the clear downward trend, the final programme managed an audience of just 368,000 in the weekly ratings.  In other words more than half the initial audience had deserted Battlefield Recovery by the time it ended its run.

That fall was not the result of the criticisms of a “mob” of archaeologists.  It was the action of people who had watched the programme and decided that they had seen enough of presenters who often did not seem to know what they were doing, talking about things they did not understand nearly enough about, show the same level of historical and cultural ignorance, unethical insensitivity and technical ineptitude, four weeks running.

ClearStory also ignored the first lesson of successful TV archaeology, which has stood from Meet the Ancestors and Two Men in a Trench, through the finest and best known example, Time Team to the latest iterations such as depiction of the search for Viking sites using satellite imagery by Dr. Sarah Parcak in the BBC’s The Vikings Uncovered.  That is, in television production terms, archaeology works best when presented as a CSI style Police Procedural with high production values and expert witnesses.  Creating a narrative arc based on process combined with characters the audience can enjoy spending time with attracts, retains and grows that audience.  Running around the Latvian countryside whooping and firing blanks from an MP40 sub machine gun, while it might be great fun for those doing the shooting, clearly doesn’t.  As a result it was Battlefield Recovery which fired the ratings blanks.

Meanwhile, quite why ClearStory have chosen to pour petrol on the embers of the Battlefield Recovery/Nazi War Diggers row by publishing such an inflammatory statement at precisely this moment is a mystery.

It is obvious that ClearStory was stung by the criticism the series received and the company may feel genuinely vindicated by Ofcom’s decision.  However, it is a golden rule of public relations that if you are on the wrong end of a negative story and that story starts to die down, you let the media and social media cavalcade, and the audience it carries in its train, move on to other issues.  Instead, ClearStory have adopted the opposite approach, publishing an article which can only reignite the row, weeks after Ofcom announced its decision not to investigate.

It is possible the company is trying to prepare the ground to get the series repeated,  sold to additional broadcasting networks, or even recommissioned and as a result want to head off any opposition before it starts. It may also be that having hunkered down and refused to engage with the critics by offering any meaningful response to the genuine questions the series raised, the producers could simply contain themselves no longer, so they lashed out in the manner of a petulent teenager screaming;

“No-one understands me, you’re all so unfair!”

However, to go to the barricades defending freedom of speech just to allow four amateur militaria collectors to tip a human skull out of a helmet, and risk blowing themselves up on camera mishandling explosives, runs the risk of what Monty Python used to call “hyper bowl”.  By overreacting like this ClearStory have just made themselves look ridiculous.

They have also made themselves look ridiculous in setting up a straw man.  No serious critic objected to the subject matter of Battlefield Recovery, just the botched, boring and unethical execution.  Genuine battles for freedom of speech involves journalists and activists taking real risks in the public interest.  Not a production company safely ensconced in “it’s tough up” North London, delivering cheap, lowest common denominator, dog whistle television.

Full disclosure:  I was one of a number specialist conflict archaeologists consulted [and then ignored] by ClearStory Productions at the time Battlefield Recovery/Nazi War Diggers was being prepared.