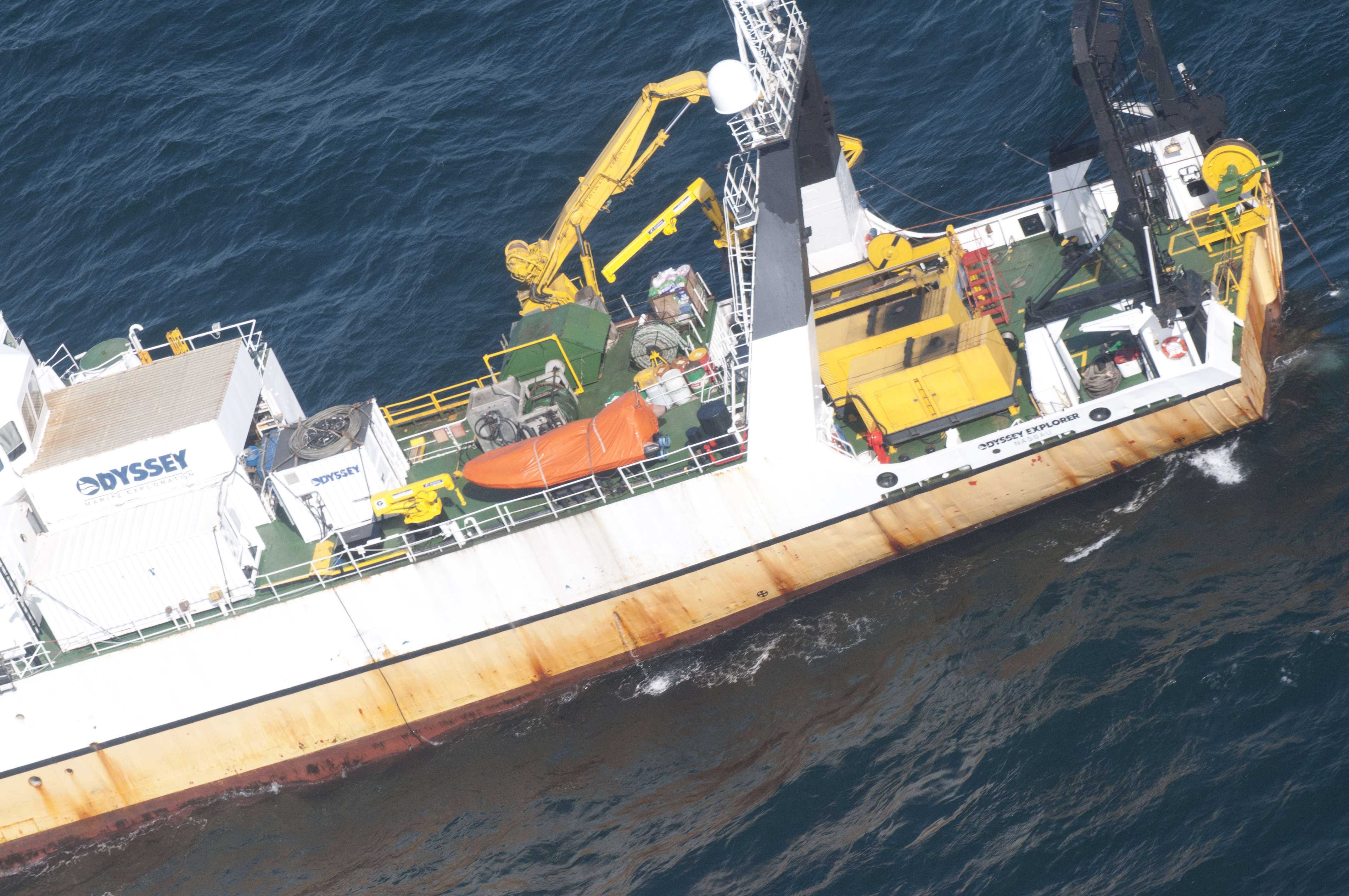 thePipeLine Exclusive:  Government of Cyprus has confirmed that the cargo of historic artefacts taken from the Odyssey Marine Exploration research vessel Odyssey Explorer in December were confiscated because they were aboard the vessel in Limassol harbour in contravention of Cypriot customs legislation.  Odyssey Explorer herself was also confiscated during the early stages of the investigation, but has now been returned to the company and permitted to leave Cyprus.

Mystery has surrounded the precise reasons for the raid by Cypriot Police and customs officials on Odyssey Marine Exploration’s research vessel Odyssey Explorer on 23 December last year [2015].  Until now Cypriot officials have only confirmed that the raid came as the result of a tip off that the vessel might have been engaged in illicit treasure hunting and that Cyprus had been aware of the vessel’s activities “for some time”.    However, thePipeLine is now able to reveal exclusively that the vessel’s cargo of over 500 ceramics and other artefacts, which it is believed were taken from at least one wreck site located in the Eastern Mediterranean between Cyprus and Lebanon, has been confiscated, because Odyssey Marine Exploration had allegedly violated Cypriot customs legislation in importing the artefacts to Cyprus.

The revelation comes thanks to information provided by a spokesperson for the Division of Energy and Marine Policy of the Cypriot Ministry of Foreign Affairs who told thePipeLine;

“The antiquities, which were the cargo of the Odyssey Explorer, were excavated from a marine area outside Cyprus’ jurisdiction. The antiquities have been confiscated, as the vessel was found in violation of the Cyprus’ customs legislation, and remain, for the time being, in the possession of the authorities of the Republic of Cyprus.”

“Efforts are being made in order to determine the rightful owners of the antiquities.”

It is understood from previous statements by the Cypriot Government that the Government of Lebanon is also involved in the investigation and that Lebanese officials would be inspecting the fifty seven crates of artefacts confiscated by Cypriot officials.  Information derived from the Automatic Identification System [AIS] a real time tracking system carried by vessels over 300 tons, suggests that the site where the artefacts were salvaged may be in the Lebanese Exclusive Economic Zone [EEZ] as defined by the United Nations Convention on the Law of the Sea. This is the maritime area stretching 200 nautical miles from the coast of Lebanon where the Lebanese Government can claim certain rights over the exploitation of marine resources.

The Ministry spokesperson also confirmed that Odyssey Explorer had also been confiscated while investigations were undertaken, but that the vessel has now been allowed to depart from Limassol.  Indeed, Odyssey Explorer docked in Beirut on Saturday [16 January].

However, even with their vessel released from custody in Cyprus, the episode still represents an acute embarrassment for Odyssey, conjuring up, as it inevitably will, memories of the unlawful recovery of 17.5 tons of silver from the Spanish frigate Nuestra Senora de las Mercedes in 2007.  An episode which cost the company over a million dollars in costs awarded to the Government of Spain and led to a US Judge castigating the company and its legal representatives for exercising “bad faith” for an “improper purpose”.

The run in with the law in Cyprus is particularly embarrassing coming so soon after the company effectively sold the bulk of the treasure hunting arm of the business to California coin dealers Monaco Financial LLC who have set up a subsidiary, Magellan Offshore Services, specifically to facilitate treasure searches with Odyssey Marine Exploration acting as exclusive service provider.  A move which, as well as clearing a large proportion of Odyssey’s crippling and near fatal bank debts, was supposed to herald a new era of lower risks, the guaranteed payment of search costs and income from the treasure hunting business, for Odyssey’s long suffering shareholders.

Mystery also surrounds just what Odyssey Explorer was looking for in the waters between Cyprus and Lebanon.  On previous deployments to the Mediterranean the vessel was linked to the search for the sailing vessel Napreid which sank in 1872 following a fire.  That vessel was allegedly carrying a cargo of rare Cypriot ceramics collected by Luigi Palma di Cesnola, the first director of the Metropolitan Museum in New York.  It has also been suggested the vessel was searching for the crash site of a Curtis C46 airliner belonging to Lebanese International Airways, which caught fire and crashed off Beirut on 3 October 1957 with the loss of all twenty seven passengers and crew and an alleged cargo of up to 380kg of gold coins.  However, other targets which could be of potential interest to treasure hunters are known to be in the general area and the fact that the company reported it had been paid up to $3 million for the current search strongly suggests that Odyssey Explorer was executing a commercial salvage contract, almost certainly looking for a specific target or vessel.  If that is the case then the confiscated cargo of 18th century ceramics, along with tobacco pipes and other domestic items which are likely to have belonged to the crew of the lost vessel, while interesting as maritime archaeology, are most unlikely to represent any kind of meaningful commercial return for Odyssey’s employer, let alone any investors involved.

All in all, Odyssey Marine Exploration now looks at best accident prone and at worst a serial alleged and proven offender in various maritime jurisdictions from the English Channel to the Levant.  This has the effect of ensuring that Government’s will be on their guard the moment Odyssey’s converted trawler, in its smart new blue and white livery, shows up.  All this means that it is likely that former CEO and now consultant to Magellan and Odyssey, Greg Stemm, will be facing some uncomfortable questions from senior management at Odyssey and Monaco, asking just how work by Odyssey Explorer has been allowed to find itself the wrong side of a legal dispute, again.

thePipeLine contacted Odyssey Marine Exploration and asked the company to comment on the Cypriot allegation that the vessel had been in violation of Cypriot Customs legislation.  However, up to the time of publication the company has not responded to our request.

In an earlier statement given to thePipeLine, Odyssey Marine Exploration claimed:

“The project has been conducted legally and Odyssey has not conducted any operations in Cypriot waters. Any statements to the contrary are false.”

The company also claimed to be subject to a non-disclosure agreement and was thus unable to give further details.