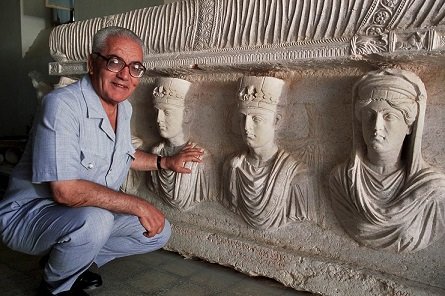 Khaled al-Asaad [Fair Use via Wikipedia]

thePipeLine names Khaled al-Asaad its first “Archaeologist of the Year” and launches “write in” campaign to have Mr Al-Asaad nominated for similar awards worldwide.

thePipeLine exists to try to expose anyone who damages our shared past out of ignorance, malice or the pursuit of commercial profit, and to name and shame the charlatans and purveyors of pseudo history in the Media.

That means we do not really go in for the annual round of merit awards.  Particularly as they are often defined in terms of “Buggin’s turn”, that is the idea that anyone who hangs around long enough, or makes a big enough donation to the awarding body or its friends, gets an award.

There can only be one Archaeologist of the Year for 2015, Khaled al-Asaad, the eighty one year old former custodian of the Syrian city of Palmyra who was murdered in the most brutal and humiliating fashion by Daish/ISIL on 18 August 2015; apparently after refusing to reveal where antiquities from the UNESCO World Heritage Site had been taken.

Among the supposed justifications for the murder, written on a placard placed around Mr al-Asaads neck by his killers, were that he had  represented Syria at “infidel conferences”, had served as “the director of idolatry” in Palmyra, and had visited  “Heretic Iran”.

In other words Mr al-Asaad had done his job as a researcher and communicator as part of the international archaeological community.

As Irina Bokova, the Director-General of UNESCO put it in a statement issued in tribute to Mr al-Asaad;

“They killed him because he would not betray his deep commitment to Palmyra. Here is where he dedicated his life,”

Dr Bukova added that Mr al-Asaad had contributed to;

“revealing Palmyra’s precious history and interpreting it so that we could learn from this great city that was a crossroads of the ancient world. His work will live on far beyond the reach of these extremists.”

“They murdered a great man, but they will never silence history,”

Most archaeologists are fortunate in that they will never have to face the kind of hellish, life or death,  choices that Mr al-Asaad and his collegues in Palmyra faced, including the Assistant Director of Laboratories at the Directorate General of Antiquities and Museums, Qasem Abdullah Yehiya, who was also murdered by Daish/ISIL  However, two choices that archaeologists do face, both individually and collectively, are how to respond to the murder of our colleagues for simply doing what we do every day and how to combat the crimes against culture and heritage which they tried to mitigate and of the kind which Daish/ISIL and too many others continue to perpetrate.

This leads thePipeLine and our affiliated Facebook Group “Mortimer” to urge anyone who defines themselves as an archaeologist, indeed, anyone with an interest in heritage, to put into practice the following simple two point plan.

Meanwhile, as  thePipeLine fervently hopes we never have to offer such an accolade again, we have no hesitation in making Khaled al-Asaad our first “Archaeologist of the Year.”

If you agree with us please pass on this article to colleagues and friends.