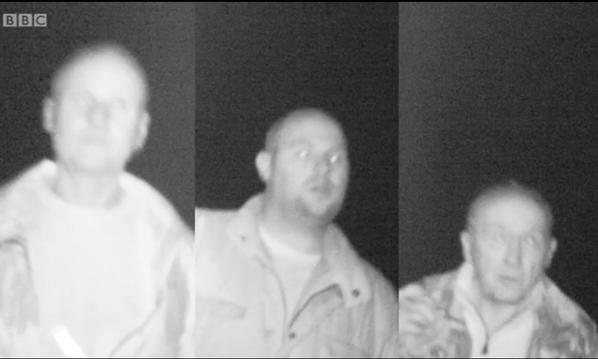 [Image copyright the BBC: Placed in the public domain by  the Police via Twitter]

The BBC Natural History Unit in Bristol has unrivaled experience in deploying motion sensors and camera traps to record the nocturnal antics of Britain’s shy and retiring wild life.    Now that same technology has been deployed to catch the rootling and burrowing antics of a much rarer and less attractive form of creature, the Greater Balaclava’d Nighthawk and the results of an experiment to monitor attacks by Nighthawks on scheduled ancient monuments, using the night vision technology more commonly seen and enjoyed in Spring Watch, were broadcast tonight [12 October 2015] in an edition of the BBC’s regional magazine strand “Inside Out”.  The package was the result of a stake out by the University of Bristol and the BBC who placed cameras and recording devices around a scheduled Roman site on a Gloucestershire Farm which, the programme claimed, had been repeatedly predated by metal detectorists digging illegally.  The equipment duly delivered images of three mature male individuals, dressed in characteristic camouflaged plumage, allegedly engaged in the nocturnal theft of shiny things.

The Nighthawk, more properly known by it legal name of Heritage Thief is a sub species of the more common Ligitimate Detectorist.  Although some archaeologists are unclear as to how to tell the difference between the two species, especially when it comes to the recovery of archaeological finds without recording or reporting them to the Finds Liaison Officers [FLO’s] belonging to the voluntary Portable Antiquities Scheme [PAS] and the sale of finds on E-bay.  All activities which some so called legitimate detectorists also engage in.  It was this difficult relationship between research led archaeology and metal detector users which was the principle problem with, what was otherwise, an interesting package offering a demonstration of a new method of fighting a hitherto intractable heritage crime the prosecution of which often required the perpetrators to be caught in the act.

While it was unclear from the presentation, it appears the film was shot with at least the knowledge, if not the cooperation of the Police and Historic England, as the package included a briefing session for Police Officers and a brief talking head section featuring Mark Harrison, Historic England’s Policing Advisor.  Mr Harrison and his colleagues have had a good deal of success in the last few years, as a series of prosecutions for damaging scheduled monuments and other heritage related offences, most recently the conviction of salvage diver Vincent Woolsgrove for theft and fraud relating to the protected wreck of HMS London, have pushed heritage crime up the policing agenda.  In that context it seems likely that this package had been intended, at least in part, as a way of warning metal detector using thieves that their card had been marked.  However, the package suffered from a lack of focus.

Perhaps because some members of the metal detector community are notoriously thin skinned when it comes to any form of criticism, rather than simply accept that the core subject for the evening was a simple issue of theft by alleged criminals who happen to use metal detectors, a good portion of the already short  running time of the package was spent with a sketchy discussion of how “responsible” metal detectorists are a good thing when they work directly with archaeologists.  This section then concluded with what an increasing number of archaeologists regard as standard platitudes about the efficacy of the voluntary Portable Antiquities Scheme and a categorical statement that there was no need to make the private use of metal detectors illegal in England, as it is in many European jurisdictions including Ireland.  This is a shame because that discussion would have been better left out completely and revisited on another day in a longer format capable of supporting the necessary counter arguments.  Indeed, stripped of the clumsy balancing padding, the package demonstrated clearly that the kind of intelligence led deployment of the surveillance technology used in Gloucestershire can work as an effective law enforcement tool in trying to combat heritage thieves.  In fact thePipeLine is aware that the same technology portrayed in the “Inside Out” package was deployed recently by the Police and Historic England on another sensitive threatened heritage site in the English Midlands after reports of illegal metal detecting.

The University of Bristol press release accompanying the report quotes Professor Mark Horton of Bristol’s Department of Archeology and Anthropology, who fronted the “Inside Out” package, as saying:  “We were amazed to catch several individuals working over a scheduled ancient monument digging holes with their detectors,”  While he might well have been amazed for the purposes of the dramatising the press release, the news that metal detector wielding criminals attack archaeological sites will have come as no surprise to the hundreds of archaeologists up and down the UK who have to risk assess and protect their sites from thieves 24/7, 365 days a year.  In a further example of what Basil Fawlty might have described as a “statement of the bleeding obvious”, Professor Horton added: “The fact that they were there between 10.30pm and 2am clearly shows that they did not want to be discovered.”  No manure Sherlock, the clear nervousness of the three alleged camo’ clad perpetrators and their sub Guy Richie, geezer movie demeanor and terse dialogue as they waited for getaway wheelman “Vlad”, suggested that the local FLO is not likely to be troubled with having to record their finds anytime soon.

However, for all its faults the programme segment did at least demonstrate that there now are at least two reasons for Nighthawking thieves to take on board that theirs might no longer be a totally risk free crime.  First what they do is now clearly identified as what it is, theft, and as such it is in the interest of the Police to investigate and prosecute the crime.  Particularly as in the last week it has been announced that heritage crime has been named as a specific factor which Judges and Magistrates can take into account in handing down sentences.  This means that it is likely that penalties for this kind of theft will soon become much tougher.  All very good for the Chief Constable’s clear up rate.   Second, now that the technology is proven and the juiciest sites are easily predicted, metal detecting thieves must always worry that they might be caught on the Rural Crime Team’s candid camera’s and tracked to and from the site just like any other criminals going equipped to steal.

Of course there is a third risk specific to Gloucestershire.  The County is one venue for the UK Government’s controversial Badger cull, by licenced sharpshooters, which means that for heritage thieves to go creeping about in the rural undergrowth in black balaclava’s and camo could be dangerous. It would be a tragic loss to humanity if any of the genus Nighthawk were taken out by mistake instead of Mr Brock.  Far safer to just attend one of the regular metal detecting rallies and not declare the finds to the PAS, all of which is perfectly legal.

If you an identify any of the three suspects in the BBC Image please e-mail:   chronos@essex.pnn.police.uk

If you have information about this or any other heritage crime you can also call Crime Stoppers UK on 0800 555111 or contact them via the Crime Stoppers Website https://crimestoppers-uk.org/