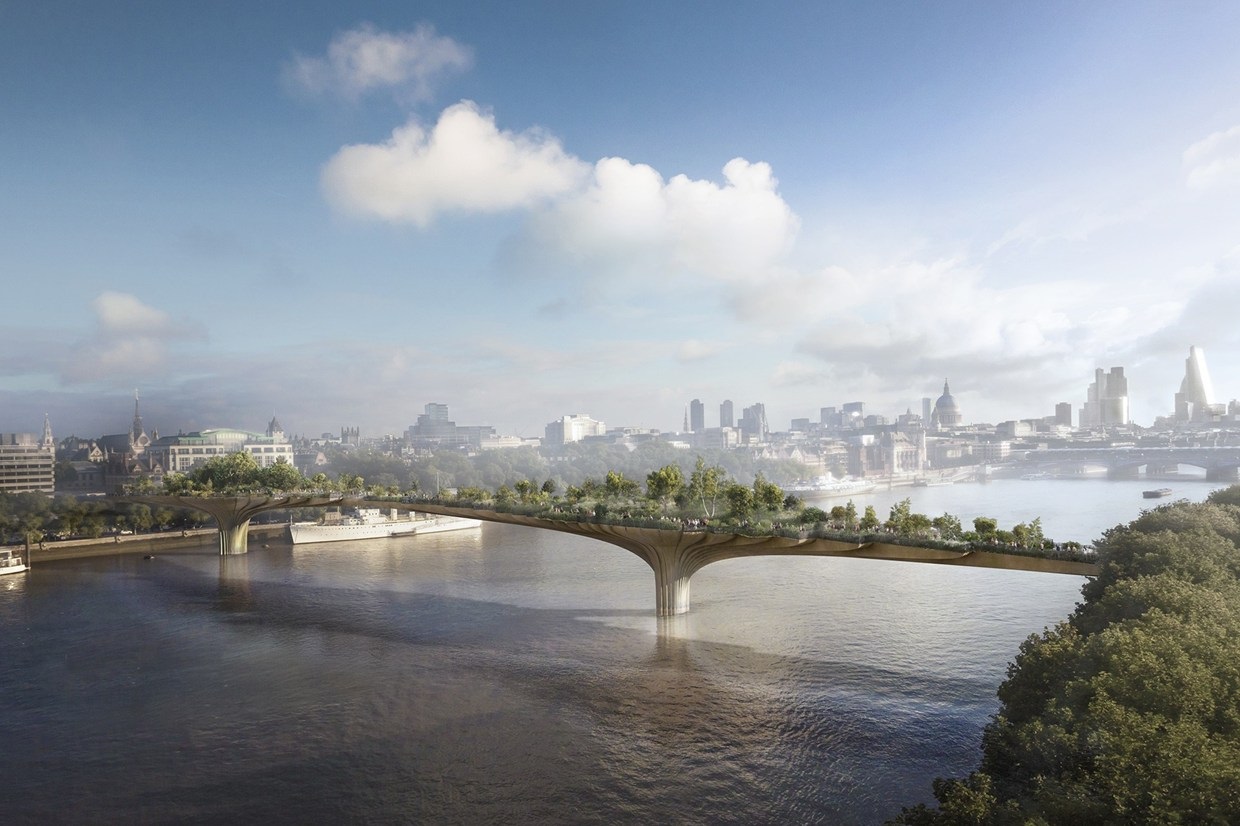 It all began so well this afternoon for the controversial London Garden Bridge Trust, its Executive Director Bee Emmott and Joanna Lumley, chief cheerleader/lobbyist for the Bridge and old family friend of the Mayor of London Boris Johnson.  The London evening paper the Evening Standard had published a glowing OpEd piece endorsing the bridge written by former Liberal Democrat Leader and Deputy Prime Minister Nick Clegg in which Mr Clegg described how he had put on a pair of “oversized hi-tech goggles” to enter virtual reality courtesy of the Garden Bridge Trust.  His virtual tour over, Mr Clegg duly announced that he was now a convert to what he described as the “Very beautiful”  plan to link Temple Station with the South Bank via a garden bridge designed by Thomas Heatherwick and garden designer Dan Pearson.  Mr Heatherwick’s practice won the contract for a central London pedestrian crossing, which Transport for London had not previously announced it needed, over two other architectural practices which were vastly more experienced in building bridges, but as Mr Clegg put it

“…I was sceptical, to put it mildly…And yet, bit by bit, I’ve been won over. Cynicism has given way to enthusiasm. I am a Garden Bridge fan.”

However alarm bells should have been ringing at the Garden Bridge Trust.  As any halfway competent PR Operation should know, the intervention of Mr Clegg, who is not even a London MP, was inviting trouble if not ridicule.  After all, Mr Clegg’s only previous known experience with Gardens was at the now notorious press conference cum love in, which took place in the 10 Downing Street Rose Garden alongside Prime Minister and undergraduate pig enthusiast [allegedly] David Cameron after the 2010 General Election and we all know how well that ended for Mr Clegg’s Party.   Even so, the article from the former Liberal Democrat Leader, who indeed resigned in ignominy after his party’s catastrophic performance in the May General Election, was duly welcomed by the Garden Bridge Trust’s official Twitter feed as “great”.  However, within minutes it had all begun to unravel.

First it was noted that one of the three reasons Mr Clegg gave for supporting the plan for the Garden Bridge and its privatised planters was “because it’s unwise to disagree with Joanna Lumley.”  Mr Clegg may have meant this as a joke, but if so it has backfired badly.  In the light of the recent hearing by the London Assembly Oversight Committee which only added to the questions over the ethics and even the legality of the Garden Bridge procurement process by London Regional Transport, Mr Clegg appeared to think that the risk of annoying an actor and friend of the Mayor is more important that protecting the public interest and finances from alleged favoritism, and accusations of unaccountable lobbying in the procurement of the Garden Bridge contract.

Then it was revealed that Labour’s newly elected Mayoral candidate, Sadiq Khan MP, would cancel the project if elected Mayor next May.  Mr Khan told the Evening Standard

“What we were sold is a long way from the reality we now face,”

“It has become another of Boris Johnson’s white elephant projects – like the Cable Car which is used by few at the cost of millions of pounds.

I believe it no longer represents value for money. This was supposed to be an entirely privately funded project costing £60 million, but the overall cost has tripled, and £60 million is being paid for out of the public purse, with a possible maintenance cost of £3.5 million a year – for a bridge which will often be closed to the public for private events and won’t be open overnight.”
http://www.standard.co.uk/news/london/sadiq-khan-id-scrap-garden-bridge-plan-if-elected-mayor-a2954742.html#commentsDiv

As if all that was not all bad enough it then became clear that Lambeth Council, which is crucial to the Garden Bridge plan because it control the southern landfall of the proposed airborne arboretum, had put negotiations for the sale of the required land on hold.  In a letter to London Mayor Boris Johnson, Lambeth Council Leader Lib Peck told the Mayor that the Council was taking this action because

“I have consistently said, during a time of severe spending cuts putting £30million worth of public funding towards this new bridge isn’t justified.  So while it might have other merits, it is surely wrong for TfL to issue a blank cheque, particularly given the financial pressures they face from the Chancellor.”

“It is also becoming clear that future mayoral support for this scheme is weakening.”

“…nothing more than a shameful exercise in political posturing.” while the paper also quoted insiders at City Hall as saying it was a “shocking U-turn”.

That other stalwart supporter of the corporatised copper kettles, the Standard itself, also weighed into the battle on the side of the Mayor and Ms Lumley with an editorial which concluded

“This is petty politics. There may be debate about aspects of the plan, including its location — though its central position is crucial and it would link Temple Underground and the South Bank — but of the value of it to delight those who use it and those who look at it there is no doubt. Mr Khan should think again.”
http://www.standard.co.uk/comment/comment/evening-standard-comment-sadiq-khan-should-back-this-river-oasis-a2954836.html

However, in the other virtual reality of electioneering an opinion poll of 1000 London voters conducted by Survation, published on 17 August, put Mr Khan on 50% of first preference votes and his Conservative rival for the Mayoralty Zac Goldsmith [a Garden Bridge supporter] on 37%.  The election is by single transferable vote where voters rank candidates by preference and the lowest scoring candidate is eliminated at each round and their votes redistributed until one candidate scores 50.01%.  Thus, such a result, if replicated in May, might be enough to see Mr Khan home in the first round and confine the Garden Bridge to the great dropbox of history.  That is unless the Garden Bridge Trust can come up with enough money quickly enough to satisfy Lambeth that the bridge can be built and operated without public money and get construction work started before the mayoral election.  That is easier said than done.

One potential source of funds, the Qatar Sovereign Wealth Fund allegedly took a $4.6 billion hit this week over its exposure to mining conglomerate Glencore the shares of which have been tanking and the Volkswagen emissions scandal, so one of the City and the Mayor’s favorite investors might not have much spare cash.  Meanwhile a further bail out from City Hall or the Treasury is unthinkable given the questions which are being asked about how the £60 million of tax payers cash already committed to the privatised privet came be fished out from the back of the sofas in Boris Johnson’s office and Downing Street.  That being so, tonight it looks as if Joanna Lumley might have to ask her other political BFF, Chancellor George Osborne, to tap up his new Chinese friends to see if they have any cash left over from buying HS2.  After all, in 1860 the British Army trashed the beautiful and irreplaceable gardens of the Beijing Summer Palace, so for the Chinese, trashing the iconic views of St Paul’s Cathedral and the River Thames in Central London might be sweet revenge.