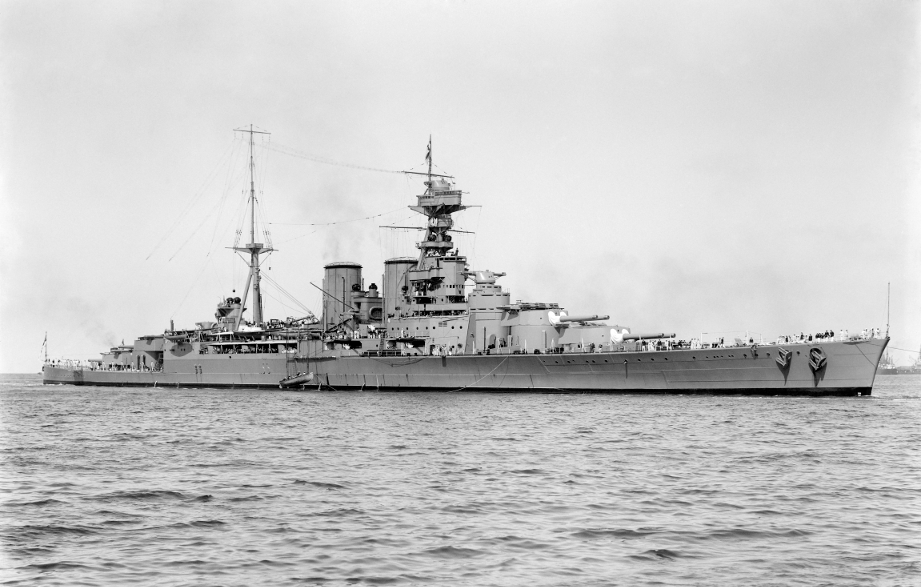 “The Mighty Hood” photographed in 1924

[Public Domain via the State Library of Victoria]

thePipeLine does not usually cover conventional archaeological news stories, neither have we been slow to explore the Ministry of Defence’s seemingly unique ability to create a “Thick of It” style “omnishambles” when it comes to the administration and protection of historic Royal Navy wrecks.  Particularly a certain wreck in the western English Channel sunk in 1744.  However, credit where it is due.  The recovery of the iconic ships bell of the famous and ill fated battlecruiser HMS Hood from a depth of 1.7 miles in the remote Denmark Strait between Iceland and Greenland, by an expedition funded by the co-founder of Microsoft Paul Allen, is worth a mention; both as a technical achievement and because of the important principles regarding the approach to the research of historic lost Royal Navy warships and their protection against the clear and present threat of illicit salvage and looting which the conduct of the expedition by all concerned, including the Ministry of Defence, reinforces  http://www.paulallen.com/news/news-articles/hood-bell-recovery.

As the press release announcing the recovery concludes, the expedition was both appropriate in that it provides a memorial to a ship and a crew which are still very much a part of the consciousness of both the Navy and many families and also “… the recovery has prevented it [the bell] from being taken by any illegal operation for personal gain.” In other words the parties to the recovery acted to pre-empt the potential efforts of the less scrupulous members of the salvage industry who now have access to deep water ROV technology capable of reaching down to wrecks like Hood and using them as commercial sources of non-ferrous and pre-nuclear metals and collectors memorabilia.

Even though the wreck of HMS Hood is less than one hundred years old and so does not fall under the terms of the  UNESCO Convention on the Protection of the Underwater Cultural Heritage [2001], this is an expedition which has been keen to observe all the proprieties appropriate to the disturbance, however minimal that disturbance is, of a maritime military grave.

Far from being the result of high profile speculative commercial salvage, the low key 2015 recovery expedition to the wreck of Hood took place with the permission in advance of the Ministry of Defence and the support of key stakeholders.  This was necessary not only because the shattered remains of the ship is a designated wreck under the UK Protection of Military Remains Act, but because the ship also retains Sovereign Immunity [SI] under international law.  This means the wreck cannot be touched without the permission of the Flag State, in this case the UK.  The potentially highly emotive human angle was also negotiated in advance, with Mr Allen’s team, led by David Mearns of Blue Water Recoveries Ltd, securing the support of the HMS Hood Association [ http://www.hmshood.com/ ] The Association was set up to remember the career and crew of what was the largest and most famous ship in the Royal Navy during the 1920’s and 1930’s.  The current President of the Association is Rear Admiral Philip Wilcocks.

Admiral Wilcocks’s uncle, Able Seaman Eric Wilcocks, was one of the 1,415 officers and men of Hood who were lost when the ship blew up while exchanging broadsides with the German battleship DKM Bismarck and her escort, the heavy cruiser DKM Prinz Eugen, at dawn on 24 May 1941.  Finally, the issue of conservation and curation of the expedition’s material objective, Hood’s ceremonial ships bell, was ensured through the involvement of the National Museum of the Royal Navy at Portsmouth.

The Museum will house the ship’s bell in its permanent collection once it has undergone conservation and as such will provide a tangible memorial to the relatives and descendants of the lost crew of Hood.  It is this sense of connection with a lost vessel and her crew, which evidence increasingly confirms can extend over many generations, which make the issue of the protection of historic wrecks from exploitation so sensitive for the Government and heritage regulators.

However, the apparently textbook case of an ethical recovery of a significant historical and  archaeological artifact from the wreck of Hood; the bell itself was inherited from the previous battleship Hood and given to the battle cruiser in memory of Rear Admiral Sir Horace Hood,  lost when his own ship, HMS Invincible, blew up at the Battle of Jutland; also makes it all the more inexplicable that the Ministry of Defence so frequently finds itself in difficult and controversial waters over other lost warships from World Wars One and Two.

For example, the Ministry of Defence has consistently refused to designate wreck sites automatically, a limbo into which fall the three cruisers of the so-called “Livebait Squadron” HMS Cressy, Hogue and Aboukir and their 1459 lost crewmen as well as the Hospital Ship HMHS Anglia  have fallen.  While even where vessels are designated, as in the case of the main Jutland wrecks, including Admiral Hood’s own flagship Invincible, the Ministry has, up until now, refused to take active steps to monitor and protect the sites and prosecute the looters who have been shown to have removed valuable metals from the wreck sites, including manganese bronze propellers and copper boiler room condensers.

Given the proactive, ethical treatment given to the efforts to investigate Hood, it is perhaps also ironic that Hood’s consort at the Denmark Strait action was the battleship Prince of Wales which was herself sunk with the loss of over 800 of her crew just six months later off the coast of Malaya and her wreck too is currently also threatened by illicit salvage.  Campaigners for the better protection of Britain’s Royal Navy heritage and the memory of the crews for whom the wrecks of lost vessels are their grave and memorial, will hope that the apparently wholly ethical and appropriate treatment of the recovery from HMS Hood and the recently announced intention to undertake a survey of the wreck site of Prince of Wales with the Royal Malaysian Navy, with a view to assessing precisely how much damage has been done to the wreck, signals a change to a more proactive approach to the protection of lost vessels on the part of the Ministry of Defence.

The Ministry of Defence would then only need to apply the same policy of respect for the historic nature of the sites and the crews whose graves and memorials they are to all other lost Royal Navy vessels of all periods, to  be applauded, not just by the maritime archaeology community, but also by the public.  The only group with anything to lose from such a policy are the commercial salvors and treasure hunters who would seek to treat the lost ships and dead sailors of the Royal Navy as a potential source of the personal gain so expressly excluded from the Hood recovery.

The conserved bell recovered from the wreck of HMS Hood, was unveiled in a ceremony at the National Museum of the Royal Navy [NMRN] on 24 May 2016, the 75th Anniversary of the ship’s sinking.

The unveiling was carried out by Her Royal Highness the Princess Royal in the presence of descendants of the crew of “the mighty Hood” and is now on display as part of the NMRN’s new exhibition commemorating the centenary of the Battle of Jutland.  This marks a direct connection with the battle because the bell was retrieved by Rear Admiral Sir Horace Hood KCB DSO MVO when his, and the ship’s namesake, the previous HMS Hood was scuttled as a blockship at Portland Harbour in 1914 and Admiral Hood was killed in action at Jutland when his ship,  the battlecruiser HMS Invincible, blew up and sank.  It is one of the ironies of history that Hood, which was launched in 1918 by Admrial Hood’s widow, and which was supposed to embody lessons learned from the destruction of the three battlecruisers at Jutland, succumbed to the same massive magazine explosions caused by shells penetrating her armour, which destroyed her older half sisters.

The conservation of the bell was undertaken by the Mary Rose Archaeological Services and managed at Portsmouth Naval Base by BAE Systems’ Non Destructive Examination Centre in collaboration with the Naval Air Squadron, as part of the company’s community investment fund.

The conservation project was funded by David Mearns, the director of Bluewater Recovery who said “I am extremely pleased that we have been able to fulfil one of the last wishes of Ted Briggs to recover the ship’s bell as a memorial and we are delighted that it is now on display as a reminder of the service and sacrifice of her men.”

Ted Briggs, who died in 2008, was one of just three survivors from the explosion and sinking.

Mr Mearns, who also located the wrecks of HMAS Sydney and the German commerce raider Kormeran which sank her,  was recently in the news regarding his involvement with the archaeological excavation of a much older wreck; the Portuguese galleon Esmeralda which sank off Oman in the Persion Gulf and which was excavated by a team drawn from Bournemouth University and the Oman Ministry of Culture.